Guardian Ghost of the Description Thread
20537

Close
Life is a story. Which is the one that defines you? 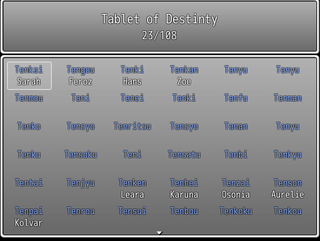 A humble tribute to the Suikoden series!

10/03/2022 11:28 AM
A bit of a visual update to the Arcomage mini-game. I wanted to relay victory condition values to the player in some way. I'm not 100% sure if having them displayed as "maximum" values is the best way to do it, but, it's kinda technically correct as well.

10/03/2022 12:39 AM
On a lark, I reinstalled the Price of Loyalty expansion, and putzed around (as one does in a HoM&M game). But then I thought, what if I LPed the campaigns? It's quite the act of necromancy for this thread, though, this is the Month of Necromancy, isn't it? XD

Anyway, as a brief primer, the Price of Loyalty expansion adds new artifacts, places to visit, four self-contained campaigns, and, as noted before, a new set of tracks for each of the castle types. The cost of these features, however, included a fix to hero stats so that they would not fall below 0, nor rise above 99. I'd certainly have to deviate from my usual play-style due to Armageddon no longer being able to deal negative damage!

While I might not mind changing up my play-style (have no doubts that I would still UGE the hell of of my games), the question, though, is if there is any interest in expanding this LP into the Price of Loyalty content?

If nothing else, while looking around for ways to maybe mod the game so that Armageddon could deal negative damage, I found an awesome metal cover of Combat 3, my favorite combat theme in this game.

...this that ran without issue. Which is not to detract from your issue, since you've got more going on than this. I'm not 100% sure if I should also post the pseudocode of these Common Events I'm running so that you can check against what those are doing versus what you're doing.

10/01/2022 05:16 PM
The game that you Release Something for within the context of this event need not be a horror game! The event just so happens to be occurring in this month, and the event-page has been themed/painted with Halloween/horror in mind.

10/01/2022 01:07 PM
October is generally when I play Castlevania - Lords of Shadow. Though, I think, last year I played Darksiders 2 instead. This year might be either Resident Evil 2 (the PS1 version) or Resident Evil 4 (the PS2 version).

*Edit: Welp, forget this idea. My controller is crapping out like there's no tomorrow. Like, I tried throwing down some Dynasty Warriors 8 Empires, and it was doing things I wasn't even aware was possible with a controller. Taking sreencaps? Adjusting my system volume? Restoring closed windows? Moving my mouse with the left analog!? What the Futch-and-Bright?

10/01/2022 11:13 AM
I generally use Common Events to determine encounters, so, I might take a look at how something like this might work or fail to work later.

10/01/2022 11:02 AM
September numbers are up! The total nomination count is 89 which is an increase of 53 nominations from last month! This more than doubles the count from August.

Relative to last year, the total count as of September was 68 nominations less, with the increase of nominations being 15 nominations greater. How will October fair? Only time will tell.

That wall you could climb. Was it near the Heal Glyph? When I initially playtested coel's first half, I could not figure out why it was there when it didn't seem possible to reach it. I then modified the map so that I could get to it. If the wall by the branch is climbable, it did not occur to me to try climbing it!

There was a feeling, a possibility, of this game evolving into a survivor-craft. So, like, having players deal with the curse, while collecting resources to either build a boat to get off the island, make shelter, craft more/better equipment, etc. However, that's a gameplay loop I'm not particularly interested in.

Though, you have a point about the ending being rather abrupt. It kinda ties in to not wanting to prolong the game with grinding for resources to build (or rebuild?) a boat, but, I might not have considered writing a cut-scene to bring things to an end than, well, just cutting it off at the defeat of the kracken. XD

This was an interesting game to receive, since I'm terribad at making puzzles. There was at least one area/puzzle from Jeroen_Sol's half that I wasn't sure how to arrive to the solution without looking at the events. I left it unmodified, regardless. For what it's worth, I already felt bad for modifying this area/puzzle because the original version lagged so hard on my computer. ;_;
Pages: first 1234567891011 next last