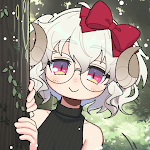 Close
Ah, well.. Look at you! You seem to have stumbled upon my profile!
Hello there! I.. I don't really make games.. I am on this site to look for new games to play and what not! I love playing these little RPG Pixel games I keep finding around here.. And well.. That's pretty much what I do.
I find games and play them in my free time!
I have only finished about.. 31.. But if you'd like to know which ones I've played, just send me a PM! (I don't think my list will fit here..)

10/01/2016 05:59 AM
Aaaaa!
I've been waiting for this one since I played the demo a year or so ago. I heard a few people talking about it, calling it a must-play, so I was super excited to play the full version!

Still fighting my way through it. These jump scares will be the end of me, hooo. ; u;

02/01/2015 07:54 AM
Holy moly. I just played this demo.. And it is just so dang cute! I just want more and more! I checked the blogs and tweets and oh my! The art is coming along very beautifully. I absolutely cannot wait for the full game! Love the art, it's so adorable! And the voice acting too! Very cute. ♥

3. What are some questions you want answered the most in the full game?
Show
-Who's the hooded boy? (Anyu, duh)
-What are these.. "Things?"
-And why are these "things" murderous beings?
-Why do they kill people who have powers like the Goddesses?
-Is Lenine Mika's dad?
-Is Euphy Mika's mom?
-Why is Euphy's name Meiko in the prologue, but Euphy in chapter 1?
-Why did they capture Mika?
-What happened to Mika?
-What happened to the boy in the prologue?
-Why doesn't Lenine like mirrors?
-What do the "things" want with the princess?
-Is the princess hiding something dark?

4. What do you predict are answers to these questions?
Oh man.. I can't even begin to answer them..
Show
I think that Euphy is Mika's mom.. but I don't know why she has two different names.. I think Anyu might be the little boy from the Prologue.. evil evil.. tsk tsk..
AND THE PRINCESS IS INDEED HIDING SOMETHING.

5. Which characters do you find the most curious or interesting? (Can overlap with #1)
Rainer is pretty funny.. You go to look in his diary and it's like.. "LENINE I KNOW YOU ARE PEEKING SO GET OUT OF MY ROOM!! >:("

6. What do you generally think of the story so far?
The story is pretty interesting! I want more of the story -- So many unanswered questions! (I'm also hoping Mika runs into the Princess in castle and such.. I want to see what is going to happen!)

7. What particular scene(s) did you like in the demo?
I liked the flashbacks in Chapter 1! And the spooky things in Chapter 2 when you have to make your way back to the Princess's room.. All the signs and such were messed up! Kinda funny.. But some were scary too.. All the npcs followed me....

8. Favorite chapter and protagonist?
Oiiiiiiiiiiiii... this is a hard one.. I liked all the chapters.. :c.. Probably.. Lenine's chapter.. Cause Rainer is a funny guy. But I also like the princess..

9. … Pairings/Ships, do you have any?
LENINE AND RAINER.

10. Was it scary?
Omggg. yes. Even from the beginning.
Show
I left my room in the beginning, leaving the door open and stuff.... then I jumped in the hole.. and it like.. FLASHED IN MY FACE -- something about closing the door. and i was like.. omg! this game is going to be scary. so i closed the door cause I didn't wanna die.
also in the veeeery beginning when Mika's mom was talking to her.. and then it flashed to Mika's cell. omygoodness. I was like UHOH. THIS ISN'T REALITYYYY.
THEN THERE WAS THE LADY AT THE BALCONY. OMG.

11. What’s your favourite part to play through?
Show
NOT HIDING. I KEPT DYING.
I didn't know what to do.. so I had to check the walkthrough.. //shot.
I BARELY MADE IT IN TIME! :C

Nah. Hiding was fun. Running was fun too -- Even if in the prologe I almost cried because the Alchemist almost got me. ; n ;