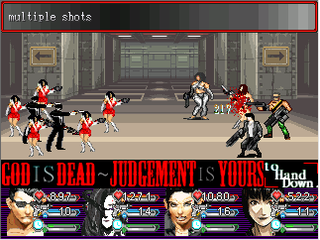 author=Darkspinesupersonic
These are three screenshots from a game I am trying to make. (Which has come along very well)

This image is from the first town the player encounters. 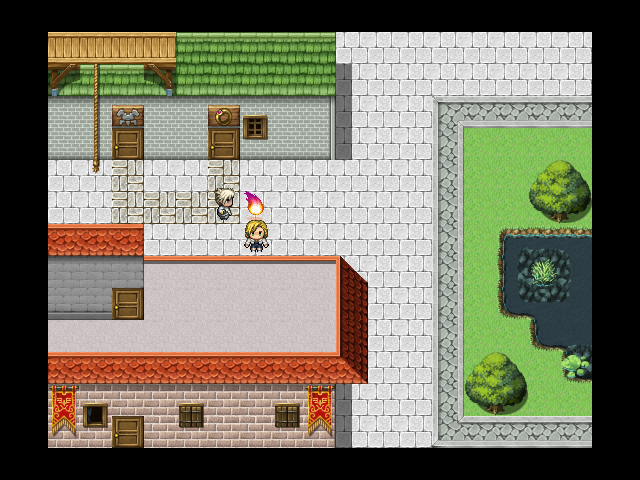 This image is from the hallway of the player's house. 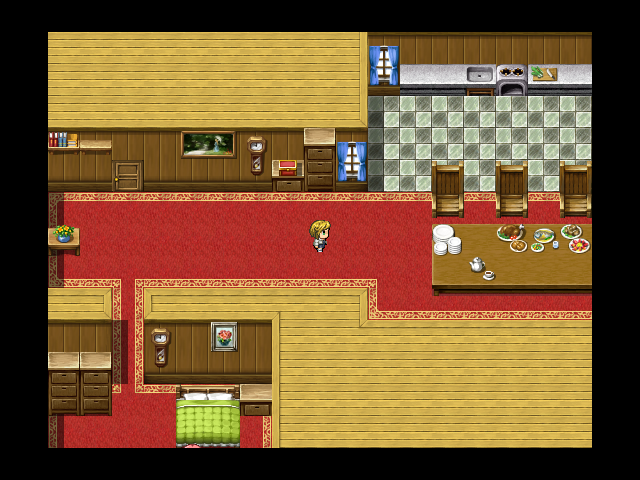 This is just the outside of the player's house. 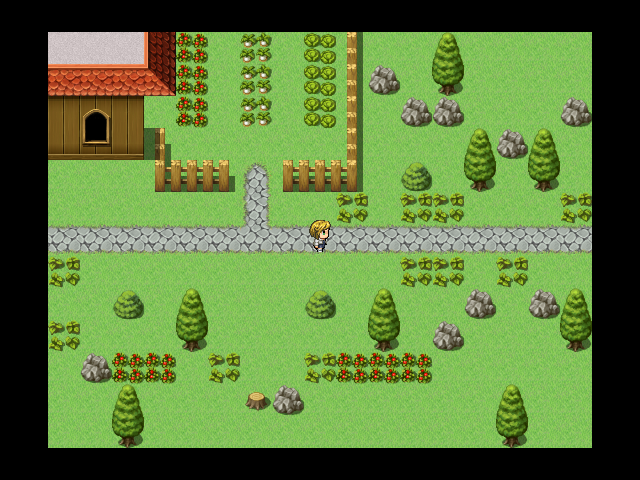 What do you guys think of them?

The mapping is really well done, however there still is the roof and wall problem in the last screenshot.
What's the reason behind leaving it like that? :P
Cannot wait to see battle screens too! :)

author=Addit
Look at his "pastry white skin!" And that green bow in his hair... WHAT ARE YOU TRYING TO DO TO HIS MANHOOD!?

That's pasty. As in, resembling paste. Though, it might work both ways for the Pillsbury dough boy.

Starting work on a custom save load (I was literally forced to, because my Game Plus starts from a new game). Managed to get the text to stand out, for once. Having a bunch of visible crap is not my thing, I'll save that for when you try to select load (also, I've decided not to use DynText in this one because I've got too many plugins already).

05/26/2013 04:07 PM
@ThatBennyguy:
Here are some things I pointed out for you :P
Not bossing you around or anything, but I think these have to be fixed to make the map look more natural, lol. :P Holy shit, that must be like, the best revival animation I have seen in my life! LOL :P
(like, honestly)

HEY GUYSS!!
Which one is better? :\
The lighter colored one or the darker one?

author=NOACCEPTANCE772
The rape and murder scenes are not the only scenes and I am not saying they make the story deep.:P

Aww, don't worry :)
Those are not the only horrible things you'll witness in the game! :D

LOL, I was thinking of it before and a friend of mine, who is a huge fan of furries suggested it but.. nah, fuck it. :P LOL!

Excuse me?
I am not telling you to admire it.
I don't implement it to look edgy either.Do you like to pick fights with everybody here or something?
EDIT: Woops, took you for somebody else.
But anyhow, haters hate.What am I supposed to do? ;)

author=NOACCEPTANCE772
The rape and murder scenes are not the only scenes and I am not saying they make the story deep.:P


Aww, don't worry :)
Those are not the only horrible things you'll witness in the game! :D

author=SnowOwl
@NOACCEPTANCE772
An example of sprites not fitting together would be the bikers in white clothing.
They have clear black outline and not much in the way of detail.
The bikes, however, is really detailed and has no outline.
The blood flowing from them in buckets also is extremely grainy and looks like you just put various big squares of slightly different shades of red together randomly.

Obviously I am aware you're not showing the whole game here. I'm sure there are lots of rape and murder, but rape and murder doesn't automatically equal a deep story and good dialogue.
I could give you heaps of examples but I'm going to give one I feel is very similar to your game: 90% of action flicks made from 1980-90.
Which just makes me say this again. Your game would be alot better as a side-scrolling shooter game, at least that is the feeling I get from the parts shown here.

Yeah, you're like, 98% right here.
I gotta change those damn motorbike cop sprites.They are so damn hideous.LOL xD
The blood too.I am planning on redoing it all.Completely.

The rape and murder scenes are not the only scenes and I am not saying they make the story deep.:P
The story is different and once you go through the game for the first time, your head would be pumping.LOL

Yeah, I know.All the action scenes....well I am not sure of them.
I like making it like the old stuff, like old animes and so on. :\
I would love to make this a side scrolling shooter but RM2K3 is the only program I can use when it comes to game making :(
I was originally aiming to make a 3D game when I got into game making but it is just so complicated :\
it took me like, 4-5 years to fully understand RM2K3 :|
Among all other things, there are other things in my life, like my shitty exams and college and stupid, pointless, worthless shitty drama with ignorant numb nuts :\
So yeah, this is all affecting my game making abilities and makes me want to quit completely after whore of babylon :\

Finally, some good and elaborated criticism.Thanks, SnowOwl and AlterEgo. ;)
~♥

author=NOACCEPTANCE772
Can you please give other reasons as to why you think it is a "Joke Game"?

I was just being facetious (kind of). Like I said, the cartoonish amounts of blood, the "Let's Dance!" before every battle, the seemingly unfitting Japanese music and other assorted sound effects, kind of leave a 'funny' taste in one's mouth. And the dialog is not very 'inspiring' either...
I know you have come a long way so I don't really feel like criticizing your game, but I'd say it still needs some polishing.

@Mr_Detective: I'd say go for the bottom one, but I think the windows are really out of place there. People would get distracted and look outside instead of at the screen. xD If anything, the windows should be at the sides, but you'd need "lighting effects" for that...

LOL, the blood is to be like those animes like Hellsing and so on, where one shot = Niagara falls amount of blood.LOL :P
The DANCE!! before a battle indicates that there is NO ESCAPE so you should make it like a dance! ;) lol
I am not sure when it comes to the music. :\
I cannot really find any music that suits the game and these are the only songs I could say "Fuck it, I am using this" about. :\
Fact: I never play a song twice unless it is a theme song or a battle song.
Will do some polishing :)
Almost everything here are placeholders.
Once I am done with this game, I am gonna polish it up, make it all shiny then throw it at the public.lol :P

Thanks for giving me your opinion thou!
It is much needed :)

It's so hilariously over the top in everything it does, combined with the points alterego makes, being super random and making no sense whatsoever,

The game is supposed to look uber random :P
In what ways do the sprites not fit together?
Nobody seems to have a problem with them.Most say they do fit. :\

Anyone looking at it would see it as a joke game. It kinda gives me the vibe of a kids cartoon, except bloodier and with more hilariously "deep" dialogue.

You know I am taking a few segments from the game.Right?
Because the parts I do not show have sex and nudity.
There is a boss battle before the protect the taxi stage.
Before before the battle, there are a couple of men fucking and humiliating a chubby, busty Indian prostitute until The goddess, Yellamma, appears, destroying the place and killing everybody but your party.LOL! xD
I cannot show that segment due to the rules of this site but that is not the only thing.There are more horrendous scenes that are more cruel, bloody and horrible.Don't worry ;)
Anyhow, there is better dialogue.All that crap is just holding place for the dialogue that comes when I am in the process of polishing the game.
The game is supposed to look mind-numbingly random.
Thanks for your opinion too!

author=alterego
Well, I didn't know this was a joke game (All that blood, among other things, were hilarious), so I'm actually kind of relieved. ;P

The only thing that bothered me was that some motorcycle enemies just appear from nowhere at one point in the second video. That kinda ruins the immersion of the battle. You should make an animation of them coming from the left or something; It shouldn't be hard.

Can you please give other reasons as to why you think it is a "Joke Game"?
I put a bit of humor in it because it is not supposed to be dreadfully serious and violent at the same time.