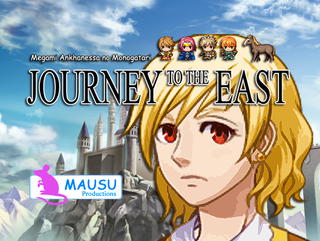 Journey to the East

A girl on a dangerous journey across the war-torn land of her country. She must survive!

Changes to game page reverting back

01/18/2021 10:10 AM
Hi, I made an edit to my game page yesterday, but when I checked it the following morning, it reverted back to how it was before. I'm wondering if I've done something I shouldn't have, causing a mod to change it back.

Also, this question is specifically for the admins. I wrote a novelised version of my game and it's on Amazon Kindle. Am I alright to link to it from my game page?

04/28/2019 07:37 AM
Not sure how it happened but all of my games and everyone else's made using Maker MV are running at 75fps instead of the proper speed (For me, it should be 30FPS).
I've not touched it in the editor, and it is the .exe (final product) I'm talking about that is affected.
My guess is a windows update I don't know about that changed how MV games run on windows 10.
My monitor is at 75HZ and has always been at that refresh rate, so that shouldn't have been the issue in the past.

I have recently received reports from players that the game randomly crashes and shuts down especially when entering the inn in Artisala.
I would like to know the extent of the problem and whether it's the players computer, the game or both, that is causing the crash.
This is for version 1.03, but previous versions are not too different since plugins are the same and no new ones were added since ver 1.01.
I would like to put in a request for people who haven't played the game to playtest it for crashes. State, if any, where and how it crashes, and whether there is an error message, and how far you've got into the game.

Anyone interested, I can send you a save file where it puts you right in the middle of the game, if you do not wish to start at the beginning.
Thanks.

05/28/2018 06:49 AM
Anyone having problems uploading files onto mediafire, recently?
Very slow and erractic upload speeds, and keeps failing.

Recommendations on other sites I can upload?

04/21/2018 08:08 AM
Is there a Japanese equivalent to rpgmaker.net?
I want to make my presence known in the Japanese community, even though it's a long shot.

03/31/2018 07:06 AM
How do I add extra tabs onto the game profile page such as walkthrough/hints, characters etc.
I want to split the summary page up to speed up load time.
Sorry if noob question.