Close
Author of: Dragon Quest - Legacy of the Lost 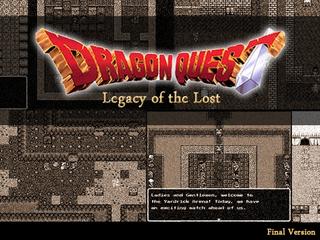 Apocalypse should appear in the alchemy list with those ingredients. I don't recall ever having it not show up before. I don't think I made it only appear if you were on Melody's Relic Weapon quest, but it sounds like you are. In order to do her quest, you have to talk to the old man in Erdrich Castle Town and listen to his story and obtain the ??? necklace from the present unmarked beach in Yu'Tolio. It is possible that is required for Apocalypse to since the relic master will ask for it, but I don't think so.

author=MatthewR101
Wait...so the final patch is the full game? Sorry, I kind of got confused which file to download. I downloaded the most recent one that said it was a patch and it works.Sorry, I'm not used to downloading games on this site...

Yes, the final patch is the full game and last version. :)

author=ablahblah987
This was such a great game - just as fun as an official title. I highly appreciate its making.

Will there ever be a sequel? I realize that would probably take a crazy amount of time to pull off.

Hi there! I am glad you enjoyed the game. :)

At this time, I haven't really thought too much about a sequel. I have had some ideas of what a sequel would look like and even come up with a partial story, but ultimately, I haven't put any real work into it.

I had also thought about making the sequel a Tactics style game like Tactics Ogre or Final Fantasy Tactics instead of traditional Dragon Quest. With monsters/DQ classes, I think it would be really interesting.

A sequel is still really unlikely, I'm just too busy at this time to work on another one.

author=PBandJesse
I know this is a late reply, but I just now noticed the guide about monster breeding, and I totally missed out on the slime. Hopefully, I can go back and get it, but, more importantly, I wanted to know if there's a picture list of all the monsters, or at least base monsters, that you can get. I'm new to Dragon Quest and I'm very curious, as the monster design matters to me more than whether or not the monster is "good."

Hey there! For recruiting slime, unfortunately he is flagged as missed if the boss of the Rhemhage Region has been defeated.

As for the graphics of the monsters, I put an image of them in a zip file that you can get here. This is the "Pictures" folder of my project and it should have all of them.

01/28/2018 05:28 PM
Hi, just started playing through this a few days ago! So far, game is pretty fun! I have just received the Diving Gear and found Godot in Lindblum. He asked me take some key to "Altair" and I don't know where that is?

Any help would be appreciated!

EDIT: Nevermind! I forgot that random town I visited near Kaipo was called Altair!

There are 41 tinymedals in game (you only need 40), but yes, unfortunately it is possible to miss some. While the item you get for 40 tinymedals is quite good, it isn't gamebreaking or really terrible to not have it. :)

Show
Is the other partner, besides Torchtree, a BUG monster? If not, could anyone give another hint please?


Show
Yes it is, I have a feeling you might have figured it out! :)

Unfortunately, I no longer have a copy of RPGMaker VX anymore to make changes.

author=Destroshard
the developer alive on here still? ran into an issue with the game. all of the sound in it doesn't work when running the game. but i can open the audio folder and play the songs thelmselves. not sure whats causing that. noticed also all the Midi formatted files cannot be converted to anything else like m4a or Ogg it says error and something is wrong. i thought if it could be made into m4a that maybe they would work but can't even do it. so i wanted to mention it to the owner if they are around. game is enjoyable aside from no sound at all.

Hi there. I am actually not entirely sure what could cause the no sound thing. Maybe check to make sure you didn't disable sounds somehow for the application?