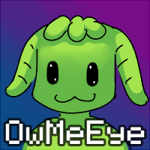 I felt like starting something completely new so, this year I'm learning to voice act a bit, gaining a pretty-sounding voice, and speaking to the crowds, so, follow me on my twitter and youtube

I also played with wolf rpg editor, flash, html5, unity... a little bit.
Haha, I also know some ruby and javascript and some other languages...
I can also draw, I mainly use sai and photoshop, but also used gimp and inkscape, inkscape is pretty cool for vector art. Pixelart is cool but it takes too much time to draw. If I know you, I might share one thing or another, but I probably won't.
I know how to use blender, a bit, I like blender, but my pc doesn't like it, cause it's an old pc.
I mostly try to use open source and free stuff.
I can make music, I'm ok at it, but I'm no pro.
I can also write stories, but I'm not good at writing long stories.

I'm pretty good at some of the above, and so-so at the rest. I also used to visit renpy forums a lot (also know some python), but under a different nickname. I can do many things, but that is a story for another time and another place.