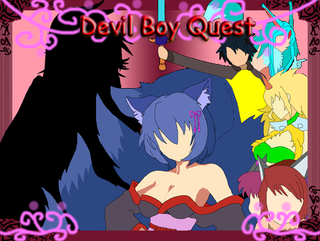 In a world, where monsters take the forms, one boy is fated to change everything forever.

About graphics...
To be honest this is remake game, this game was once released in 2010 used RM2K3 engine(You may notice some characters looks similar to RM2K or RM2K3 like Cecila, Mai, Mira, Rose, etc.) but didn't get any attention because it made in Indonesian Language, the first artist is missing for whatever the reason and so there won't be fixed image tough I hope the first artist would come back but I dunno where is he... it's have been years anyway and some art is also missing along with him like Sphinx Monster Form, Inu Gaol and many more, (Story have been changed because of that like if Lexar answer Sphinx wrong she will turn into monster and trigger Boss Battle but the art is gone so that's scene deleted).

About map...
The map is tricky, you may think you have seen all but you're not like there secret caves in Arya Desert where you think it just blank space, tough you may need key item to reveal it, and there hidden map in Kakao Desert, you may just skip it too, and Maduin city isn't that big if you know Karin secret ability Dragon Jump that allow her to move the whole party to some spot in that city. (I'm sure she already tell you that in when the first time you meet her, the problem is can you find the Jump Spot? every city has at least one, expect Zukaru and Maduin, Maduin has three Jump spot to make you easier to move)

Note: Don't get fooled by maps that looks simple, usually they hide something behind it but usually people think they're doesn't important, tough there Ultimate Present hide there that can be used to unlock certain Girl Skill.


Character... There 11 Character 2 of them can be only seen in full.
Note every character will show their true color after 20 level or above, for now they just pretend that Lexar is the strongest, beside not only Dauna, there other two girl who have crazy power too.
soon I'll make a page about charcater.

About Mp recover there lot's skill can be used to recover Mp(Tough Karen already have it in early game and after her is Lexar, and then Rira) but it will be in late game since you may need to use Lot's Mp to fight, at early game you can just kill them with 1 or 2 hit's so why bother use Mp?
(Mira and Sphinx too but later since their magic will be pretty troublesome for enemies)

Just a hint...
When you got the choices... chose wisely, that's true some of it doesn't affect right after it, but it will affect in late game since it was counted.
EX:If you keep chose brave words such as I'm the strongest etc you may fight 5 Boss at a time while if you act not so brave you might fight 3 and if you act like coward you will fight only 1 boss in late of game, but it also affect your reward etc.

All Bosses in this Demo is pretty easy most of them just need to hit 'em until their Hp low and finish them with Limit Break but I dunno which the last boss you mean because the last boss of Demo is Sylph and she is so damn weak, why? because you just need to hit her once with physical attack, even Otama with her harp is more than enough to defeat her alone in 2 or 3 turn/J. Expect you have been fooled by Sylph and she make you think that she immune to your magic attack, she can avoid your physical attack, and attack you like a deadly machine with her "Shamshir" Create wave of wind to slice you and deal magic damage wind based, 5x hits, if that's true then she manage to fool you.
Don't forget not only maps even battle too is a tricky.

Bond with Girl, There Special Side Quest you need to gain special items for present but the problem is that shouldn't in Demo, why? because you may need to go to Zukaru first and done some Quest etc, anyway you can't Bond with girl for a while in a Demo. (This System is very dangerous because they will learn their Fusion Skill which has lot's effects, and Ultimate Skill similar to their Limit Break Skill if you give them special present you got from special quest that you get after their bond above 500/1000. that's why for now present are disabled, I mean you can kill boss in 2 turn with this and that will be boring right?)

Hendro? some of his event page are missing, seems translator accidentally delete it because there missing textbox and near that box there supposed to be self switch, anyway it will be fixed.

Cute Girl say Lot's Potion need to brew is a Side Quest that will be available after you defeat a certain boss in game.

Dauna left the party after you finish the Desert and she said that she'll return when the party reach the Pyramid, Note that she come late after Sphinx join you, try search her at outside of Pyramid you may find her, She hide from you, y'know.

Collision error in Dungeon Nana Farea, That dungeon is still WIP(You even can see the wall that supposed to be blank) that time, no wonder it is has error or something like that, anyway will be fixed. To clear that dungeon rec.Lv 30 above, else the guardian will kick you out by force, that's why I didn't pay much attention at that dungeon that time since in the demo won't reach that level, or maybe there someone crazy enough to level up to 30 by defeat small fry may take damn long time.

All of world map areas are still in Indonesian, this part is scripting part, the bad part is the one who edit script is not translator.

This game first made in Indonesia and then some people from Japan join the party, the first translator is dead and now his sister are the one who take the his place, I even don't know he has sister and it's seems she isn't reliable too...
the reason it's look like Translated to Japanese from Alpha to Beta because I ask him and now her to translate the World Map and Stuff related to script but she make fatal error in database(When you change the text you have to change the chace name, define pos_x,pos_y, etc and she just change the name without change the other variable and so this happen), so the translated database in Alpha are gone, that's why it return to raw, because she couldn't translate it.

The last word I hire another translator to take care her mistakes, and this may take a while to complete, why let her take the job? because I have paid, yet even she suck at some point she still can translate small stuff like simple dialogue text etc(anything that not very important), so the guy I just hire would just recheck and translate the thing that hasn't.

Anyway thank you for you review it's help us a lot in improving and it's very appreciated.

Just opinion... Should all names to be translated? like Takoyaki are Squid Ball, セメディ are Semede/Semedi or Meditate in English, Mode KZL refer to Banzai Mode, wait what Banzai mean in English anyway... not all names and words can be translated to English, well I don't really care I'll leave it to those two, the next demo will be full translated, if there a words/names didn't translated that mean it is can't be translated, maybe they will leave note or something, when the next demo? after the full game translated and that may be a long time.

04/23/2018 07:19 AM
I can give tons of reason, but let's us skip that and say Alpha Save should be deleted and you have to start a new in Beta, sorry about that I'm myself found lot's bug if Alpha Save used for Beta there will be fatal error in battle in opening menu and many more, I don't want to bore you with that so...
Just start a new game in Beta version.
Try to hire Dauna if you want to progress the game a bit faster.
(She inside a cave in a Mountain Rock, and you need Mantep Potion x1 for her)

Note: I'm not master of program so I dunno how to convert the save file or something like that, so that is not possible for alpha save used for beta.

If you have another problem with the game let me know.
~Perang Cemen

04/22/2018 01:10 PM
Did you use older version? that problem of yours seems you either play older version of the game or used old save file data or something like that, I have check them and nothing seems wrong in BETA, but I very sure it was problem of ALPHA version, if you didn't meet with Dauna in Mizu then you use ALPHA version which has some bugs.

Anyway let me know what version you use, if you use BETA then I'll check it again else I suggest you to download the BETA version.

And thanks for telling me this, I really appreciate it.
~Perang Cemen

01/09/2018 10:22 PM
Name: Perang Cemen Devil Boy Quest
Link: https://rpgmaker.net/games/10194/
Status: Demo (15%)
Genre: Fantasy Rpg with some sci-fi
Estimated length: 8 hour
Small description: In a world, where monsters take many forms, one boy is fated to change everything forever.
Special requests: Please try to reach end of demo, but you don't have to if you don't feel like it, if you stuck but you want to reach end of demo just PM me. (probably there two boss battle is kinda tricky)

What do you hate most about game design

Btw does marketing is also part of game design? I mean I couldn't play a game in a market do I?

01/07/2018 09:01 PM
Doing some event stuff that have been planned for 3 years, create some extra animations for extra skills, create long textbox filled with text that may confuse the player, and update some faceset.
Show

Not only face set there lot's Graphic I update to give player more feel and looks or whatever they call it.

What next? probably fill enemy database and troops and stuff like that.
really-really pain in my neck but whatever this is my life after all.