Close
Writer, programmer, and artist with Project BC.

02/17/2016 03:34 PM
I think it's fine to have characters with stereotypical qualities if you have other characters balancing them out, but it's not always easy to have, say, multiple bisexual characters in stories with a small cast. Again, the problem is when the only representative of a group adheres to a stereotype. I think you have a lot more leeway to play with stereotypes when you're not making an implicit statement about an entire group through one character.

That women can be weak and timid and emotional and passive too? Because rewriting every woman to be 'strong' and 'powerful' and emotionless is stupid. Which is why you write a character first.

Well, sure. The problem isn't that female characters can't be weak and timid and emotional; the problem is that if the only female characters in your story are weak and timid and emotional, then you're kind of representing women in general that way. A character can be well written and still support a negative stereotype. That doesn't mean you should never do it, but you should do it because you made a conscious decision to, not because you flipped a coin. In the simple example where you picked a character at random to make female and all other factors are equal, yeah, you should probably either pick someone else or add a second one to balance the meek one out.

Please don't get me wrong; I'm not saying people should scrub everything that could possibly be interpreted as a negative stereotype from their work, because you'll end up with a dull and insipid story if you go too far down that path. I definitely don't think all female characters have to be strong and powerful and emotionless, for example. I'm just saying that if you decide to make the only female character weak and timid, then you should consider whether your reason for doing so outweighs the fact that you're supporting a stereotype.

Here's another example. Say your only bisexual character is promiscuous. Even if it's handled with care and sensitivity inside your story, and even if the character is great and the promiscuity is completely justified it's treated as a positive thing, it's reinforcing a wider cultural idea that bisexuals sleep around a lot. Does that mean you have to change it? Well, not necessarily. But I think it definitely does mean that you should seriously think about why you made the character that way. Even if you decide to leave it in, it'll be more nuanced for the consideration.

But hey, if you're so worried about that, then pick a different character to genderflip. Women come in all shapes and sizes and types - and that's the same of every race, every sexuality, every gender, etc.

Granted, if the only female characters you have in the game are Rosa (FF4) then you have an issue, but I'm sure you're not just writing every male character to be a Rosa, now, are you? So your gender-flipping should be fine... unless they are, in which case, you have a lot more problems with writing characters in general. Maybe you should be thinking of doing more practice or making a puzzle game or something instead?

Er, is this directed at me personally? For the record, my example was hypothetical. I have no problem writing female characters. I'm a woman, and most of my protagonists are female, and my stories usually have a 50/50 gender split. I also have no problem writing minorities, and I'm not trying to provide people with an excuse not to do likewise. All I'm saying is that it's good to be aware of the cultural context you're writing in so you can avoid unfortunate implications.

02/15/2016 06:02 AM
Right. My point wasn't that you can't include those things but rather that making one of the characters involved a minority recontextualizes them. A lot of the people in this thread seem to be implying that you can just arbitrarily make white male characters female or minority or both and leave everything else exactly the same, but I wanted to caution people to think carefully when you do it. Once you have a minority character, you have to consider whether you're representing them in a positive way and what kind of message you're sending.

When I brought up a man hitting a woman, that wasn't a great example. Let's instead say you have a cast of male protagonists, and you want to include a woman, so you gender-flip one of the men. Unfortunately it's the man who is the most passive and emotional in the party. What are you saying about women if this is the only major female character? There's nothing wrong with writing a passive, emotional woman per se, but you don't want her to be representative of all the women in the story, right?

02/13/2016 07:46 AM
I actually think female characters aren't too bad. On a superficial level, you can write a woman in exactly the same way as a man and be fine 95% of the time. You do need to be careful about stereotypes, but a lot of times people won't really notice. I guess my opinion is that thinking deeply about representation and things like that is important when you're very serious about writing, but even if you're not, you should still give it a shot. I think it's better to make an effort and screw it up than to not try in the first place. I don't mean to discourage people from trying it, just point out that it can be complicated in unexpected ways.

My process is to figure out the characters I need in the story from a high level, then pick gender and race, then go back and make sure I'm not reinforcing bad stereotypes. All characters work basically the same way regardless of skin color or genitals; it's just important to be aware of the cultural context you're writing in and make sure you don't unintentionally say bad things.

02/13/2016 07:15 AM
I agree that erasure of minorities in fiction is a serious problem, and it'd be great if more writers addressed it. But it's kind of disingenuous to say "just swap some genitals/skin tones/whatever and you're good," because it's a lot more complicated than that. It's actually really difficult to completely avoid negative stereotypes. As an example, consider the following scenarios with two characters:

- A is violent towards B.
- A is more proactive than B.
- B is kidnapped and then rescued by A.
- A is smarter and more rational than B.

These are all fine if A and B are both men or both women, but they become problematic if A is a man and B is a woman, because now you're reinforcing negative stereotypes about women. So if you're writing a story with both men and women, and you care about not perpetuating bad cultural ideas about women, there is suddenly a long list of things you cannot do. Same goes for race. If you have a character who gets killed off early in the story, it's problematic if they're the only minority. Or if you have a character who's a thuggish and uneducated drug dealer, you better be very careful about what race you make them. Many things that are fine in the context of a story reinforce bad ideas when viewed in a broader cultural context, and it's important to keep that in mind as you write. Having gone through this experience myself many times, I can see how it's tempting for people to just write white men all the time. White male characters are judged as individuals, but a minority character will always be viewed as a member of their group, and anything they do reflects on other people like them.

As for protagonists, there are some surprising pitfalls when writing about minority groups you don't personally belong to. Specifically, when those groups face difficulties and discrimination, you have the option of either glossing over them or trying to address them, and neither option is great. It's bad to pretend that serious issues don't exist, but it's also extremely hard to write about, say, racism faced by African Americans when you're white and have zero firsthand experience with it. I've been wrestling with this issue lately because the protagonist of the story I'm working on right now is gay (not that you'd know from the first installment), and I'm really not qualified to tackle the issues of gay people. I'll probably end up just not addressing them at all, but I suspect a lot of people will be unhappy with me for that decision.

In conclusion: representing minorities is important, and people should definitely do it, but it's disingenuous to reduce the problem to "just include more women/PoC/LGBT in your work and everything will be great." 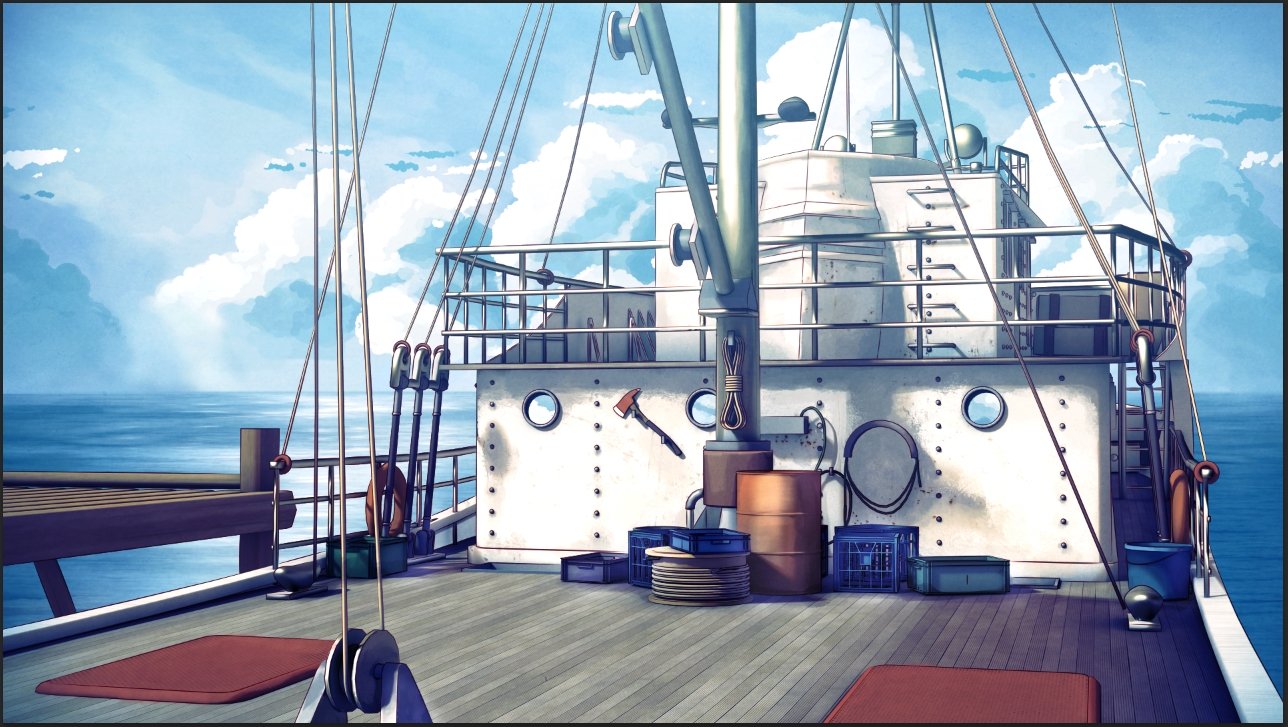 Another one. Shot of the fishing boat. The color grading is different in these two, so maybe I should unify them since they're part of the same scene.