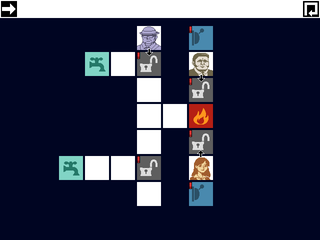 no-one has to die.

Lives are in your hands.

Think Outside the Box Review

09/05/2014 02:38 AM
I'm really glad you enjoyed it! Yeah, it's not as long as I'd like, but it was made with a strict time limit of a month. And you may have noticed I'm no artist :P But it's better to leave someone wanting more, in the grand scheme of things. Thanks for playing!

A lot of people got that out of the ending, and it's definitely one way to read it, but it's not what I was going for really. But take it however you want!

Think Outside the Box Review

07/28/2014 04:22 AM
Thanks for the review! I'm glad you liked it so much! My choices were make more content or actually release something for once :P I agree that it's very short though. Thanks again!

author=argh
I can't get this to work at all. I can see the title screen, but I can't click on anything except the mute button - and when I do, I can't seem to umute it. I also don't seem to be able to "select" the window - after I click on it, the arrow keys still scroll the screen, as if the game window is just being ignored.


Huh, that sucks. There are lots of weird browser issues with Construct 2, I've found :/ That's a common sort of problem, where it can't transition between different layouts(which is why the mute button worked but the others didn't). It's interesting that the window wasn't in focus though.

author=Pokemaniac
One solution is to have battles be asymmetrical; the enemies have all the advantages and special powers, and are stronger than the player, while the player has the advantage of strategic thought, finding counters to each of the powerful forces on the AI's side. Some of the most satisfying enemies are ones who destroy you easily or prove a drain on your resources until you figure out a succinct way to defeat them. Personally, it's a real kick in the guts when the enemy then counters my solution, and can make a game quickly feel unsatisfying. But then again, there is definitely a market for deviously hard games.

I think you'd like Bonfire. I can't believe it took me this long to bring it up, actually, it's a good contributor to any discussion of strategic RPGs.

You weren't wrong! I love how they've refined every character down to their 3 most salient qualities. It's something I actually considered recently, and I'm glad it seems to work :P

07/21/2014 09:46 AM
I'd argue the biggest strategic gap between a (well-designed) JRPG and Chess would be the number of players. Take Pokemon. In the story mode, it is for the most part about choosing the best Pokemon and choosing the most effective damaging attack. In multiplayer, however, its a game of predicting your opponents move, choosing whether to attack to deal damage, use a status move to hamper your opponent, or to switch- and working out what your opponent is likely to, and playing around that.

Arguably this is a problem that could be overcome by an AI, but it's such a fine balance between an enemy who either acts predictably or totally at random, and one that plays TOO optimally, and makes the game frustrating and thwarts attempts at basic strategy by seeing through them.

One solution is to have battles be asymmetrical; the enemies have all the advantages and special powers, and are stronger than the player, while the player has the advantage of strategic thought, finding counters to each of the powerful forces on the AI's side. Some of the most satisfying enemies are ones who destroy you easily or prove a drain on your resources until you figure out a succinct way to defeat them. Personally, it's a real kick in the guts when the enemy then counters my solution, and can make a game quickly feel unsatisfying. But then again, there is definitely a market for deviously hard games.

Okay imma stop now. I just found the chess analogy to be short-sighted. I agree with your thoughts on random chance, though(mostly; managing random chance can be an extra layer of strategic depth).

06/07/2014 03:10 PM
It'd be kinda neat to keep a dev diary in game some time, with what you were thinking about or what you'd just eaten or what was going terribly wrong each time you worked on the game. It'd be an exercise for both player and developer.

Also I just read through like 10 pages of catmitts posts on RMN and it was a real trip down memory lane. REMIND ME TO PICK UP 50 SHORT GAMES even if I never play them you've earned $5 or whatever for being my gateway into weird short games all those years ago

How do you feel about profanity in RPG Maker games?

06/07/2014 11:51 AM
I used a fair amount of profanity in my last game. To be fair, it was set both in the modern day and in a building on fire, so it seemed natural. Some people don't like it and argue it rarely adds but it adds punch and who swears and who doesn't can say something about your characters.

It's generally easy to find an alternative to swearing, though, I'll admit.

author=CashmereCat
A question: what kind of games are Game Jolt interested in? Are they a big fan of RPGs or adventure games? 2d/3d? What seems to be their buzz?

Since a lot of the major buzz around here seems to be either old school JRPGs or horror exploration games... (maybe because that's the games you can make well using the engine)

There's a pretty wide base of games on GameJolt. They're interested more in small, quirky projects that do something a little different or are offbeat in some way. There's a big call for indie horror games there as well. I think it's really the case that it's the developer's job to make their market, and at least in my experience GameJolt is responsive to many types of content. That's the main place I can think of for RPG Maker games. I can't really make a call on whether there'd be much demand there for more genre-conforming JRPGs. One plus is the RTP doesn't have the same reputation to non-RPG Maker users, or at least not yet.

And either way, it's not costing you anything but a bit of time to put your game up on there and see what happens!

05/14/2014 07:57 AM
Posting on sites other than RMN is really important too. Gamejolt is a great one for noticing games that may go unappreciated here. Post everywhere that you relevantly can.
Pages: first 1234567891011 next last