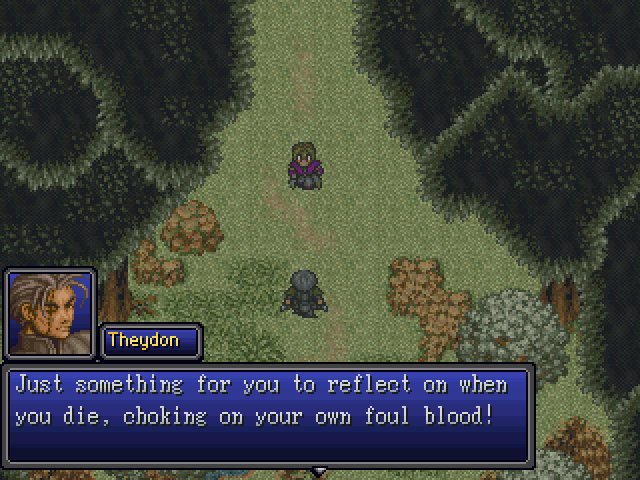 Just a little something from my upcoming project. I'll have the prologue uploaded soon.

01/08/2020 01:15 PM
I appreciate the encouraging words, but this is something I have mulled over. It was too ambitious of a project for me. So I'm pretty set in my decision.

Anyway, so not to derail this thread I do have something that's waiting to be submitted that you could review. It is a lot more polished and is finished. I'm just waiting on a beta tester to help me with some balancing issues.


One thing that I just can't get out of my head upon finishing The Surge 2 is just how disappointing the story was. A lot of people gave The Surge flak but I think it was wonderful, and I really liked the hard sci-fi setting and story (me being a massive sci-fi fan). so obviously when The Surge 2 was released I was excited. The combat is certainly a step up form The Surge with the directional blocking and the energy and health system meaning you only really need to go back to a bonfire if you need to upgrade your gear. But I'm here to whine about the story of The Surge 2.

After the ending of The Surge the rocket from the Creo factory carrying the nanites that will restore the earth's atmosphere but kill off 95% of the population has launched and is now doing it's thing in the atmosphere. Around about this time a mysterious nanite plague known as D-Frag has started spreading. And some religious cult has started worshipping this thing called The Spark. In the midst of all this. A girl called Athena has become something of a vessel for the nanites and can carry out their will (even though in The Surge the nanites were perfectly capable of doing this by themselves as the last boss was a nanite cluster called the Rogue Process.

While all that is going on a member of the Cathedral of the Spark wants the power for the nanites for himself so he can 'reshape the world' and takes the power of The Spark battle Athena and transform himself into something resembling a Kingdom Hearts boss.

Now, my main gripe with the story is the fact that the first game was hard sci-fi, and it was great. And then The Surge 2 decided to go for a really generic and almost cliche story of one dude wanting to destroy the world thinking he's the only one to handle an unknown power. Which, if it was that by itself would have been ok if not for the fact that there was a prefectly good continuation of the hard sci-fi buried in the story; the D-frag virus, Athena, who the main character is and why we survived the events of the introduction. The massive nanite structure that hovers over the game world. We have the key ingredients to make a really good story. Maybe I'm just biased because I don't think religious cults and hard sci-fi go well together. Imagine how less of an impact 2001: A Space Odyssey would have made if during the chapter where Frank Poole and Dave Bowman are in the discovery one and intercut were scenes of people on earth worshipping the monolith. It would have come across as silly. Or Imagine if the religious aspect in Do Androids Dream of Electric Sheep wormed its way into Blade Runner it just wouldn't have meshed with the film at all.

What are your thoughts on The Surge 2? I know it's not the greatest release of late 2019. But maybe I'm just wrong and need to shut up.

11/13/2019 12:43 PM
I bought myself a new gaming rig, and with it I got a free copy of Call of Duty: Modern Warfare. I don't normally play the cod games, they're not my thing. but if it's free I'll give it a bash. and all I can say is if I'd paid full price for it I would have been sorely disappointed. But on the subject of shooters I've been working my way through Crysis again. I forgot A: How good that game is, and B: How it holds up graphically even today. It's still an absolutely gorgeous game to look at.

Now that I've finished Code Vein I'm running out of souls-likes to play, so I decided to give Remnant: From the Ashes another go. I'm enjoying it more so than my first time round. I'm actually finding the combat oddly satisfying. The gun sounds have a good punch to them, even the starting pistol. I'm still not too far I've certainly played worse.

Also on souls-likes. I downloaded the boss rush mod for Sekiro: Shadows Die Twice and I'm loving it. The combat in Sekiro is so taut and almost to a certain degree elegant and anytime I just feel like fighting my favourite bosses or mini bosses I can.

author=unity
Still, if you enjoy the soulsborne games and anime aesthetic, I'd reccomned Code Vein.

I really enjoy Dark Souls type games and their ilk. But I am really not enjoying Code Vein as much as everyone else seems to. I mean the combat is fine. It's functional. I don't mind the level design that much nor do I mind the monster design. But there are a number of other things that really stop me from enjoying the game as much as I should.

After fighting I think it was the 3rd or 4th boss(which gave me a hard time) I just wanted to move onto the next area and see what else was in store, but the game had about 4 separate cutscenes before I was handed back control, at which point I stopped caring about the story and now just skip all cutscenes and memories.

The memories. While a nice idea I hate the fact that you're reduced to a slow walk and have nothing to do in the memories except listen to the dialogue. Dark Souls 2 had memories but you were actively involved in them and they were pretty fun.

Speaking of involvement. After beating the Anor Londo boss there was a fight in a cutscene, which would have made a great boss. But instead we had to sit and watch the characters do all their cool things. And that was the point I really stopped caring about Code Vein and I just want to finish it just so that I can say I have.

I'll probably get a lot of flak for not liking Dark Souls With Tits. But as someone who lives for the next Souls-like game Code Vein has left me very disappointed so far.

09/13/2019 03:29 PM
Picked up Blasphemous the day it came out. So far I'm loving it. It's a 2D metroid vania that takes certain pointers from Dark Souls with very strong Diablo vibes. Kind of waiting for the difficulty to ramp up as so far I'm not having too much trouble with it with my only deaths coming from trying to navigate stairs and thinking spikes would not be an instant death.

After thoroughly enjoying Fire Emblem Warriors I went ahead and bought Hyrule Warriors on switch, and I'm enjoying it. It's a lot slower paced than FE Warriors. And even though I've platinumed it, I also decided to dust off my copy of Bloodborne again after watching the best friends play it. And occasionally I play a bit of Megaman Legends.
Pages: first 1234567891011 next last