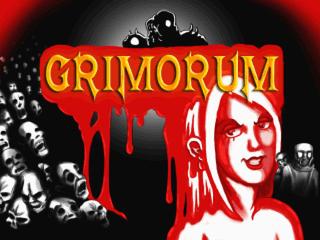 A shooter with a dark and twisted detective/crime story.

author=Cookietherookie
This game was fantastic! I had a blast playing. I'm off to play Wartools next.

I would recommend against a sequel as the story is pretty self contained to me. I would like to see more games in the same style as Grimorum though, that is to say, story driven shooter.


Thanks.
In fact, there was a sequel planed back in 2009 but it got cancelled early on.
It would have focused more on the survivors of part one but I got your point.
Maybe I'll translate another of my games if rpgmaker.net survives that is.

Back in the day people tended to overlook it's problems due to the emotional story. Actually it earned a lot of praise (at least in Germany lol).

Looking back, I should a have reworked not only it's gunplay but also it's progression. More missions in the field while having smaller story segments as flashbacks in between.

I've been thinking about translating Gods of Ashes a lot. Let's see what time brings...

author=IndependentArt
added to my playlist. :)


You know that there is a German version as well? ;)

author=TheRpgmakerAddict
Hey you did a great job anyway. Story parts were perfect, and I liked the art style (recent rpgmaker versions have that silly super-deformed charas and too clean scenarios). But yes, Rpgmaker is not well suited for some game styles (other games I played had poorer stealth sections, but usually these were just diversions), but it has a special place for me.


Thanks.
You mean the RmMV? I dunno. I'm stuck with Rm2k3 when it comes to game making.

04/14/2019 01:05 PM
Thanks for the review dude.
It's true, the rm2k3 wasn't the best engine to choose for the desired gameplay.
It was one reason to deliver a better story and some nicer looking graphics.
I guess I'll go with Game Maker next time.

05/06/2018 08:52 PM
I enjoyed the Death Wish movies a lot (even tough all the sequels to the first part were just rehashed, violent shit but at least very entertaining one). I'm a huge Bronson fan indeed so this was a "must-play" for me.

I got to admit the idea to convert these movies into an rpg is pretty cool. Sadly there is no real depth whatsoever. You included a lot of cool quotes from Kersey, which I liked but you could have made up a few own ones too.

@Shayoko:
The Super Columbine Massacre came up to my mind too while playing which was not a bad thing. What bothered me was the lack of gore (the one in the intro doesn't count). The Death Wish movies were extremly violent so why don't include some bloodshed? I hope it's not because you were to lazy to pixel some corpses!

I guess the awsome soundtrack made up for most of my complaints. It's just classic!
After all one could say that it's a conversation which doesn't try to be much more than that. Still if you liked Death Wish, you should check this one out! ;)

04/21/2018 11:56 PM
Thanks a lot for reviewing my game. Great article by the way. I had a good laugh about myself at some points because I can very well understand how your experience must have been.

I heard about Heavy Rain much later but I was heavily inspirated by the Dooms Series by Mr.Big T.

Well, if you think the cutcenes are long, you should've seen the original version. The whole WW2 scene was one giant cutscene until I decided to change it for good. But your complaints are very fittingly. I believe a good story is important but shouldn't stand in the players way. I'm still working on a way around that for further projects.
The cutscene with the two witnesses is actually just to relate to another game of mine. Back in 2009 I was working on another titel, which I paused for the original of Grimorum. The two brothers are the main protagonists of that one. I wanted to create one big universe consisting of three games and they exist. One is a demo and the other one is untranslated but hey, they exist.

Don't get me started about the engine. It wasn't meant to be but it still happened. I would rather used GameMaker but the self build engine was just not ready. So I tried my best with the rm2k3, even though it's quite unfitting for games like that.

There was a trigger warning, right at the beginning. I just tried to be a little creative with that one. Anyway, great review.

There are still a lot of ideas left for a sequel but only on another engine.
GameMaker perhaps. Let's see what the future brings. ;)