Close
The name's RitoJS.
Regular player and J-RPG lover/maker who can't live without ice tea.
I like cute things and i'm a big Falcom fan. 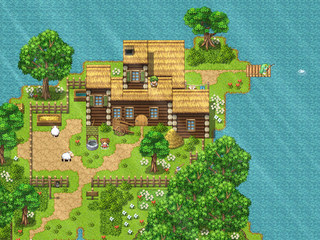 It's about time I use my abilities to its prime...

author=Frogge
Very small nitpick, but I'm not a huge fan of the light from the window shining down on the floor like that, but maybe blurring it a little bit might fix the issue.

Otherwise this looks so cozy. I want this house. How get.


Yes, I'll remove it in the next update.
Thanks !

author=boos405
I just really love how your game project is going so far. The visuals are amazing, and it just looks like it'll be very successful. Keep taking your time, as it looks worth the patients and effort you put into it.

My only thoughts are, I haven't seen much about the story itself. I know it's about a girl who lost her memorises, and if I understood right she had a previous life too.

Is it alright if you let me know some more details about the story without spoiling much? You may have already mentioned them elsewhere and I just haven't noticed, but I'm more interested about it. I may be able to share some opinions.

You can private message me if you like. I may be able to help, but I'm happy to keep everything coincidental.

Best of luck with Paradise Lost, it's looking really good so far!


Thanks !
Yeah, I need time alright x)
As for the story, I'm afraid I can't say much more...All I can say is there is some twists that'll change purpose of the story and if you're thinking that the story focus on the heroine memories then...You're half-right. :p

11/12/2018 08:28 PM
Woo !
Not only you gave me valuable feedback (and help) but even a review !
Thanks a lot !
As for the beginning of chapter 1, yes I'll look more into it I was used to play games with long scene like trails in the sky or thing but since it has been pointed multiple times, I guess I really got carried xD

author=jaydee15
Is your game going to include a World Map travel system?

Yes they use trains, I'm also considering travel system "on foot" (for side stuff)but first I'm focusing on finish the game with the initial plan.

author=boos405
Very pretty graphics, love the looks of all your mapping in those screenshots!

author=kennsure
"Paradise Lost" is an actual name of the place? Now I feel unobservant for not knowing it sooner.

However, that makes the naming a little bit awkward regardless of John Milton reference.

Really ?
I find it appropriate because the whole plot (and I'm tempted to say "everything") is related/centered to that place.

I personally think "Lost Paradise" sounds better, but that's a matter of preference without seeing the name in full context I think.

By the way, I'm playing through the first dungeon and enjoying it so far!

Ah I see, well to be honest that was the prototype name.
But just like you said, with the full context (more than Milton reference) I decided to change it to the actual name.
Glad you enjoy the demo, don't hesistate to leave a feedback after !

author=kennsure
"Paradise Lost" is an actual name of the place? Now I feel unobservant for not knowing it sooner.

However, that makes the naming a little bit awkward regardless of John Milton reference.


Really ?
I find it appropriate because the whole plot (and I'm tempted to say "everything") is related/centered to that place.

author=sedenha
Congratulations. I've played the entire game so far, and I'm already anxious to the next chapter!
I found only a few bugs and one or two grammar errors, but the game is being amazing. Nice spells, great combos. You become used to the characters.
The story is great, it's funny and I like the way the characters envolve.
The boss battles were very nice, they are challenging if you don't know how to use the abilities of your characters.
The city is huge! I lost myself when I entered in it, haha!

Hope the best for you!


Thank you !
Could you tell me more about the bugs you encountered and the grammars error ?
And yes, Felancia is biggest city of the game (and also the biggest city I ever made myself). Well, it is the capital after all. Also it'll be like giant hub later in the game so I'm sure you'll get used to it (but I will probably add a teleport system between each district)
Very glad you like the demo !

author=RitoJS
Thanks :D
Although, I was told it was a little too much in term of details.

Actually, i don't think so. This map is BEAUTIFUL, and that's thanks to the details. But that's just my opinion. Anyways, well done!