Close
I am known as Chad on Super Mario Bros. X forums (which is also my real name), and RvBNut91 on YouTube. I am 23 years old and obsessed with video games, the Internet, anime, and cartoons. I also have Aspergers, so I tend to be very awkward and shy, and you probably won't see me around the forums. I'll follow the rules as best as I can and try not to cause you guys any trouble. 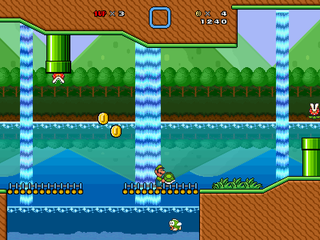 Mario, Luigi, Peach, and Toad must venture across several worlds and gather stars to prepare for the big showdown against Bowser and the Koopalings. Can you collect all 180 stars?

My apologies though, I didn't actually realize there was a World 9. Initially, I never used the warp zones because I didn't know until after I had finished World 8 that you could go back to previous worlds with them. I also didn't use them because I prefer to do things in order anyways, I would unlock them and then not use them. =P I was originally going to point that out as an issue like Ratty524 did, but when I realized that they took you backwards, I decided that was good enough. I didn't expect one to lead me to a new world, however.

I played through World 9 and once again, the length and difficulty of each level is excellent. The scrolling levels are daunting (especially the third level, with the Fire Bros.) and the underwater maze is beautiful. The final castle is also amazing, because it looks like a tattered ruins in an apocalyptic-looking sky. Was that the intention? Impressive attention to detail on all accounts.

I found a couple of issues in that level, though. A couple of the Thwomps aren't noticeable until they're already hitting you due to the upward scrolling nature of those areas, and I dislike how Bowser hits the ceiling and becomes much harder to avoid that way when the arena's already pretty tricky. I wouldn't change my rating because of this, because it's just one level out of the entire game, but excellent work on the world overall.

As for what to put in the sequel... I'd say either make it revolve around a different style like SMW to set it apart from this game a bit more, or come up with some different world themes such as space, industrial/factory, etc. Or both, it's really up to you. Still, I look forward to it, and again I apologize for reviewing this without even knowing that this game had one more world to it.
Pages: 1