Close
Something happened to me last night when I was driving home. I had a couple of miles to go. I looked up and saw a glowing orange object in the sky. It was moving irregularly. Suddenly, there was intense light all around. And when I came to, I was home.

What do you think happened to me? 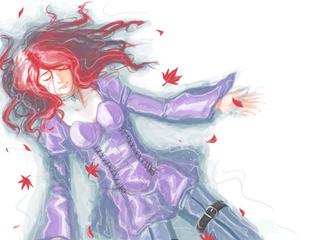 11/15/2017 04:12 PM
I started playing Comrades, the multiplayer DLC for FFXV. It's pretty cool so far, and they've made some much-needed changes to combat. For instance, there are no more items, so there's no more pausing and navigating menus in battle.

For anyone into AI culture, this video is downright fascinating/mildly creepy.

author=Dyhalto
but if we go forward with some dopey situation where billionaires own all the robots and everyone else is reduced to immiseration then, well, that's not good :x

You're unfortunately more right than you probably know.

First and foremost, a review is written for the benefit of the audience and not the creator. Thinking that the criticism within a review isn't valid because it isn't sympathetic towards the creator is remarkably silly.

11/12/2017 01:23 AM
I think a big part of the cultural divide here is that RMN can't/won't firmly to commit to whether it's intended for developers or for players. If it's for developers, then features like reviews and scores serve no purpose but creating drama and cliques. If it's for players, then reviews should be written for outsiders and not rank games by metrics that are only informative to other RM devs (like giving a minimum 3/5 for any game that is complete and doesn't crash).

As a result, I think there has been a long-standing gulf between people who approach the community differently depending on which audience they think it's supposed to serve. Reviews are a good example of that, where the nature of the review you write is going to be completely different depending on who you think the intended audience of the site is supposed to be.

If RMN was really supposed to be primarily geared toward developers, then I'd expect reviews to be replaced by something like "critiques," which are posted addressed to the developer(s) with a list of feedback items. Feedback that would be action items, like "I think the sewer dungeon would be better if it was shorter," or "I think cutscene XYZ should be broken up with some gameplay in the middle." Think like Github issues. It would be about constructive feedback.

The problem with reviews is that they're intended to be informative to would-be players, which isn't necessarily useful to the developer. But when people write reviews that solely address the merits of the game in the context of whether or not it's worth playing (to end users), it can come across as hostile or negative because clearly the creator is going to read it. So as long as that identity crisis is there, I don't see this kind of drama going away.

10/28/2017 03:28 PM
Nearly done with Yakuza 0's main story now. It might be the first game I've ever played where the sidequests are the best part. That's not to knock the main story, either: as goofy as the sidequests are, I was surprised that the main story manages to weave a compelling serious story with engaging emotional stakes. It also has excellent pacing, which is something I'm not used to seeing in game stories.

MAKE GAMES THEN YOU DIE

Does anyone Remember RpgRpgRevolution? (Remembering RRR)

10/20/2017 09:42 PM
I was the moderator of the project forum for a while in its latter years. It was a pretty friendly community, and I met a lot of friends there that I'm still close to years later. Ultimately, it couldn't compete with RMW, which had official Degica staff and support.

There's a disco dancing minigame, and as you rack up points, you charge your "Dance Fever" meter.

This game is pure and beautiful.

Unfortunately, I'm busy crunching for work this year so I won't have the chance to join. Maybe next time.
Pages: first 1234567891011 next last