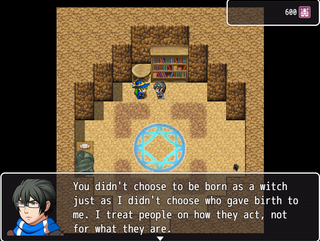 07/27/2016 06:58 PM
I completely understand since coding can be pretty long and tedious; for that I applaud you for taking the time to code evolution for six abilities.

And thanks for clarifying "Scry" since I had no idea that was an actual word until now.

07/27/2016 06:38 PM
It was a pleasure playing this game; giving the first review! (Still shocked that a featured game had no review for years after the game was available for play)

author=Linkis
@SaphireFalcon, I had the same problem with the locked chest.
The developer did that to make us game players feel silly :)
Read the BOLD print at the top of this page, toward the bottom, then kick
yourself for not remembering the answer to locked chest quesion :)

As for the other two problems your having, maybe a bit of grinding would help.
I had the same problem in the beginning.
Remember to use the birds cheep? power to replenish the special powers of your guys.

Thanks for telling me to look for the answer on the game description!

Also I agree with Linkis in that the first two blue trees won't charge the gun; the blue portals at the peak of the mountains needs to be fixed.

Might as well do this as well when you're fixing the bugs...
-Remove the e from Dog skills so it wouldn't say Doge skills (unless it was on purpose to reference something then go ahead and keep it)

07/27/2016 11:44 AM
Can you tell me the answers where Vincent first met Athena and Gary in the Royal Garden? I've already spent nearly 45 minutes trying to figure out the contradictions...

-Enemies tend to dodge often. For instance, a single bat manages to dodge my attacks 5 times...
-Spiders are deadly early on being able to make 2/3 party members fascinated; attack each other
-I've no idea what the answer is to the first question in the cave with the cage; locked chest.

Other than that, it's a fun game so far.

author=Cap_H
Also, who's at the lead for my special award? Corf? Sapphire Dragon seems to be on the lead from a brief look at latest reviews.

This Sapphire Dragon seems like an interesting person... I wonder who that could be? XD

Jokes aside, I only wrote 3 reviews for the third week, so I'm tied with Corf

author=Utopiablue
I know that I have at least resolved the biggest problem you mentioned in the review. I have created a difficulty option in the "Systems" menu that should resolve the high evade and critical issue with the enemies.

Played the game again; I was so happy to see most of my attacks connect now; to not see enemies getting a critical hit so often! Even on Epic difficulty! So I updated the guide accordingly, now to wait for the star rankings to update as well, if not, then I can delete this review; re-submit the new one.

I just realized something upon reading the part where you describe a battle scene.
You never mentioned about using Phoenicia's "Cure" spell to undo the Blind status.
Using that in conjunction with eye drops would help a lot. Blind only affects your ability to hit them when using physical skills or the "Attack" command. So it is handy to have a spell caster in your team since magic spells will not miss.

The reason I didn't used "Cure" whenever my characters get blind because in the beginning of the game, Phoenicia doesn't exactly have a huge mp pool yet (around 135 max mp?); cure was somewhat expensive (35 mp); the fact that I mainly used her healing spell because my characters were constantly at low health because enemies kept getting critical hits on me; I ran out of health potions too because of how often it occurred.

These two above I believe are not very major issues to me. I think it will make the player more cautious about what actions to take, or not take, when they arise.

Alright, the first can be easily solved with tones of antidotes; it's not hard to earn money. But I still don't like the second issue, but that's just me.

The cooldowns for certain skills and spells are in there because I think they would be too overpowered if used all the time. Especially that healing spell.

I'm fine with having cooldowns for powerful skills like healing. What I'm not fine is that the cool down can still carry over to the next battle. But I'm not too bothered by it anymore.

I'm not sure about this one. Unlike spells, physical skills have a chance to miss or critical hit... if that is what you're saying then that should be resolved with the addition of the difficulty adjustment.

Before the update, mortal wound would always hit; instant kill one of my characters. If it didn't, then it would always leave the "Doom" effect that would still instantly kill my character soon after. I'm also glad you fixed this skill since it was so annoying for multiple common enemies to use this skill to wipe my party.