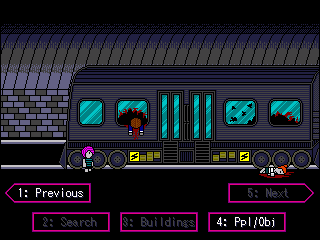 An experimental cyberpunk RPG that takes place in a vibrant, ultra-violent dystopian setting.

06/26/2018 02:00 PM
Yeah, I see the problem. The event is referencing different items than those being displayed. I'm too busy to do anything about it this weekend (plus I won't be at home, so I won't be near my computer), but I can probably get a patch out next weekend.

Thanks for pointing it out :)

Okay, this didn't get done yet because I've also been busy this weekend (it's coming home!) so I'll get around to it when I have a chance.

How does one survive a room filled with electricity run amuck?

I don't think that electricity can be turned off. It's a trap.

Also, is there a bug on the autoclave mission? It's asking me to flip switches, but the lasers aren't coming down.

There isn't a bug with that mission so I'll assume you're having a problem with the "pressure sensitive" switch. In order for it to work, you have to stand still for 10 seconds after activating the switch. After 10 seconds, the game gives you a message saying, "The screen changed to show the lasers had been deactivated". If you move during that time then you have to restart the process.

Context: There is a puzzle in Breath of Fire 3 that you can only complete by standing still until Ryu hits his idle animation, and that shit took me ages to figure out when I was younger. I lifted the concept wholesale because that puzzle always stuck out in my mind.

Also, there's a bug in the synthesis menu, where I have all the ingredients checked off and in my inventory, but the game refuses to synthesize them, saying that I don't have the necessary ingredients and cash.

I wouldn't be surprised if there's a bug. That system was incredibly clunky, and it was one of my first attempts at creating a custom menu. What item are you encountering a bug with?

author=halibabica
Maybe it's been too long since I last saw your work. I always got the impression you were an intelligent member with high standards that avoided sugar-coating things by acid-coating them instead. But changing and growing is what we try to encourage, and I can't deny it's been a while. If you've gotten better about it since, more power to ya.


The moderators made it clear that my work isn't welcome here, but they're too dumb to distinguish the good from the bad so I had to do it for them. I should be thanked, but talent isn't welcome amongst a sea of nepotism...

Alas, that isn't what this topic is about...

If you really think I don't follow the standards I preach then fuck you, I've done enough to demonstrate that I do.

I don't even dislike you, but fuck you if you actually believe that I don't practice what I preach.

totally dumpstering something becomes a legitimate and appropriate tool when there's a particular work that has been getting away with being truly awful, and its deleterious aspects have gone overlooked so need to be dramatically illustrated for the sake of public perception, because the creator(s) are disproportionately self-assured and thereby unreachable

I decide if I think that someone's work has gotten away with being truly awful, and that its deleterious aspects have gone overlooked and thus need to be dramatically illustrated for the sake of public perception, because the creator(s) are disproportionately self-assured and thereby unreachable.

Of course, when I do that better than y'all ever could wish to, I'm censored from doing so.

If you're too dumb to see the sarcasm/irony then fuck you :)

author=LockeZ
Even the best games and the best developers are terrible. Always keep striving to improve, and never fall into the trap of believing you're good enough.

Of course your game fucking sucks. Every game on this website does. If RPG Maker games were any good, then nobody would bother to spend millions of dollars making AAA titles. Don't try to make something good. Just try to make something better than you are now. That's the goal. Improvement. The better you make it, the more people will enjoy it despite the fact that it sucks.

That Lockez was warned for this post is everything wrong with the moderation of this site.

And that's not me debating the merits of what he posted because I couldn't give a shit less whether he's right or wrong; the fact that someone can be warned for stating their opinion is pathetic and the mod responsible should be fucking ashamed of themselves.

First and foremost, a review is written for the benefit of the audience and not the creator. Thinking that the criticism within a review isn't valid because it isn't sympathetic towards the creator is remarkably silly.

The "Is there something wrong with me? Am I just not a good dev?" thread.

If I'd posted there then people would've likely taken my argument and applied it to the specific example that thread is referring to, which I have absolutely no interest in.
Pages: first 1234567891011 next last