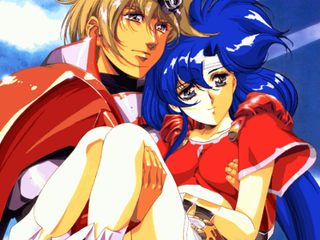 If anything at all, the floor tile stands out too much vs the dark palete crates. Maybe use different crates. Or a more subtle floor.

Credit to NewBlack for helping me with a critical detail. Phenix often changes in and out of the red armor he wears. But since the battle animation comes from the weapon itself, I needed a perpetual check and fix for if Phenix is wearing armor or not. NewBlack helped me with those logistics.

Interweaving of multiple perspectives is my favorite part in storytelling. Have fun with that.

Stuff like... one party is in town, as they enter a building, the camera doesn't follow them. It locks, while the second party walks in and their perspective takes over.

Or making mention of each other in the other's POV. Say, some NPC tells Durane, "Man, the guards are all on edge right now. They're chasing some crazy guy in blue armor."

11/16/2011 08:33 AM
Expect a trailer for the opening up soon. It'll be 4-5 minutes long, and I'm pretty proud of it. Normally, I wouldn't post something like that for fear of spoiling, but whatever. It's the opening, hard to have any spoilers.

11/03/2011 09:27 AM
I'm beginning to post character descriptions for several of the P.O.V.'s. They're taking so long, because I feel the need to write them funny. And anytime I'm in the mood for writing, I prefer to write the next piece of dialogue for the game itself.

I'm also trying to decide what kind of pictures to put with the descriptions.
Pages: first prev 1234 last