I'm Scalytank, a game developer from Hungary. I'm highly skilled procrastinator. I also try and work on some projects in libgdx when I find my inner strength for them :D I also like rpg and tactical games... (I may create one, in the distant future... or not...) 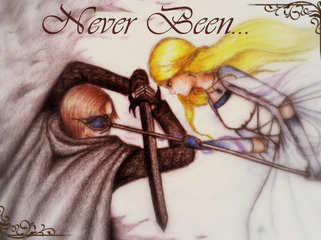 A story based adventure game about a peaceful world and the darkness beyond.

An interesting read I found today. I am a fan of Alan Watts, so I really "like" this kind of philosophy, to read, or discuss.

I would like to hear your opinion about this...

PS: Sorry if this offends any of you, I really don't want to start a flame war over religion.

What makes an ABS good?

I would like to hear some opinions, specifically about Action battle systems. I have recently played a few ABS games on this site, and I feel, that they have a somewhat bad reputation.

Now, talking about ABS in RPG games (Not just RPG maker games, but 2d games made in any engine):
What are some crucial features, you would miss from these games? Or some features you never want to see? What would make an ABS good in your opinion?

Now, I also develop a system like this. The current features include:
- Pixelmovement + pixel based hitboxes (for precision)
- Fully adjustable controls
- Optimised code + pathfinding (Lag rarely occours... I have seen some ABS games here which are unplayable.. And I clearly can't see why)
- More interesting skills (like a simple fireball, which you need to shoot 11 times to kill an enemy. Instead a shadow-ball: for example, which you can charge five times, shoot with the action button, which will damage enemies in a small radius, and when you have more than one charge, you gain shadow resistance... Now this is just an example)

Now I am aware, that these alone won't make a battle system good, but it would be great, to see some opinions about this.
So.. what do you think?

Anyone gets this error?

(sorry if I posted this topic in the wrong section...)

Which style do you prefer

This question will be about my game. I would like to hear some opinions about two styles of gameplay, to help me decide which one to use. The problem is, that i love each style equally.

My main focus in my game, will be the atmosphere, and the storyline, and exploration. I have these ideas, and i think that both can work out good. I really cannot decide this now...

I will talk about the combat system here, and about the movement system also.

1. The first style will utilize pixel-perfect movement, with keyboard. One will move in the game world, like in most rpg maker games, but in a pixel based fashion. I will also utilize real time combat, like Skyrim, sometimes with companions.

2. The other style is however, tile based. This will utilize gridlocked movement, with mouse (Very similar style to Fallout 1,2, Arcanum etc...), and a turn based combat, with action points.

Basically, both styles can be good, i just dont know which one to use. So i would be more than happy, to hear personal opinions about this ^^

What are your System specs?

09/21/2012 08:11 AM
I couldn't find any recent topic about this, so i decided to start one ^^
This information should help people optimize their games, and im also curious :)

09/14/2012 11:32 AM
I am a hungarian game developer from Serbia.
Me, and my girlfriend both work on our projects in ika game engine.
I am a rather experienced scripter in both Python, and Ruby, and i know some pixelart (thus i will make my own sprites for my game also ^^... at least thats the plan)

My current work is my game, Xira, and a full featured editor for ika. I often like to review some games ^^

Why ika?
Its open source, so free, as this editor
Has hardware acceleration, thus blazing performace
Python scripting is considered more faster than rgss (and JIT compiler is present for it)

Me, and my girlfriend both develop our games in the ika engine. We found hard, to map on the default IkaMap editor, (and even in the new iked... it was incomplete... and i didnt have the time, to look into it...), so I decided to write a full featured new editor for our games, in ika itself. This editor is only half complete yet, but I Will definitely finish this.

In its current state of the editor, it supports:
- Unlimited sized maps
- Up to six layers*
- Autotiling
- 320x1920 tileset, with 40x40 tiles, and 8 autotiles per map, stored in Presets (like in rpg maker XP)
- Storing maps in predefined categories
- Pencil tool (capable of holding unlimited tiles, for drawing, like bigger trees), Rectangle tool, and Flood fill.
- Undo function, supporting up to 200 undo's

*(but the default, and the recommended is 3, for performance reasons.. however with todays hardware, i say, that 6 is possible. But then there are low budget laptops, and such... so...)

Future updates:
- A simple database, for editing obstructions, and tile data, and tile animations
- Full featured event editor, so no programming is needed for making games.(But the game scripts can be edited, if the developer knows to script in python)
- Map preview, zooming out, adding ambient colours, to preview how will that look ingame.

Planned features: (these will take place, after releasing the editor)
- A full featured database edit, for items, and enemies (equipment, combat, and statuses)
- the use of multiple Presets for one map
- Performance patches (currently the editor runs at 210 framerate on my 4 year old desktop pc, but i have ideas how to raise this further.)

Some screenshots from the current state of the editor: