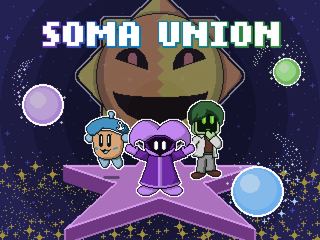 We'll restore our world... together!

What is skill #69 in your database?

Grants the party +15% ATK and MND.
Only one Aura can be active at a time.

Soma Union: A Post-Release Look Back

I'd love to make a not-an-RPG Soma Spirits spinoff or mini side game one day. Just something fun and simple lol. Especially since I don't imagine I'll make a third mainline game: I think I've told the story I want to tell and I'm satisfied with how they work as a duology.

But side games can be a lot of fun.

Soma Union: A Post-Release Look Back

author=Ramshackin
Do you actively reach out to Youtuber's to cover your games, or do they find them organically?

I did a good bit of reaching out early on, particularly with Soma Spirits and Brave Hero Yuusha's commercial versions. I did get a few bites, including the aforementioned StephenGeorg video as well as a few others. Most of the content around the game ended up being organic, including the 3 hour essay and numerous partial playthroughs of Soma Spirits. I'm glad that the games have had enough appeal to have organic content, and it's something I never take for granted lol.

EDIT: I should mention for clarity's sake that these commercial versions has since been converted to free downloads. Once that happened, they started moving a bit more.

For Soma Union, I didn't do quite as much of this since it was such a difficult game to pitch to people, especially with it being a sequel. Probably the biggest marketing push that the game had was being featured on the 2021 Mother Fan Direct, which helped out quite a bit!

author=Darken
Pertaining to the sequel dilemma and without paying much attention: I actually thought this was Soma Spirits being remade. I guess there was a Soma Spirits revise that I mistook it for + similar names, but it does speak to the difficulty of marketing.

I can definitely see how this can be confusing. Actually, one of the reasons I didn't want to call the game "Soma Spirits 2" was because I thought people would feel even more like they had to have played the first game to enjoy the second.

To clear things up about the order of things:

HTML5 link for those who dont want to download a 250MB file (what the heck, RMMZ): https://sgt-m.itch.io/oozies-silver-bells

Gonna start with an old favorite design of mine but with a brand new sprite.

I need oppinions from you all on re-using ideas/map/other things from a cancled game.

12/20/2021 03:53 PM
My most recent project re-used a ton of assets from the canceled project that preceded it, to the point where I can't imagine I'd ever continue the canceled project unless I started it again from scratch. When you're working as a small-scale indie, most people aren't really going to care if you re-use stuff. As any art teacher will tell you: "Every draft thrown into the trash is a step towards a completed work."

Failing that: you can just remember Pokemon has been using the same base Pokemon models and rigging since 2013. The biggest franchise in human history is recycling assets, so you might as well, too.

author=Marrend
If somebody made resources specifically for that game, though, I'd tend to agree with Mirak. Using them in a different game would be using them in bad faith at best.

*Edit: Or, well, I guess you can ask the author of said resources if it's okay to re-use the stuff!

You can usually work something out with the original creator in this scenario. Smaller creators especially tend to be pretty flexible with this kind of thing and want their work to be seen rather than rot in an abandoned project file forever.

Also I made this misao card if anyone wants to check out what I've been up to. 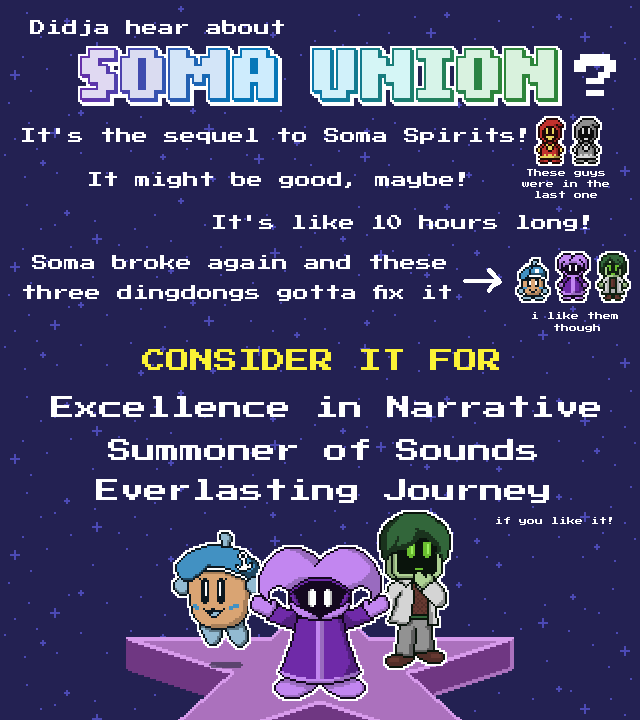 author=ryan7251
also, I'm wondering do you know if this was the last soma game? since I see some planet exploring potential for a third game if there is one :)

Right now, I don't imagine there will be a third Soma Spirits game since I think they work well enough as a duology. At least not a mainline one: I wouldn't be opposed to doing some sort of spin-off or side game sometime down the road, time permitting! But it may be quite a while before that could be a possibility.

I'm glad to hear people enjoy this world enough to want to see more of it though, and it means a lot!

I'll definitely check that missable Power Gem. The puzzle should reset when you go back up to the previous floor, but there could be some intricacy about it that I missed.

I definitely hear you on the Stardust problem. I've gotten quite a few comments that the whole system felt tacked on, and I agree that more could've been done with it. The whole Star Chart system was ported over from my previous cancelled project Crescent Prism, but I probably could have done more to make it more worthwhile. Though I guess it's good that I ended up with something not useful enough rather than something -too- useful and game-breaking, lol. Either way, I'll keep it in mind for future projects.