Close
Ayyyy, wubba lubba dub dub? I love rpgs. Give them all to me. 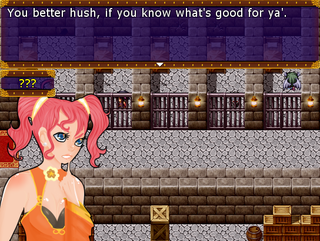 Follow Tobi in this world of hated non-humans and righteous humans.

author=Wyvernjack
Alright. So, I finished (by finished, I mean closed out of) this game. To be honest, it's not entirely good or bad. It's pretty obvious (unless this is some sort of joke game) that this is a first attempt at RPG Maker, so I'll try to keep that in mind when I list my pros/cons below.

Pros/Cons: Really Work on This!
+ Not too bad of a job with the mapping. At least the tile-sets are used correctly! That's always a plus in my book. Unfortunately, it's the only plus...
- Poor writing. I'm not sure if English is your native language, or if you're still in school, but the writing is pretty bad. I'm not just talking about the general story (where little there is), but the actual grammar, spelling, and punctuation is all messed up. If English isn't your native language, then try finding a translator or spellchecker. It'd go a long way helping this game.
- Music... I don't think it really went where it should. I have a bad time remembering the music in most games, but the tunes in this one seemed particularly disappointing and uninteresting. :/
- Character design and effort put into their personalities doesn't even exist. It's like you put 0 effort into how or whom you wanted your characters to be or act like. This, overall, was the most disappointing thing about the entire game. The characters are just bland and boring.
- Cut-scenes... didn't really make a lot of sense. For example, Steve tells the PC that he needs her to do some chores and that he'll leave the chore list on her desk on an entirely other map. Yet, he just vanishes. It doesn't make a lot of sense. This is more than likely just a slight overlook but it's still a good example.
- Lack of a quest-log is a no-no when you give the PC a ton of quests to do right from the beginning. I think I completed 1/4 of the chores, or was it 1/5 of the chores? Either way, add in some way to keep track of those. :P

Don't consider this game entirely bad, though. It does show potential if you just work on the cons, the negative things, of this game. Like I said, it's obviously a first attempt at RPG maker, but it's probably one of the better ones. =)

;~; It is my first RPG game. Thanks for criticizing my game though, I'll do better. I didn't really plan the story-line out either, I guess that's why the characters are so bland.