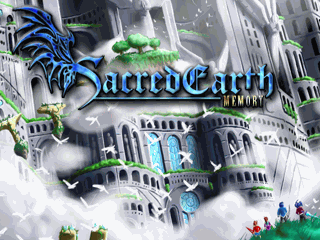 author=Traverse
Well, as someone who was around for SE:B, this already had my interest. But I kinda gotta say, watching that trailer... this kinda seems like a sequel/spinoff to another game I haven't played, especially with that subtitle. What happened in the original Sacred Earth? Do I have to play it first to find out what Garenia is and who the old friend is supposed to be and who the main characters are?

That's the kind of vibe I'm getting. Maybe it's just because I know that SE:M and SE:D and SE:B also exist (and its even older predecessor, SE:Z, which I have never played but remember seeing a video of years back), I dunno. But then again, knowing all of that history also makes me know that there's nothing that comes before it - and yet looking at that Steam page description still gives me the itch that I'm missing something anyway. Could be the lack of character names, perhaps?

The game is standalone. The plot explains everything that it needs to explain regarding the main conflict, and you don't need to play other games to get it. You might be familiar with the characters as they appeared in past SE projects, but SEP kind of serves as a plot reboot to the SEB/SEM projects of 2k3.

And SED is the sequel to SEP. The SED demo is an outdated concept at this point as I'm in the middle of rewriting that game's plot outline.

author=Blind
I think I remember seeing some progress shots on Twitter a while back - honestly, kind of crazy to note how far it’s come from the 2k3 days / the prototype version.

Also, if you made the visuals for this yourself, that’s even more impressive. Kudos on your work ethic for seeing it through to completion!

Hoping this gets some attention after the Steam release.

Yeah, it's been a long time. I kind of miss the simple 2k3 days sometimes to be honest. But well, that was then.

As for the visuals, I made the bulk of the tiles and battle sprites, with contributions from Ocean and another hired hand. Art was done by others.

Thank you. I just want people to play it and have fun, really. The price tag is mostly a necessity of the work put into it.

author=SkiesFortress
I know that at this point in the RM community, I am Literally Who, so I won't say thank you for following me or anything silly like that. But if you happen to read this and find yourself interested, then you have my appreciation just as well.

I still remember you, I think there's a bit of a permanence of visibility when it comes to being around for a long time.

Haha, well that's nice to know. I've not done anything in so, so long, and the community has changed and grown twice over in my absence/silence.

Sometimes, it can be hard to tell.

author=NeverSilent
So the full version of this game is going to be released in exactly one month. Impressive work!

I figured it would be a good idea to try and draw some more attention to your creation, so I featured this trailer on the Game Trailers Playlist of RMN's official YouTube channel. I hope your release day goes well. Best of luck!

Now I just need the game page to be approved before 11:59.

Talk about cutting it close. :D;;

Edit: Or not. It ended! Well crap. Time to throw caution to the wind-

My contribution, if it counts. It's a demo. I'll add it to the game page when it's approved. But for now, here it is.
https://rpgmaker.net/games/10404/