Close
Welcome to the Hurricane. 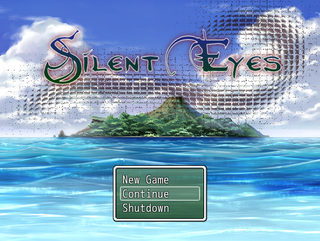 Two siblings crash on an island with one goal in mind... which is soon changed entirely as they fight to stay alive. *A VXA Nugget Crash Course Game*

07/06/2014 09:43 AM
I'm working on the credits event for my latest project and I've run into a little issue - how to stop scrolling text. Anyone know how to do this? I tried the "\|" stop code, but that doesn't work. I'm actually trying to get it to stop at a specific point. Any ideas?

and all its variants for VX to change my font, but all it does is change up the code for the New Game box at the title screen. Is there a way to modify this for VX Ace, or is the fact that I have Yanfly's character box name add-on code installed a problem? If so, is there a workaround?

04/06/2012 04:40 AM
Anyone know of an easy resource gathering tool for RPG Maker 2k3? I've got all my stuff in the RTP and would like to move it into the game folder without doing the painful task of collecting it manually.

RMTool needs not apply - I've tried it and I can't get it to work.

How long will it take if...

07/19/2011 09:04 PM
I'm looking for a pair of free, reliable programs and I can't remember the names of the programs. One program translated RPG Maker 2k3 maps into jpegs, without the lines. Another, while compiling a project, scoured one's computer specifically for pieces of project related to the game being compiled. Does anyone know of these programs or reliable programs that could fit their description?

Also, information leading to a free .exe creator would be appreciated.

(Thanks kentona for helping me realize the redundancy and brainlessness of my last statement...)

04/24/2011 05:02 AM
Check out my website!
It has all my music on it, and a few other things, including links to my fanfics...
I'm still willing to compose music, if needed.
Feel free to comment here or there on my music.

03/10/2011 07:50 PM
Hi. I am Studio Zytharros, a one-man wrecking crew of creativity. Hopefully I can expand this studio into a full fledged company one day, but that's beside the point.
I have been working with RPG Maker 2003 and NoteWorthy Composer (a MIDI music composition program) since 2004 at college. Although a computer crash in 2008 claimed about half of them, I have composed over 400 pieces as practice over that time, with an additional hundred since the crash. I am willing to offer my compositional services to anyone who asks. Check out my website, linked in my profile, for further samples to download. Additional samples will be added to the site at later dates.
I decided to join "rpgmaker.net" because it felt, to me, the best place to get my games out there. So far, though I am new as of 2009, the site as a whole has proven itself capable, if not always stable. Hopefully it remains capable and develops some sense of stability.
Here's to years more of game development!
Pages: 1