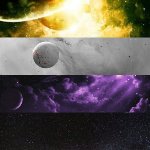 Close
I'm a novelist, poet, and game designer, as well as a huge metalhead, bookworm, and geek. I love story-driven games and the speculative genres. 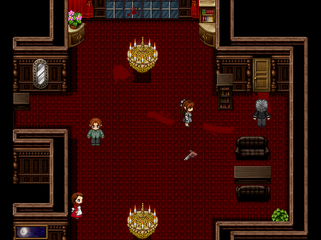 When a party for a wealthy family’s 10 year old daughter ends with the birthday girl dead and her sister missing, the detective isn’t exactly conventional. Short murder mystery adventure.

09/08/2017 01:28 AM
After an admittedly ridiculous amount of delays, demo version 1.1 is now up. This is a minor update with bug fixes. Unfortunately, the crashing bug still exists (at this point, I'm thinking I'm going to have to cut some scripts or enlist some outside help to solve this stubborn issue), but as a temporary measure, saving is enabled in the main menu. Saving often, just in case the crashing bug occurs, is recommended. Sorry about the inconvenience.

The next major update of the demo, containing new content, should be live by the end of the year.

Sorry for the recent radio silence - "real life" has been getting in the way and this project has been unfortunately a bit neglected. I had also hoped to be able to fix the crashing bug before updating the demo, but it's proving difficult to debug because I haven't been able to reliably reproduce it. Nonetheless, the game is very much still alive. I'm planning to finish up and post an extended version of the demo featuring the next town and dungeon soon, and I'm still experimenting with the crashing bug. I'll post some bug fixes later this month whether or not I can get that one solved. If it's still not fixed, I'll temporarily turn on an option to save at any time in the next version so that players can hopefully avoid the loss of significant progress while playing.

@LifeOfCheats Do you mean the crashing bug? Otherwise, I'm not sure which issue you mean. Sorry if you lost progress.

@JEStaff Thanks for writing the review! I should have commented on it a long time ago, but I read it a while back and very much enjoyed your feedback. It's really interesting and useful to see your perspective on the demo.

@JEStaff: Thank you for playing and for the feedback!

Regarding that character observation you mentioned...

Show
Good catch. That's not entirely coincidental. Happy Birthday was finished first, but Glass was actually started first. The original version of Glass was scrapped for a while a couple of years ago, and during that time, I 'remixed' some of my favorite ideas from it for Happy Birthday, as I hadn't planned on continuing Glass at the time. This version is a remake of the original concept. Because of that, though, Glass and Happy Birthday do share some similar themes and characters, although the plot itself, and of course the major twists, are different. In regards to Ervay, he isn't intended to be nearly as cold as the Happy Birthday character you're referring to.


Also, I don't know how I managed to miss that bug you mentioned, but that one should be an easy fix, so I'll try to post an update to the demo over the weekend. Thanks for pointing it out.

@QueenRikku: Thanks - looking forward to hearing your thoughts.

04/07/2017 08:36 PM
Hmm...odd, I'll have to experiment with battles in that area and see if I can reproduce the bug. Thanks for letting me know. And no problem - sorry about the inconvenience.

@Make_it_MagiK Do you remember where you encountered the error? That sounds like something I should look into. Sorry about your lost progress. But to save, you can interact with most beds and select 'Write in Journal'.

04/06/2017 03:27 AM
Thanks! These characters are the 6 main party members. Once met, they will join your group for the long term (although they don't all appear within the scope of the current demo).

02/19/2014 10:28 AM
I haven't been very active here for a while (hopefully that should be changing soon), but thanks a ton for the comments, support, and reviews everyone! It's all really appreciated. It means a lot, despite the recent radio silence.

@JEStaff,
Show
The final piece of evidence was one of the things I was least satisfied with - a bit too on the nose. That's something I want to plan out better if I make another game like this. As far as the killer's sprite goes, yeeaahh, if I'd played The Witch's House first I would've used a different sprite or at least changed the hair color or something :P
Sequel-wise, I actually agree with you. If I make a follow-up it would probably be one in gameplay only - I'd like to improve and add-on to the mechanics of this game, but I don't think these characters have any story left that would have the same level of involvement, so it would feature a different cast and plot all together. I would like to do this at some point, though yeah, right now I'm working on a full-length RPG. Maybe after that one gets a bit farther along.

Anyway, thanks for the feedback!

It's not too likely that Happy Birthday will get any extra endings or major changes at this point (though I do plan on putting up a minor update with some bug-fixes and edited text soon), but I would definitely like to make a less rushed, more fully-fledged sequel with a lot more possible routes and endings included. I'll keep the rest of the feedback in mind for the future, too (I do need to work on making better use of SEs - they were pretty neglected - and CGs would be awesome).

Anyway, glad you liked it for the most part.
Pages: first 1234 next last