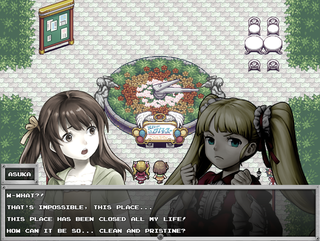 12/17/2017 02:47 PM
Hey, guys, I didn't know where I should post this, so I just posted it here. I have been thinking about this for quite some time and I was wondering if anyone would be interested in this publishing sorta idea I've had in my mind.

Why give you anything, I can just self publish on Steam!

Technically, this is true. But have you looked at Steam's store recently? It's flooded to the point that it's becoming harder and harder to get even small recognition. All your hard work that you've done, can go entirely missed by majority of people. You will also be competing with other RPG Maker games and major AAA releases. You will literally be fighting for table scraps in already limited niche market.

Okay, but why should I care about you?

I have established store presence and followers. I will start to introduce store bundles and deals that will increase your sales alrerady based on the fact that people already own some games I've released. We will both get more sales and benefit from free synergy between stores.

My first game Save Your Mother has been bought in over 63 countries, which is almost every single country Steam sells to. When sold in bundles together without even doing anything, you'll be shown to all the people who bought any of my games and to those who are looking to buy my games. When I market my games, people will also see your games in the bundles. It's a synergy where everyone involved wins.

What if I've already self published my game but I am interested in working with you?

Steam offers way of changing ownership of packages to their devs exactly for situations like these.

What if I choose you as publisher and later on, want to be my own publisher?

Same as before, Steam offers way of changing ownership of packages. I will simply make you the owner of said package, just the same as you would make me the owner. To avoid flip flopping between owners and publishers and make it confusing to keep track of, no publishing deals can be changed before six months has been due. Changes to said deals by either me or you, would require a notification of month prior to it, to allow all paper work and book keeping to be made accurate.

What about Steam Direct fee?

I will pay the Steam Direct fee.

What about other sites, such as GOG, Humblebundle, etc?

I will look to expand my services to these too in the future.

Us little guys have to stick together if we want to survive in the market, this is meant to benefit everyone involved

04/06/2017 11:03 AM
Look, I'm not trying to start any troubles but the fact is, the very same game I've submitted to numerous places with exact same content and descriptions and screenshots has not had a single comment, review or anything in two years of it being here whereareas in every other place it has gotten more engagement. As a developer, it honestly makes me question if it's worth it to keep posting updates and blogs when no one seems to care.

I'm curious if anyone else have had such a lukewarm experience or if I have just been super unlucky.
Pages: 1