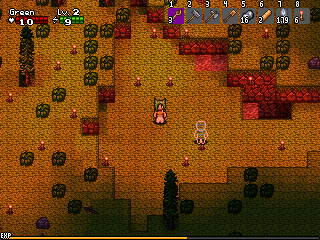 08/28/2011 05:54 AM
Well, it was fun but I've slowly become less active here. I'm going to move all my projects back to Dream.in.code and Meridian Dance, and I'll simply stop posting. Unless this website goes through a giant transition into something good, I simply have no interest anymore at maintaining a presence at RMN.

I've got a tutorial to write, tools, and and engine to work on so I had better get back to work..

08/08/2011 06:14 AM
Somehow, the new Mailbox Message Notifications got stuck and now its permanently reporting one new message and flashing blue. I wish I remembered what I exactly did, but I often right click and open messages in a new tab and answer them that way and then refresh the first tab.

02/14/2011 04:09 PM
I need some test samples that were made in the Japanese version of RPG Maker 2003. I have to try writing a system that supports Japanese text and I need some good solid games to check them out on. Bonus points for games that don't use the built-in battle system (since I haven't implemented that yet).

If you're there Mary4D, it might be a good idea to send me the game that you found this issue out in the first place with.

With people spamming stuff. I wouldn't mind if you deleted the spam and locked the thread (since real people are PMming me for help with that anyway instead) until you fix the bot problem.

I'm putting this picture up here in case anyone wants to do this themselves by hand using this palette I made. It's kind of fun.

I made the actual textures in a few moments just so I'd have some samples to test my HLSL shader and levels with, but the point is with how I hand-drew the normals in.

There's some angles I haven't added to the above palette yet (which would add a normal depth that might be more than you actually need) but this is how I can easily do it. I actually hand-calculated the X, Y, and Z parts of each vector such that it was really normalized (length is as close to 1 as I wanted). The center square is facing directly at you.

The square above it is halfway in between 0 and 45 degrees tilted up, the one below it is tilted down, and so on. Two squares up, down, left and right of the center is 45 degrees, and the ones further than that are tilted even more. This palette was annoying to make since I kept making mathematical mistakes. If your vectors aren't normalized, you'll get much too bright or too dark results on the edges.

I can then have this to draw colors from when I draw the normals on top of the original pixel art. Normal maps should ONLY be used for surfaces that pop out enough to make a clear difference (like bricks and especially emblems). You shouldn't probably do this for grass and fine dirt (but doing this on sand dunes would make for some really sexy sand textures).

In 2D games, you would normal map tiles which make up textured floors, walls, etc. In fact, you'll do this more often since you're creating this isometric illusion of a 3D map constantly with tiles. If only VX was made with a C/C++ DirectX Plugin interface, I would actually spend the time to make a normal mapper for everyone.

Final note, the 4th channel, or alpha in the normal map (not the texture map) would make a surface more flat and shiny (as applied to every smooth, flat pixel to the bricks, and halfway applied to the corners). This could also be any kind of other mask you wanted, like chrome, glowing, or whatever you felt the texture could use in addition to being normal mapped.


PS:
All these purple lit test maps I keep making with the patterns and bricks reminds me of Hydrocity from Sonic the Hedgehog 3.

05/20/2010 01:20 AM
What would be the best non-game breaking way to increase the ATB speed in RPG Maker 2003 so that the bars zoom up until someone has to go? I'm thinking of just having it on wait when someone has to decide something, but the ATB speeds are fast when equally matched to enemies to greatly increase battle speeds.

I keep thinking it would be better if the battles were a tad faster. What I most likely need is a patch that increases the battle step speed in RPG_RT.exe, but if there's some in-engine way to do that it would be better. I *really* don't want to hack it myself as I'll probably break something.

05/04/2010 05:53 PM
I had this moment of insanity where I could apply artificial intelligence and artificial life to a program that could generate an RPG. It would draw the graphics, write the story, compose the music, map the levels and gameflow, create characters/items/equipment. Then you could pretty much play endless series of RPG games.

If anyone has ever played Endless Mario (or gotten to play at all) the idea is the same except the program is aware of you playing and reacts to how you play the game. This program is entirely algorithmic which means once it is written, you just hit play and it makes a game for you to play through. It would adapt to how you play the game and think of new ways to torture you, kind of like Warning Forever.

I really doubt I would write this thing, it's not that I don't know how (I actually know how it could possibly generate relevant graphics and sound) and I do have an extra 64-bit Linux rig just sitting around with gigs of RAM that could be run for the sole purpose of this- it's just that it would be fun to think about the implications of such a thing.

Why? If you think of the rules that makes an RPG a game, you find yourself laying down the bare minimum unifying rules that decide what is actually an RPG and what wouldn't be as this theoretical program (unless someone is sadistic enough to write this) would be bound only by these terms. Anyone writing a GLaRCS would ensure their program follows these rules to avoid games where you start out in a wall, or over a pit for example.

So you have an idea of what I'm asking of you, I'll give some I've thought about:

Generally:
- Any game requires a goal. Endless games still have a goal even though you never reach it.
- Any game also has the terms of failure. You have to be able to lose the game somehow.
- RPGs have character development of some kind, but more importantly they have roles.

Specifically for this program:
- You can't have a map with areas you must go to but cannot reach.
- Game must not have inhuman difficulty. A computer could beat the game but a human must also be able to beat the game.
- The player must know what they are supposed to do.
- The further you go in the game the harder it must get.
- The player can't enter an un-winnable state. (ex: can't kill a specific enemy and thus will die over and over, etc. because the player could burn through their ammo and no way to buy more).

What you look for in a RPG-making language?

04/23/2010 03:14 PM
I'm just putting the finishing touches on a language I quickly invented to do the event scripting in my WeaponBirth engine (it works except for this weird bug when compiling folders of scripts) and I'm kind of wondering...

Modifying/Creating your own engines isn't it- I'm not talking about typical languages for engine development, I'm talking about event scripting. It's the language you define every npc, every quest, and such with.

Often you'll probably write some extra mechanic with the event scripting languages of RPG Maker (when it wasn't really designed for that) which also isn't quite it- but often you'll have events happening at the same time anyway. In games like Oblivion, quests are common events constantly running every so often to check the state of things and see if the quest has updated.

I was writing shaders just for fun and practice, and I came up with this ghost shader. It works by making surfaces that face the camera harder to see and ones that are tilted away visible. This produces an effect that makes the parts of the test model (the model came with the engine) that you're looking directly at invisible.

I'm not sure when I'll ever need to have a ghost but I guess I'll have the shader for it. Linear algebra makes my head hurt.

Oh yeah and if you want it here's the (GPL licensed) code written in HLSL: