Events of the Pandora's Box

author=extrastages
Hello I really want to play this game, but the thing is that the music is not playing, like none of it. The sound is working, but not the music, please respond to this.

You have to download the music separately and put it into a folder called "Music" in the main directory (it cannot be inside any directory inside the Music folder).

08/08/2020 08:57 PM
It's the same trick with dealing with her in the past, actually. If you remember how the fight went with her in a specific past encounter, it's similar to that.

03/29/2020 03:18 AM
There is not. ORIGINALLY there was going to be depending on actions taken throughout the game, but that would've been a massive pain in the butt to code alternate things so it never happened. I am quite curious as to what you think of the game (assuming you've beaten it already).

03/28/2020 03:38 PM
Yeah, I see the Forest orb requires going through the Lake zone at some point. There's 2 different parts of the Lake Zone as well IIRC. The route to that part requires going through the Village Zone's portal to get to that area. Which means you missed a hidden area in the Village Zone. There is one in the Ruins Zone as well, but that requires you to open the pathway, which the switch for THAT requires you to do the one in the Forest. Yeah, lots of going all over the place, hue.

Anywho, yeah, seems you have to go back and revisit places since you are missing a boss somewhere. There's at least one orb in each area of the Void IIRC. There's one in the forest now that you should be able to get to, but that may have to be through another route (sometimes to get to parts of areas, you have to go through other areas).

03/28/2020 02:19 PM
...Which Void? Is it endgame Void? In some places, you HAVE to backtrack in order to find orbs since some will open up the path in previous areas. There might also be hidden paths that you have to find too. Should have fought a couple bosses before them if you haven't already done so. 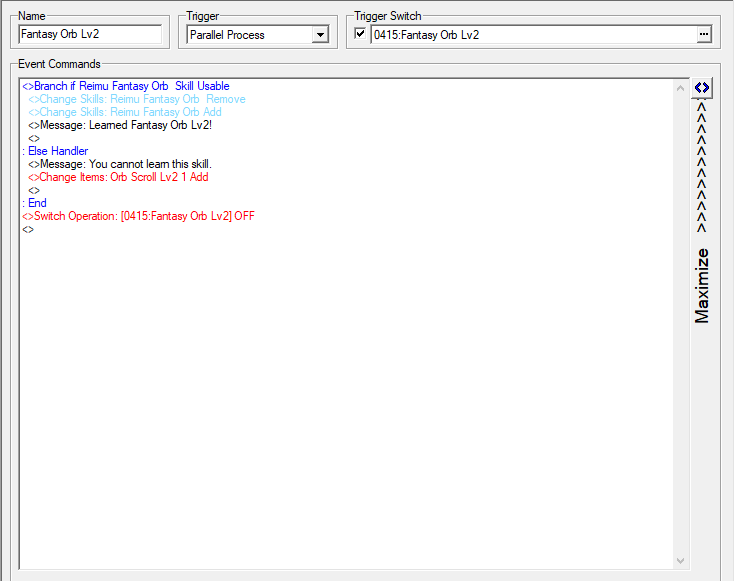 That's basically as simple as that. If you cannot learn the skill, it pops up the message. Otherwise, the skill is learned. Each skillbook is tied to a switch, so using Fantasy Scroll Lv2 would turn on the switch for this common event, check to see if Fantasy Orb Lv1 is learned, and if it is, removes it and gives Reimu the Lv2 variant with the message that she learned it, otherwise gives the message that it cannot be learned yet, then removes the skillbook from the inventory.

In any case, I'm actually here for the very same game! So, I would like to refine at least ONE thing in it: The Ability Learning system. As it is, it's hot garbage and what takes the most time to do. You see, in order to learn abilities in Touhou Fantasy, you have to buy the skillbook from the shop and then use it. However, you have to buy EACH ONE (so need to get Level 2 of a skill before you can use the Level 3 book for that skill. This is to make it so you HAVE to pick and choose which abilities you want at the time, unless you're a madman and grind like hell for everything), and this wouldn't be bad...if all the skillbooks weren't at the bottom of the item list and you have to go into the menu and use each item one at a time.

Now, the question here is: Which would be the ideal method of dealing with this issue? I'm no good with custom menus, so I've no idea how to even do that. I could make a NPC that auto-uses each book, but that'll be hell dealing with the coding just for that (there's 1500 or so common events just for the skillbooks!).

Outside of that, not sure what else I COULD do for the game, unless anyone who's played it has any suggestions?

On a sidenote: Originally, I WAS going to split the game into 2 parts, but since I don't know how well that'd transition from one part to another between games...I opted out of that entirely. Hence, why it's a 70-100+ hour game. ^^;; Anytime I look back at it now, it kinda makes me upset that it wasn't a better game than it turned out to be...T-T

03/26/2020 02:57 PM
The last stone would be at...Fallen Shrine?? Silent Shrine?? I forget which one, but it's probably one of those areas. But yeah, if it's talking about the last stone, already past Ruins of Vina (the game says you have to go there, but will skip the entirety of the dungeon).