Events of the Pandora's Box Still thinking of what to do with the rest of the space. Might be juts more books/boxes lying around or something.

03/20/2014 08:12 AM
Not much I can do about the unused space really. Though the irregular shape, probably so. I wasn't sure on how to go about the shape of the area itself, and didn't just want to go with a flat square or rectangle shape. Hmm...

Ahhh elevation issues. Those are always tricky to deal with. I'll have to deal with those next time I get around to mapping. I'm assuming you're talking about the walls on the right side of the map (since the left side doesn't really have much touching the base floor that doesn't go up to the next floor)?


EDIT - I suppose I could fill in some empty spaces with tables and books on them or something. Hmm...I'll think of something on that front. Does everything else look fine to you at least?

Oh yes, and after defeating the boss, there will be a shortcut in the bottom of the map that'll open up for the player so they don't have to backtrack all the way through (and it'll stay there for the rest of the game).

03/20/2014 05:40 AM
And pretty close to done actually. Can't believe this took the entire day to do but...I think I like how this is turning out! Oh, and the random strewn about bookshelves act as the "treasure chests" of this area, believe it or not.

03/20/2014 12:36 AM
Current layout for the mansion. Main gimmick is A) It's a maze, like originally and B) You have to navigate it not only on ground level, but by climbing around the top of the bookcases. There's two separate tilesets for this map to swap between so that the player can't just walk across the top of bookcases to various areas and vice-versa.

Not sure if this layout is the best way to handle it, and I'm trying to not make the map too big, but be big enough for a dungeon (it's only one screen for the dungeon). Reasons being that not only do you have to go into the center (where the boss is) and then back out, you do this twice in the game (second time with stronger enemies, and the boss is again in the center of the library). Any C&C or advice would be welcomed.


For those curious, here is a reference image from the official fighting game. Obviously, I'm not going 100% with this design but you can get the idea for it:

Original map, for those curious as to how bad it was before: 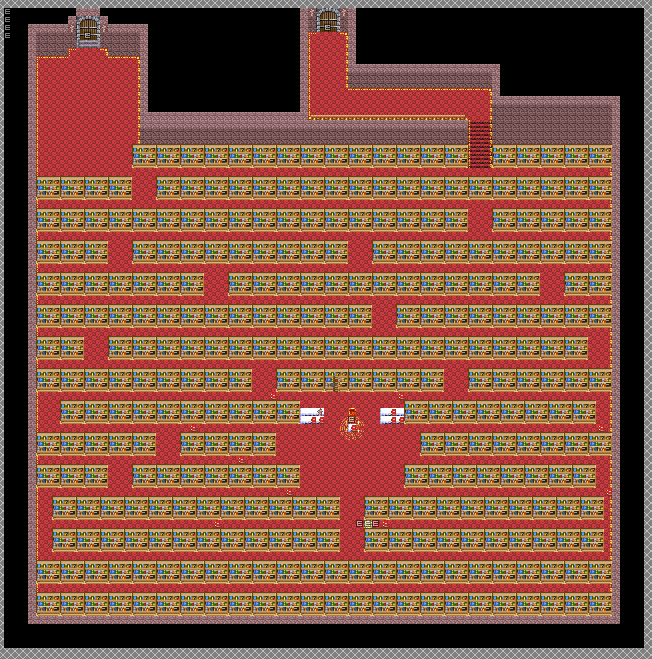 Description of Fate of which I sent to JnXC:

"Well, let's see...for Fate, you know that she's a really short girl (about 4'9" or so. She's shorter than Hope at the very least). She's relatively energetic, down-to-earth, and funloving (she occasionally likes to troll others, but not in a mean way and more in a playful way. She's a very playful person). She's the type that doesn't get angry easily, and it's kinda hard to tell when she's angry to begin with (she generally smiles a lot. You know...that kind of person). She's supposed to be blonde with long hair, either green or blue eyes (I've been undecided on this one the most). She's another mage-type person, but doesn't really have any weapon she keeps around. Despite that, she's an all-around jack-of-all-trades person (she can generally do what any of the other components can, but to a much lesser degree)."


So there you have it, basis behind Fate~

05/03/2013 11:39 PM
OK, bringing this back up again. Probably still going to stick with the "find the 4 switches" gimmmick, but altering how the map looks (obviously). I've already cut the map down from 120x120 to 70x70, which is a good enough size for what I want to do I think. 2 of the switches will be found in this room (one switch is still in the teleporter maze that you don't actually have to into the maze for, and the other switch is still in the circle of chests area, but that will be moved to another room, found on the second floor of a previous area). Only thing I need to decide is how to go about the layout of this room...any ideas?

I'm trying to not go super out there with ideas as Locke suggested (if it were anything not Touhou, I'd probably have gone with those ideas aye, but since this is Touhou and I'm trying to stick to canon as much as possible, those ideas won't work for the most part sadly), so that means I'm stuck using the same ol' cave tileset I've used for the other areas of Blazing Fires of Hell. @_@

EDIT - What I currently have:

It's a start I guess. The wall you see at the top with the 2 arrows was not touched yet from the previous version up above. Just starting at the bottom and working my way up. The pathway on that plateau/cliff at the bottom-right is what will lead to the previous area that houses the talking chests room. Need to decide where in this room I'll be having the second switch...

03/18/2013 06:53 PM
Well, in canon this area (not THIS particular area, this one is a generic cave area) leads to Old Hell (yes, Hell had to relocate to someplace else). So yeah...it's pretty much a generic cave area, though spicing it up a bit wouldn't hurt. Having the same cave tileset here seems a bit blah (the room before this room is a giant lava room for pete's sake).


But yeah, this part of Blazing Fires is kinda bland with its gimmicks, as this is the only area IN this half of Blazing Fires with the gimmicks. I couldn't figure out anything puzzle-wise other than the whole "Which chest is telling the truth!?" thing (yes, the chests talk, but that shouldn't surprise anyone) and "Finding 4 switches" idea. Or bats that will eat people.

03/17/2013 11:40 PM
This is the original map, which is going to be revamped completely. It is currently 120x120 as you can...reason? This encompasses all but one of this area's gimmick (there's a few rooms past this, but they're straightforward and linear, so there's not really much to change aside from reskinning those rooms).

The area with the two circles (save point and shop) in the center is the exit to the area. However, in order to go through here, three other switches MUST be pressed in this area (and the top left area has one switch, which is a teleporter maze...but you don't have to go through any teleporters to get to the switch at all). The bottom right holds treasure chests, which speak of locations of the four switches, but also lies about some as well. One of the switches is found here (the other is found in the upper right in the bone room). The final switch is the exit as well.

The other gimmick is there's constantly bats around in this area that will go after the player and will drain HP upon contact with the player. This can lead to a game over if the player is surrounded by them, so herding them into a corner and passing by them is recommended. Oh yes, there are random encounters here too.


No, I'm not going to split this into multiple rooms. No real reason to do that here. So yes, any ideas on revamping this monster of a beast? I'd like to keep the gimmicks and switches around, though the way this map is currently constructed, it's terribly done. I might have the player traverse multiple floors in this one room for the switches too but not sure yet...
Pages: first 1234 next last