Close
I'm originally from Hungary, but now living in London, UK. I've never finished any games so far, even though I know Maker for 10 years now. I'm doing Mountainbike Downhill in my freetime, and playing League of Legends.

That's about it, really. 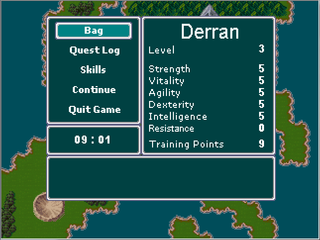 So here's the thing: I wrote a custom menu system a long time ago, but it wasnt really flawless, as sometimes it just "lagged", like, skipped one arrow key, or something like that.
I didn't know what to do, so I changed my 0.1sec wait in the loop for 0.0. Now it's working on my comp, but when I asked a friend to test it, it was lagging on his comp. It applies to the skill select menu as well.

I thought it maybe because I'm loading too much pictures in the same time (I'm writing out stats), but that is not the case, as I checked it, and I only load stat pictures when switching between characters, or opening the menu.

I would include script as well, but since it's quite long.

So I would like to hear some suggestions, that may help, but if nothing works, I'll screen some pictures of the script, as I really want it to be working on every comp.

Thanks in advance,
Zeero

so I was checking through the RMN Store, and I saw many resource packs. My question is, which version of the Maker they are compatible with?

I'm not really sure, but as far as I know Microsoft moved MSN to skype. So I think that in the contact information at the profile, it should say "skype" instead of "msn". I'm not familiar how the merging works, cause I have been using skype instead of msn for a long time now, so I don't know anything about that, but I think adding skype to the contact info would be a good idea.

so I was wondering, is it possible to take out the "quit game" section from the in-built menu system? Because it actually bothers me that it's there, and It messes up the whole picture.

In the whole RM environment I didn't find anything that would take it out, so I guess I would have to take it out some other ways.

Thanks in advance,
Zeero

Finally on the internetz

08/09/2013 12:40 AM
Heya everyone, I just registered to this forum, then immediately got redirected to some guy's post who said I should introduce myself, so here I am (apart form joking, that redirecting thing is a great idea, really).

I'm a 21 years old guy originally from Hungary, but I live in UK for a few months now. I've been working with RPG Maker almost since it was released, started with RPG Maker 2000 10 years ago. Although I never finished any games at all (except for my first game, but I'm sure you don't want to hear about it, I made it with completely leaving out any sort of switches - I didn't understand them.. ), I am now working on a project which could be my biggest throw of all time, that is, IF I finish it.

That's all about me, I guess, in my free time I'm playing computer games (obviously), doing some maker things (obviously), and also I'm doing Mountainbike Downhill (not so obviously).