07/22/2010 01:37 PM
While that's true, I just don't really see a point to having to stop between every couple fights, open the menu, drink some incredibly cheap item to restore life, then closing the menu and continuing on. It could just be done for you in the form of auto-healing after a fight. Final Fantasy XIII did it, and I thought it worked well.

I would, however, have to implement a system where you are encouraged to perform as well as you can, ie, not ending the fight with unconscious allies. In Final Fantasy XIII, it used a score system to determined the quality of the items you found. So, we'll see.

Nothing is set in stone at this point. I've discarded the concept of Constitution because it just felt like a variant of the same HP model. If you get low, you either turn back and go to an Inn (boring) or you just consume an item.

I am considering a system where your stamina doesn't refill or deplete between fights, so if you end a fight with 4 stamina, and use 2 to heal someone outside of combat, you start the next fight with 2 stamina. If you have 0 between a fight then you are forced to drink a potion or quickly heal in the next fight.

post=148406
"Then again, if ATB resets every battle, you run into the problem of battles where players toss out high-end skills like loose change. In addition, what's stopping players from healing themselves to full HP outside of battle? Not MP, because you've discarded it. And if you fully heal after every battle, welp." I know I should have read the latter posts, but this was an impulse... Was Jelanda able to HEAL the party outside of battle, In Valkyrie Profile?

No, she couldn't. I remember having to use Elixirs or do what he said and manipulate the turns in such a way that just before defeating the enemies, Jelanda could cast Heal. Just kind of annoying.

07/21/2010 10:46 PM
Thanks for the comments, guys! I am not sure if this is appropriate to put here, but I've created a mock-up screenshot of the battle system in action. 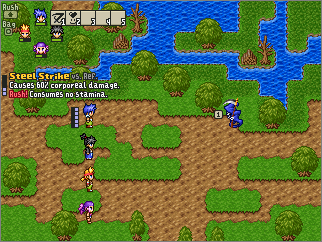 It's not a working demo yet, but this is the gist of the concept. You can simply tap the arrow keys to select a hero, and then a corresponding number to select an ability. Then, simply tap the number or arrow key to target an enemy or ally respectively.

Using this system, it is possible to swiftly switch between active heroes with very little loss of real time. Choosing items is as simple as tapping the 'confirm' (O) key to swap everyone's command tiles to their current grab-bag. The grab-bag is a selection of 4 items in their bags that are ready for combat. Tapping 'confirm' (O) again will swap back.

I will be adding future functionality to access a sub-menu (retry fight or run away) by pressing the 'cancel' (X) key.

Below the four heroes' status panels is the information box. This shows the currently selected ability's details. The black bar to the left (with blue pieces in it) is the required amount of Stamina to perform an attack. Most single-target attacks require 2-3 stamina, while most multi-target attacks require 4-5 stamina.

The last on-screen key listed is the 'shift' key, (labeled Rush) which causes a character to fuel their next attack with adrenaline, or to activate a very powerful Critical Command. This command requires 4 segments of adrenaline.

When do you think is a good time to be able to change your party?

post=147658
A good time to change your party is when the number of people available exceeds the maximum permitted in battle.

That is all. Stick to the basics!

I agree, too. Unless the game has some complex mechanic or another very good reason, I don't see why you couldn't just allow character-switching when there are more people in your party than are allowed in combat.

post=147163
Oh! Now that sounds cool. I love passive abilities, and I don't think they have really been utilized in RM games that I have played *thinks of FF 9 with a certain fondness*.

Thanks! Yes, I loved FF 9, as well! The passive abilities are a little more engaging than the ones found in FF 9, and each one is equal in value, no crystal point system (which I liked, but it's not a good fit for this game.)

I like the idea of switching out abilities and items that are kept in a 'ready to go pouch'. It might make managing characters a bit more engaging that equipping the usual sword and shield. Nifty.

Yeah, I didn't clarify that, but you can swap out any ability or item when you're outside of combat. And I'd like to include a 'Retry' feature like FF 13 did, so that if you are fighting a boss that likes to toss out status effects, you can be sure to ready your status-cure abilities for the next run.

Also, I managed to come up with a good control scheme for a game with this combat system I'm proposing. At first, I thought if all 4 characters are constantly generating ATB (Stamina) and you have to swap back and forth between characters, all in real-time, it might become difficult to control. So I'm currently implementing a system I hope will work...

Thanks again for the feedback!

07/11/2010 07:13 PM
While this game is fantasy, I am removing the concept of "Attack, Magic, Item" and replacing it with abilities with their own Stamina costs. Though modern would be fun :D

Currently, a character can have 4 or 5 abilities equipped at a time and a single Adrenaline ability which is much like a limit break or, more accurately, Super attacks in Street Fighter.

You may also have up to 8 passive abilities that improve the character in some fashion and/or augment one of your equipped abilities.

In addition, each character may have up to 4 items at the ready to use in combat if needed.

I am considering adding a "wait" functionality and that would make it more like Chrono Cross. But the fundamentals would shift from CC at that point, because the actual abilities themselves are so different. I am attempting to create a tactical system where a player must utilize several skills per character to survive a battle.

Good analogy though, for people that are unsure how this would flow! Thanks :)

07/07/2010 04:43 PM
Awesome, I'm glad you like the idea. It does seem like it would be a complicated system from a programming point of view, but hopefully you can streamline some of the mechanics.


Secret of Mana for the font! And I guess one of the FF's, like VI, maybe for the cursor. Not sure about the text boxes though.

This is a neat idea and I wanted to share an idea my brother had a while ago related to this; maybe it will help you!

His thoughts were, the inherent problem with random skill checks is that even if you have a high chance of, let's say, 75%, if you were to fail, you'd be upset. It's even more pronounced when you have something like a 95% chance, and you fail.

Now, using a battle system as an analogy, you don't have something like a 70% chance to win a fight using an Attack skill, you exchange blows back and forth until someone is victorious. You may have a hit chance of 70%, and it's not as big of a deal if you don't hit each round because you just need to win most of the rounds. Take this concept of back-and-forth exchanges and put the skill system into it.

As an example, if you were to try to haggle with a shopkeeper, you would initially select Haggle (and it may still show you a colored panel to give you a rough idea of how difficult it would be to do.) Just like a battle system, you may factor in several skills if you wanted to such as: Charm, Smooth-Talker, Knowledge of Items and Trading (think of a better name lol), and Intimidation.

Now the actual skill check would be a series of events that would either be successful or not. After 6 out of 10 successes, you win. You could even pick what skill you want to use each "round," with some being better choices at different times. If the shopkeeper is getting angry, you could use Charm or Smooth-Talker. If he is starting to break down, you could use Intimidation. If he tries to convince you that his higher price is the actual going price, you can use your Item Knowledge skill to see through his lie.

You could even go as far as giving a character a daily allotment of Hero Points, Action Points, or whatever you want to call them. If you are failing at something that you desperately want to succeed at, you could expend a point to either automatically win a "round" or to increase your overall success rate. This is all pretty unpolished, but I'm just trying to give you food for thought. :)

Another neat part about this system is that you could easily incorporate combat. Let's say you have the Brawling, Pistol, and Telekinesis skills, combat could play out in the same manner, or a similar one, by allowing you to choose what skill you want to handle each round with, and again, special abilities would be done using the same 'Point' fashion.

The way abilities could work is every couple points you learn of a skill, you would gain a new ability. Some examples being:

Charm: Flattering Complement - You deliver kind words, flattering your opponent. Increases your success rate by 50% and decreases the target's hostility toward you.

Fast-Talker: Quick Lie - You conjure up a quick, but very convincing lie, and the opponent believes you. Instantly grants a success.

Brawling: Headlock - You attempt to grab your opponent and put them in a headlock. Not exactly sure what this would do, but it could open all kinds of other possibilities.

post=146596
See, that's the interesting part, not the fact that you're using cooldowns over MP. Should've mentioned it earlier.

Oh ok! Honestly, I thought I would bore you with example skills. Well thats good! But its not cool down based, you can use any ability as long as you have the Stamina.