Close
I am Daigo, located in SanFrancisco. I speak Japanese and a bit of German

My latest game is called Bluebird of Happiness
http://blockbros.net/bluebird/

You can also try Clock of Atonement
http://blockbros.net/tsugunai/ 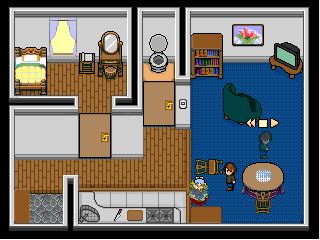 Manipulate time to save a girl

I am Daigo, 11 years anniversary on RMN

I have released two games on RMN so far. These days I am mainly making RPGs running on mobile :)

After I made ClockOfAtonement, a relatively well received RPGMaker2000 game, I learned programming and created game engines and tools by my own.


After that, I worked for game companies such as Activision and SquareEnix. But I realized I love a smaller team, so I moved to mobile game industry.

Last year I got laid off as the game studio was shut down. Now I am back to be an indie game developer again! It seems there is a possibility to make my living creating story based mobile games, so I am interested in keep making them.

Long story short, RPGMaker is the reason why I am into game development and I never regret the choice I made. However, I think the reason why I loved RPGMaker is... not really that I wanted to make games. I think I was more into the storytelling aspect of games. So... I am trying to create games like that after 10 years of absence. I have just released one game and I wish I can keep releasing more games frequently.

Creating games always remind me the feeling of when I was a kid. My passion is still here. I wish everyone here shares the same feeling and will tell great stories.

02/09/2018 02:52 AM
This is Daigo. I made a game called Clock of Atonement before.
I have released a new game, "Bluebird for Happiness".
This game is made by RPGMaker for mobile, which I created by my own!!
Please check it out! :) Download the game here!