Close
Dark Design games is a UK based video game design and developer (Jake Jackson) that aspires young minds and alike from entry-level video game design, as basic as 2D right through to high-end and consumer level 3D game design.

We work on games per request and we also make visits to schools, colleges and institutions across the country to help teach all aspects of game design to those intrested, using packages such as Alice, Granny, GameStudio, FPS Creator, AGS and RPG Maker VX.

One of our most popular and successful projects to date is Mystic Quest Remastered, a re-imagined and completely re-developed edition of the 1992 SQUARE release, Final Fantasy Mystic Quest.

Dark design games is a scam artist hoping to bilk naive kids out of money. 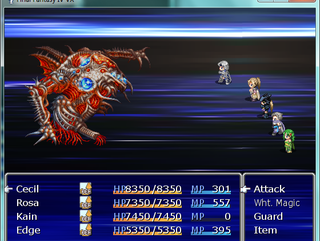 Yet another (faithful) remake of Final Fantasy IV, VX style!


Thanks, btw I am still working on this game, It's just taking much longer than anticipated.

author=Harvest_Cheddar
I'm pretty sure that i'm the only one having this problem but after installing everything and running the game, the Dark Design logo appears and shatters. After that, the screen stays black. I've been waiting for 20 minutes for something to happen, but nothing does.


Its a big bad bug, won't be present in the final version, just press X to skip the movie.

I realize that I haven't been updating the status of the project recently, and for that I apoligize, but I have been increasingly busy with my university studies, which are a top priority for me right now. HOWEVER, I have been working on ffiv when I get the time.

The game is up to the Tower of Zot, after the battle with the Magus Sisters, meaning the game is getting ever so closer to completion. I wont give dates that I promise a release by, so I will just leave at this; when it's done!

Final Fantasy IV VX has now been developed to the point of the Cave of Dark Elf (Troia), meaning the game's progress is near the halfway point! I've fixed so many bugs, graphic and battle updates that the change is quite substantial.

Now that I have my new laptop sorted out and the project moved to it, I can more work again. Regarding the release date of the project, I'm thinking Jan 2013 at the earliest, with a Beta 2 around the end of November.

author=jmjohnson85
Hey thanks for all your hard work DDG! I've been slowly playing my way through MQR while you have been updating it. I just saw that you updated to 1.7 but it looks like your site @ elementsoftware.co.uk is down (temporarily?)

Will you be hosting a download for MQR here on rpgmaker.net? Also are you still working on MQR or is it to be considered a completed project?

Looking forward to your work on this FFIV VX project! FFIV has always been my favorite FF so I'm super excited (looking great so far BTW)!!


NP. MQ Remastered will be available again when the site is back up, which shouldn't be long. The game is 'complete' but updates will be released when need be. I may even update the graphics once I've finished FFIV but only time will tell.

author=lihanliang
sorry out of the topic for some reason Your site on mystic quest remastered can't access why ??? thank you


It's changed servers, it will be up again soon.

Well, since the release of the public demo the game has changed rapidly. There's now the introduction of the no longer flawed ATB system, exactly as it appears in the PSP and DS versions of the game. Whit, Rydia's personal eidolon friend, also is in the game as an extra character when summoned. He has the exact same abilities and appearence as he is seen in the DS version of the game. Summon animations have also been reworked slightly with more frames. Spell animations are nearly complete and have been replicated from the PSP version of the game.

In terms of gameplay completion, the game is currently up to the point after defeating Milon (Or Scarmilogne if you will), when Cecil becomes a Paladin. After much more cleanup and visual tweaks, the game quite possibly will be released again as 'Demo 2' allowing further progression to this point for people who previously played Demo 1.

Thanks to most people's feedback, almost all bugs and regression issues have been removed in the game so far.

I look forward to sharing the next update to FFIV within the coming weeks to you all. Till then :)

author=Seeric
Thanks for the fast reply, it's good to know that you're still working on polishing up the game. Calling it a remake of the PSP version sounds good since that's the version it seems to most closely match, although that still doesn't seem to quite fit, although I'm not sure what would; perhaps "an RPG Maker VX reinterpretation based on the PSP and DS versions"?


Spot on, I guess. What I meant by staying 'faithful' to the FFII USA release was the spell naming conventions i.e Fire1, Meteo, Cure4 etc. But yes other than that this is aimed to be a combination of the DS and PSP release.

In no way is this near what the final version will be like, there's the DS voice acting to come (optional) along with the ATB etc.

Perhaps it would be best for me to call this a 'remake' of the PSP version, BUT, There will also be elements from the DS version including the world map overlays, Whit's story, Whit's minigames and other FMV sequences, so it could also be thought as a 'demake' in both respects.

Once the game is in a state where I deem it finished, It will blow you away, hopefully! XD

author=darkdesigngames
XD cool LP- You had me in fits! :P

That happens :3
But yeah, I'm glad the LT was useful. I have a lot of fun making them!
Now if only I didn't have to recite a famous game to submit my review effectively...

author=sabin1981
That was really fun :D I loved your discovery of the is-hovercraft-but-is-really-a-person glitch, hehe.


Sure was, most of the bugs (especially the hovercraft one) I've fixed. Also, yes the mountain tileset won't look like that in the final game, and all shadow issues have been resolved.
Thanks so much :)
Pages: first 1234567891011 next last