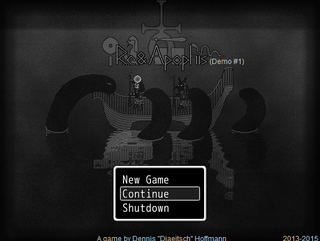 An RPG, which takes place in ancient Egypt.

(I never watched the "Mummy" movies and just googled for the mirror scene.
What a coincidence. xD I took the inspiration for it from Tales of Symphonia btw.^^)

04/17/2017 11:23 AM
Yes, there will.
Besides Crescent and Sunny there are Jack and Christian as well.
Though only three party members at maximum will compete in battle.

04/15/2016 08:07 AM
Thanks for your respond, Dyhalto.
I have found someone who will do the proofreading by now, so it won't be necessary for you to proofread.
Thanks for your offer, though. Especially under the perspective that you absolutely don't want to do it. :)

Has anybody played the game?

author=Dyhalto
Since the beginning of time,
Good has clashed with Evil.

In order to rise again as the mighty sun itself,
Re must undertake a dangerous quest; an ordeal
through the Duat which lasts 12 hours.

In the 7th hour, Chaos incarnate itself appears.
The great serpent known as Apophis
attempts to thwart Re's objective.

Since the beginning of time,
Apophis gets decapitated every night.

Since the beginning of time,
Apophis reincarnates and tries again.

But one day, Apophis broke this eternal loop
and went to Earth, to spread chaos aground.

Thanks! I was always confused by the "land went" line, but my proofreader said it was alright. "And" does make more sense, though.

author=Dyhalto
The game could use a failsafe system for providing players with puzzle hints. Remember in Metal Gear Solid how the Colonel would say during the Psycho Mantis fight "Snake, plug Controller 1 into Controller port 2" after dying like 30 fucking times? I know this from experience ._. In rooms that have hidden switches for example, count the number of times the player enters/exits the room and have a 'D' prompt appear where someone suggests "Let's try checking the walls".

I will think about it. I first thought about to set a timer for about 15 seconds or so.

author=Dyhalto
I forgot a nitpick : Seth's Super says "Seth won't be under control anymore" implying that he'll be in a Berserk-state, but he is controllable and even has new skills.

Oh, that is a leftover from the first demo, where Seth was indeed not controllable after usage of this skill.
Pages: first 12345678 next last