07/03/2022 03:24 PM
I made a boss with only simple commands and attributes. The only thing I added was 150% weakness to water and collapse effect - boss
He has one magic attack; Fire Breath.
For some reason, the first round of attacks shows a message on the screen "Death" It does not happen during any other turns in the battle.
Yet, nobody dies or is even in jeopardy of dying. Nobody in the game has any death spells, either.
Does anyone know what could be causing this? Thanks

05/28/2022 11:40 PM
I have been adding scripts recently and all has gone well until now. I added the Yanfly Battle Engine and all seems to working as it should until I try to engage in a player touch Battle Processing event. Random encounters work perfectly, however. When I engage in Battle Processing, the screen goes black and I get the following error:

I know scripts are made up of lines but, if there is something simple I could do to fix this, I would do it. Otherwise, I will just do without the script all together. I don't want to be a bother to anyone.

The line that says Introduction is Line 60. So, the line that is a string of equal signs and hyphens is Line 61.

This is the working link to the entire script.
https://github.com/Archeia/YEARepo/blob/master/Ace_Battle_Engine.rb

05/05/2022 02:45 PM
I may not be wording this properly and could find nothing online. I want the party to happen upon an actor and an enemy fighting. Talk to the actor and he joins the party and we fight the enemy together after which, the actor joins the party. Thanks

04/18/2022 12:33 AM
My game starts with 3 cutscenes and then the player is controllable. I then, go to a town for some items, go through a cave and into another town. As soon as I enter the town, one of the previous cutscene events starts. There is nothing on that tile. I even moved the town a bit, Then I put a player touch event on the same position tile . It still does the same thing. I even went so far as to set up a player touch event to turn off all previous switches in the game. Still!! I have no scripts in this game, as yet. This game has been working fine up until now.

[RMVX ACE] Permission for a tutorial?

03/12/2022 11:02 AM
So many times, I have seen game makers (especially, new makers) asking how do I "Slide a bookcase to reveal a secret passage"? Even tutorials will tell you how to set the event up but, they never tell you where they got the bookcase that they used in the graphic box!
I would like to make a tutorial how to do just that (Gimp). I'm just unsure if it would be allowed as it may be considered a Gimp tutorial rather than a game tutorial. It's quite a bit of work so, I'd rather know now. Thanks

03/07/2022 11:09 PM
I am making 10-12 !$ character blocks for those who need or want two-tile high images for pushing,pulling or for puzzles. I learned enough on Gimp to make these after seeing so many people asking how to push a bookcase to reveal a hidden door. Even the tutorials mention nothing about how to create the bookcase.
My question is how do I put them on a Resources page. Do the blocks contain their own info to just copy/paste?
Thank you, as always.

[RMVX ACE] How to properly isolate an Image from tileset.

02/28/2022 10:37 PM
This may not be the place for this. If not, I apologize.
This is what I did:
I exported a tileset to my pc. Then, I took a screenshot of it and opened it in Paint. I cropped a bookcase and made sure the final size was 32x64. I followed a tutorial for Gimp and made a 3x4 block, put the image in all 32x64 blocks and exported it as png to my pc. I changed the file name to add the $. Then I imported it to my Resource Characters. I made an event with it and move away from player and it worked perfectly. The problem is that it is a different size than the original which means my cropping was not accurate. So the question is how do you isolate an image from a tileset and be assured that it is the proper size?
Thanks

12/28/2021 12:46 PM
I have set up a Battle Process as I have successfully done several times. This time I am having trouble with the battle stalling after the 1st round and getting a screen that makes no sense.
The first round executes Boss and party all attack. Then just the BGM.
I am showing the Event pages, the Enemy and Troop setups, and the screenshot that makes no sense at all.

This is the Enemy setup page: 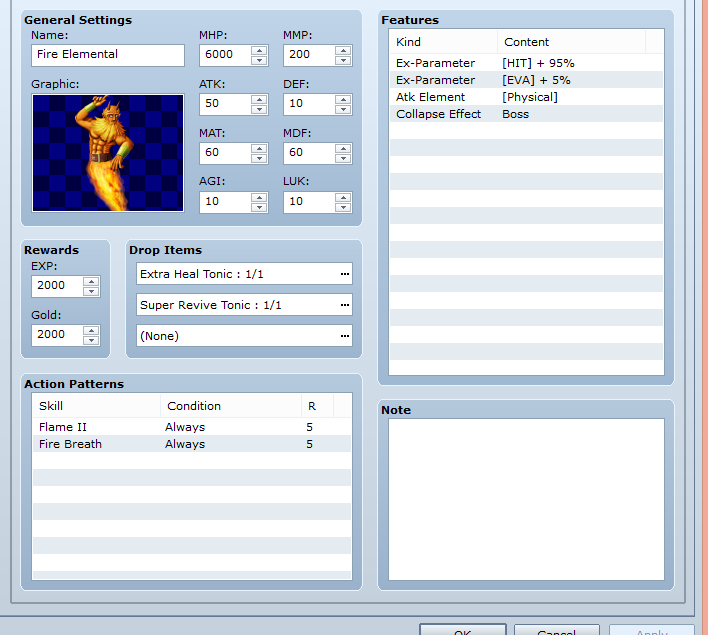 This is the Troop setup page: The battle test worked perfectly. 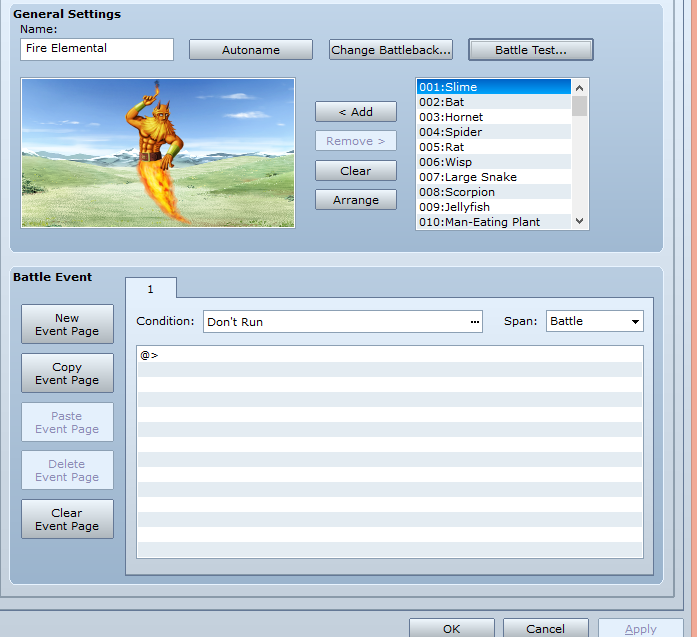 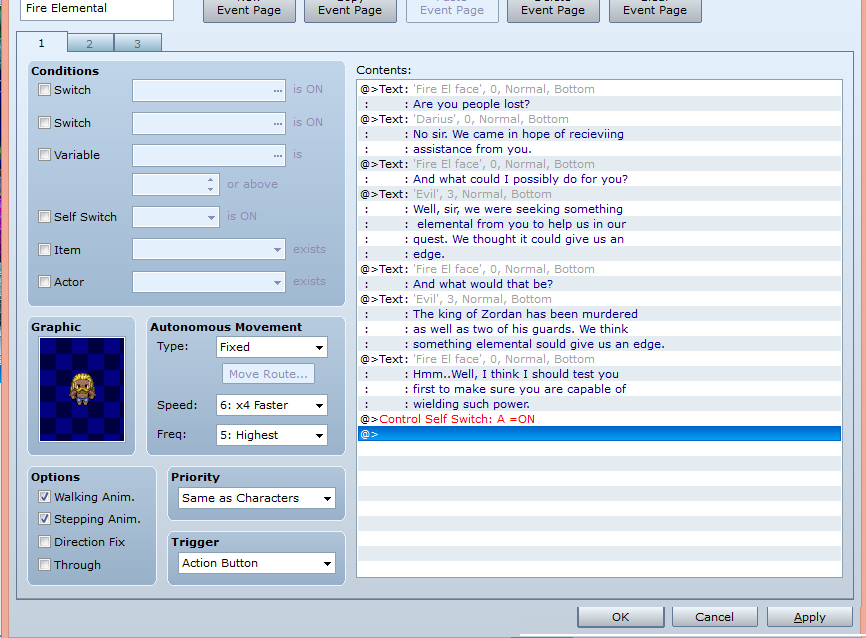 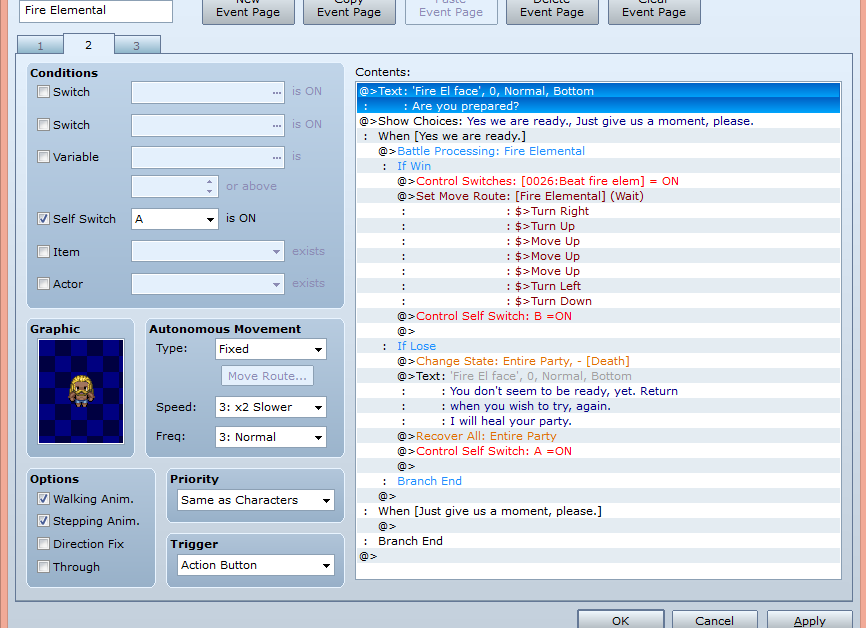 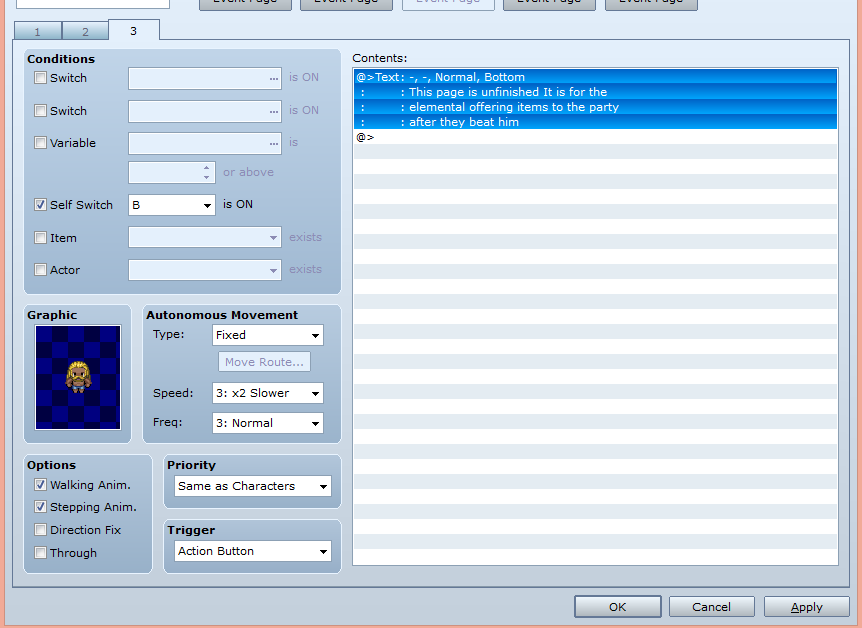 Image that makes no sense. It say "was slain" but, nobody died and it doesn't say who was slain???? 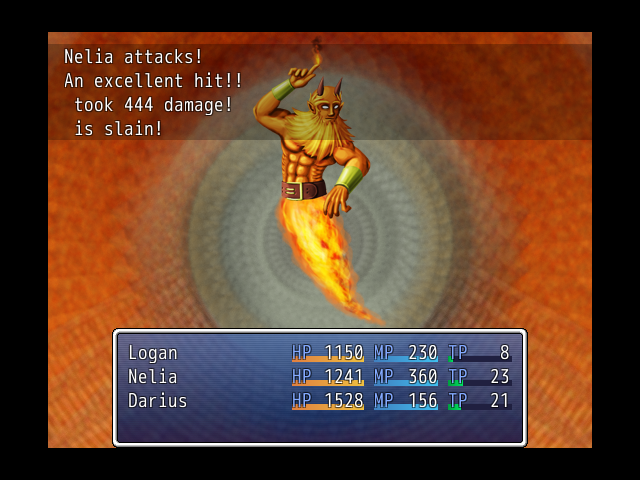 12/05/2021 01:47 PM
Are certain skills only for certain weapons? I have a character that has AXE as a weapon. The Skill (Double Attack)is set to become available at L10. It does not activate at L10.
I tried adding that skill in the Features section and that didn't work either and
if it did wouldn't that make it active at the beginning of game? 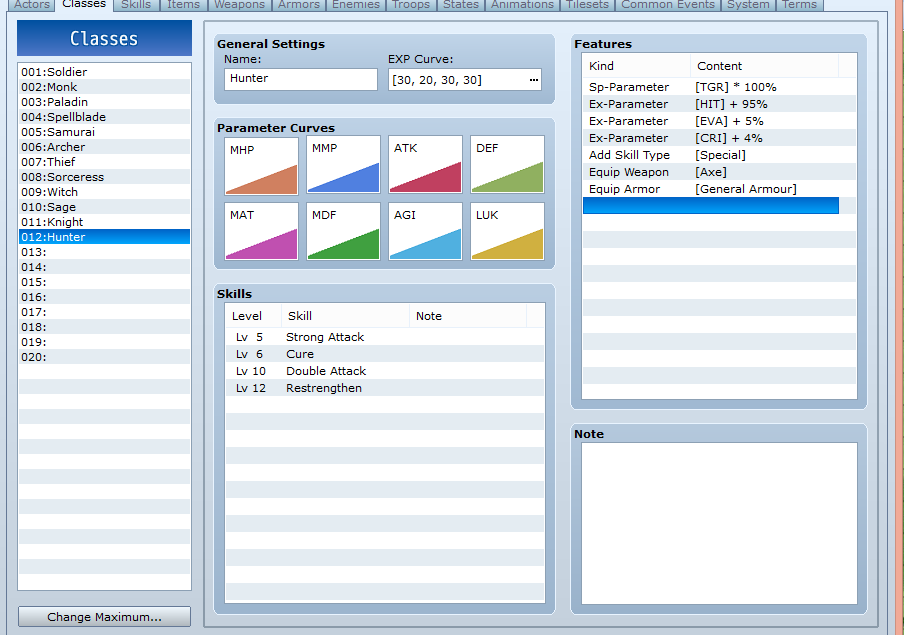