Close
my advice for life 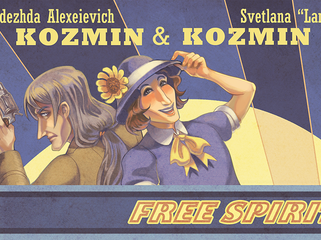 A historical urban fantasy RPG where you DON'T punch ghosts in the face.


Ahahaha I guess it has been a Hot Minute, huh?

Alas, I made the move away from game dev and towards Taking My Clothes Off In Public, Writing Poetry, and Being A Filthy Academic ¯\_(ツ)_/¯

One day I would love to come back to game dev, but alas: that day is not this day. I'm progressing the Gay and Trans Agenda in other arenas these days! But thank you for thinking of this game, it really meant a lot to me how many folks were INVESTED in my vapourware, bahahaha. Who knows, though, maybe one day I'll scale back this project and make it. Maybe not. Fingers crossed that I do, I miss making games!

author=Dyluck
This is an ice screenshot.

i love this comment because idk if you're trying correct dyluck or if you're complimenting the pun, and tbh that level of ambiguity tickles my brain

What are your opinions on the recent Yooka-Laylee controversy?

Let's be real, guys, the dude has been saying increasingly inflammatory things throughout the years. A company deciding those things are too far off brand isn't censorship or a denial of free speech, it's just good business. Every time one of these dudes that likes to say LITERALLY THE WORST THINGS finally gets a slap on the wrist, I say a very loud and jovial thank you.

Part of the problem is people like this thinking they can say whatever the fuck they want regardless of consequences. Well, now there are consequences. Maybe people will think twice about being openly bigoted in the future if they wanna keep their livelihoods.

(And anyone who wants to jam about free speech: that is irrelevant in the private sphere. It just means stuff like Trump can't arrest folks in the ACLU for the work their doing, not that a private company can't respond to some dude's bigotry)

Anyway yeah tl;dr my sister and I were literally cackling with glee about this over the weekend; more social and financial consequences for people advocating systemic violence because APPARENTLY "hey that hurts me" isn't a good enough reason to shut the fuck up

i feel like genji's sweet ass has everyone beat

author=Dyhalto
Yeah, that's where you could argue for a private option. I'd argue that private interest would eventually override the public system, but meh. We're a thousand steps from ever having to debate this.

can confirm, up here in canada that is what happens. We have a fully funded healthcare system, but neoliberal interests have been paring down how much money goes into the system and pushing for a split model for ages. There's already instances of it, like if you require medication that is only sorta covered, and if you have an ageing parent that needs assistance to stay living semi-independently, well, good luck accessing the publicly funded home care! There's not even close to enough.

And then the governments that fuck up the system start saying it is inherently flawed (RATHER THAN INTENTIONALLY DEFUNDED) and we start having the "is privatization good????" debate.

author=SnowOwl
If it's classism, what does male or female have to do with it? I think you need a lesson or two yourself.

Thank you SnowOwl for volunteering as an example of "how to determine whether or not the convo is worth having/is your audience assuming good faith/do they want to hear what you have to say"!

As we can see by this statement that I literally addressed in the second paragraph when I said:

We can determine that this is NOT a person with whom we need waste our time. If someone isn't even willing to read what your write before responding, chances are they are not interested in a real discussion. EDIT: better put, why should I waste my time and effort writing more things that someone doesn't plan to read?

author=Housekeeping
And, I do agree that the idea of privilege as being tied to ethnicity needs to be dialed back a bit and attributed more to economic circumstances.


The word you're looking for is classism! A pretty obscure fella you probably haven't heard of wrote a lot about it back in the day. He wrote a manifesto and everything, I think his name was Karl?????
(because tone doesn't carry through text: I'm not making fun, just being cheeky)

...but yes. I think a thing that trips a lot of people up/overwhelms them is the fact that privilege is actually a SUPER huge topic and there are a lot of points of places where the privilege/oppression duality can exist. In my experience, it's less useful to focus on individual identities ("I am a straight white male but I'm poor and disabled where do I fit???") and more on systemic issues ("We live in a country that unfairly prioritizes men and masculinity in ways that does damage to people of all genders; how does that affect my life and how can I change it?"). It creates a better sense of community and allyship, and is oftentimes less difficult to parse. It also shifts the focus off of "so I'm Privileged: what do I do now????", which, tbh, is a really frustrating conversation to have with someone (been on both sides!! It is frustrating from all angles).

If you take some time to read some legit discourse/social science literature instead of people screaming at each other on the internet via blogs or forum posts, you'll find heaps of evidence that literally no one is ever saying all straight white men or whatever are individually SHITTY AND BAD AND THE WORST AND PRIVILEGE!!!!!!!! Instead, you'll find people examining patterns that benefit some and oppress others, and who are working to change that.

Obviously people still get their feathers ruffled if you say something ~radical~ like "hey did you know poor people get treated unfairly and are exploited by the upper classes?", especially if they benefit from that exploitation. At that point, you just get into the habit of separating people who choose to be willfully ignorant of observable patterns studied by people far more intelligent and educated and experienced than they are from people who see the same thing as you, but may have alternate opinions about what it all means. One of these people you can have a constructive discussion with, the other you can't (and for the people you can't: that's when you bust out the memes or straight up walk away because u love urself and don't want to waste your time).

Really tho, I would encourage anyone and everyone who comes across discourse about stuff like privilege and goes "eeeghghhh IB" to check out some introductory social science materials! There's a lot out there that's super accessible for peeps who aren't, um, as intense as someone like I am is. It's just good info to have, and buffs up your critical thinking skills.