07/03/2015 08:12 AM
@Robbles_Quin: あなたわばかだいよ？
Look Robbles_Quin, this is a design conversation topic, in a design oriented thread. It's about talking about a game in progress, a system in progress and stating your thoughts out loud. It's not the place for advertising new game projects; HELP ME! is designed for that.
I was going to let it pass, but then you started claiming that it was written by Tite Kubo. The same Tite "Oh, let's release a chapter once a month and for all of December 2014 not work" Kubo. The man who is as lazy as the infamous Kinoko Nasu.

More then that, he has a deal with Shukan Shonen Jampu, that in turn released games on major platforms such as the PS3, and Nintendo DS. AND~~~ You think he is going to sell his licence to game made with rpg maker. Look, maybe you are in Japan on a government sponsored visa or not (It only takes roughly 80 people a year, so odds are against you on that), but if you are in Japan and follow the subculture, you definitely would know that Mangaka don't take many apprentices, or even associate with normal japanese people often. Do yourself a favor, go to the Arakawa and wash your head before you try to argue that this is true, that a multi-million dollar franchise's licence will be sold (And mark you, it will have to be purchased for rights!) to a RPG Maker Developer.
You want to make a fan game, good! Great on you. I'll love to play it and review it. But you want to say it's by Tite Kubo, then you have some reality you need to see.

07/03/2015 03:41 AM
This is why people should just convert to Shintoism. It's so much easier to be a polytheist and pray to many gods of different elements, then one mono god. You can even interpret it in the hindu sense of God having many faces( A concept that exists in Christianity and Arbrahamic faiths believe it or not.)

Praying for good fortune and good harvest is much better then being married to so many different doctrines. Live a simple life, hold faith and question everything you are told. It's much better that way.

07/02/2015 04:45 PM
I was raised a military christan, where the core philosophies are "God will protect his men" and that "Righteous Justice" is our duty.
That being said, after moving to japan, I became a Shinto believer, and enjoy the visits to shrines as othen as I can go. I know there is a God, but the rest I believe to be corruptions of one true religion in the old days.

author=LockeZ
Facesforce, I never thought I'd say this, but... this is why RTP was invented. So you wouldn't have to make screenshots that look like that.


Actually LockeZ, it's because I grew up with it that is making me want to try and use this style to force me to make the game-play and narrative more interesting. It allows me to take something familiar to many people, and use it in a new way, as well as force me to focus on actually building the game in general.

Besides, I've been more active in the rougelike community for the past two years, and I love the atheistic. It forces imagination to take over, like old time radio used to do.

Now for something more spartan. 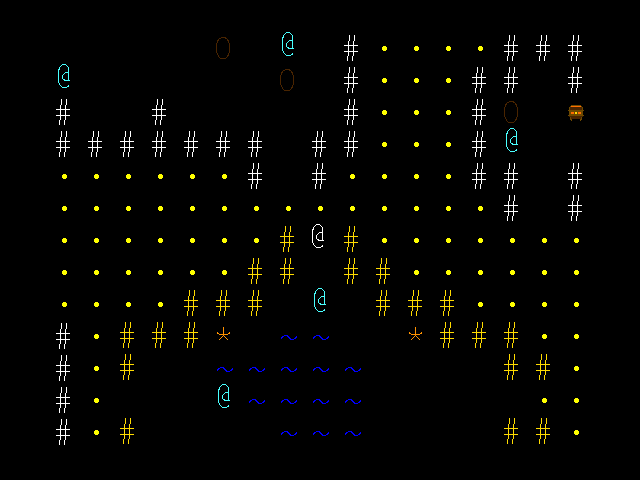 I've decided to go with courier new as my terminal font, as most people have it installed on their systems. The color limit I am self imposing is actually not from a 16 bit dos, but rather the 256 MSX2, which was my first computer and as such brings back so many memories.

Very few things will use basic sprites, such as chests, while everything else will be pure ASCII all of the way. This is a Oasis town made of tents, with the water source surrounded by old ruined walls.

The final version in game will hide the top two lines, as they will act as a text buffer for messages. Yes, I know, a Text buffer for a RMVX ACE game seems absurd, but it will be for the sakes of recreating that old style feel.

(We all knew that this would follow the trend of normal internet conversation. 1.Celebration, 2.Arguements/Anger, and 3.Welp, Welp.)

author=JosephSeraph
well, regardless of all of that it's a fact that american kids born today will be surpised to know one day equal marriage wasn't everybody's right.
aaaaaaand there will be a lot less bigots then too. So we just gotta hold onto ourselves and not hide, society is already digesting us. We're part of it, and we're becoming more and more as time goes. One day, people will be as surprised and horrified of this past rejection of the lgbtqia as we get when we know women weren't (and still aren't, in some places) allowed to vote/work/study in the past.


Or we will enter a new dark age when the currant roman empire finally collapses, and new wars start springing up for the remaining nations to try to seize up the remainders of the American empire. Once the military that occupies 70-80% of the world is gone, the war will spring anew and spread like wildfire and the world will enter a new dark era.

This is the cycle of history. We are only now reclaiming the rights we had when we were Roman and not American. Now we are American, we are celebrating these small reclamations, but mark my words; This is only a reclamation. There will always be the men who lead, and those who follow, and as such, ideals will branch off. There will be bigots no matter what.
I'm just waiting to see what will happen...

Oh well, it does not really matter that much; At least it is good news that America has gotten this out of it's system, so hopefully we can focus on different issues.

However, I got to say this; I'm not comfortable with how some of the gay-rights advocates are so militant to try to silence any opinions to the contrary. I personally am a advocate for people to keep things like kissing at home, be it men or women, as I was raised a traditional southerner with old dutch customs, but when I advocated this before, instantly many of the people who were celebrating the news in America, automatically start shouting me to silence and delete my opinions.

It's disheartening that the homeland has some people that while celebrating a new found liberty, are so uncivil that even discussions of manners seems to be taboo.

How did your first game turn out?

It was a rip off of Dungeon Keeper, if there was no simulation, creatures that would not do anything and vice versa. It was really bad.