06/24/2015 10:40 AM
After another long hiatus from RM Game Making, I have once again dived into the world of ascii, and I have developed a event based combat system, that is so bloody circumstantial it drives me crazy.

This basically becomes a series of both characters dancing around on screen, forcing the player to observe and think of possible ways to take advantage of the battle, all in a text based, ASCII rendered world. But it's a nightmare in eventing.

[RMVX ACE] How can we make a picture sized sprite?

04/26/2015 08:22 AM
Hello, and once again, I'm trying to break RMVX ACE by working on a different 3d dungeon program. So here is the problem I've hit this time; I need a full sized picture to act as a sprite. Namely, this rtp one as a demo: 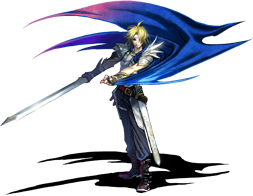 I want to use this picture, in its full size, as a sprite. he engine I've got cobbled together, can render sprites fluidly on the 3d dungeon map. The catch is, that it is cutting the sprite into parts. Does anyone know how I can use a single picture as a sprite in RMVX ACE?

10/10/2014 01:49 AM
*sigh* And now my chinese friends are confused why I only know Han Chinese.
Am I the last philosopher obsessed with studying the truth?

author=nhubi
Hey pianotm, yes I realise the different level of importance, hence the line about a fictional persona, I was thinking about Link, but whist I don't place a high level of importance on this I do find it an interesting phenomenon that there is a difference between fictional and real but the fact that we interact in a virtual arena seems to add a level of unreality to the perception of other people here. It's almost like all us fall into the chasm between fictional and real for everyone else, so the natural reservations that some people have about revealing voting preferences seem to fall away.

I mean who we truly are on the other side of the keyboard may have little or no bearing on the persona we portray here (or inversely may be a completely true representation) and indeed is in some way fictional...and now I'm seriously veering off topic, even in a Welp forum.


We are the faceless embodiments of our waking psyche, a mere reflection of a mask upon the restless water. Because who we are is distant from our persona, it's easy to speak our minds; The fragile falsehoods of reality can be set aside here, for our true selves are sheltered.
Voting preferences, that is the revealation of them, is something more influenced by local culture then anything else. I was raised in the Netherlands, and we don't discuss modern politics that much, more focused on the past then anything else, where when I lived with my family later when we moved to america was a eye openning experiance where people openly debate such things, and now here in Japan where such things are only discussed by old men at izakayas. I have seen 3 very distinct cultures, with 3 very different approaches to such ideas now, and I still have no answer why this is.
But on here, it is merely for fun, a jest in the midst of the unseen chaos lurking beneath the murky surface.

I like Kentona,but me and Deckiller have had a Holmes and Moriarty style relationship. It's hard to decide~

10/09/2014 12:08 AM
Going to be honest here, as a man who has made a living as a magician and a salesman, appearance is everything. Companies want people who look the part; That's show business. It's a simple straight forward case, if you happen to have traits that people find commonly "attractive", you are going to have a easier time in certain fields of life.
In the end, Life is not fair, and nothing is truly equal.
People pushing these issues always irritates me.
Thus I moved to Japan, where people are sexist/classist/racist/lookist on a common base so I can happily live with my 50s world views without people constantly trying to force confrontation on issues I disagree with being issues at all.


Kentona Jr. will save us all.

author=Antilurker77
So Terror in Resonance finished yesterday. A perfect example of an anime with great concepts but god awful execution.