Since I finished the true good path+, I think having a new game+ feature is a good idea. Since we have the identify book feature, if I can restart the game whilst carrying the previous records on the identify book, house, stats and items, I think it'd be great! Especially for completionists, it'll make them play your game again and again.

I know it'll be a great challenge for you to add this feature since tracking all of those variables are not easy, but, I have faith in you. However, I don't want you to push yourself too hard either, so please take it easy as it's just a suggestion.

As I previously stated, this game never fails to entertain me! <3

Anyway, I am confused what to do after I finished the game. The game teleports me back to Qual village and then there's no clue at all on what to do.

I also found a bug when I went underwater:

author=sawworm
Oops... Guess who forgot to change "transparency" effects... I'll fix that ASAP. Thanks for that! But you gotta do the ending again...

Edit: Should be fixed right now.


Wow, that was quick! You're amazing

author=sawworm
It's been 2 months since not seeing sunlight, lol ;_;

Ewm... by the way, I don't know if it's a bug or not but, I when I finished the true good path+, the game teleports my party back to Qual. However, my party is invisible! I can still move my character though but, extremely slooooowly and unable to save. Then, I tried to use the teleport scroll, and a message appeared and said "I need to find Z*****m first". After the attempt to teleport, my party walks normally and can save the game but they stay invisible. 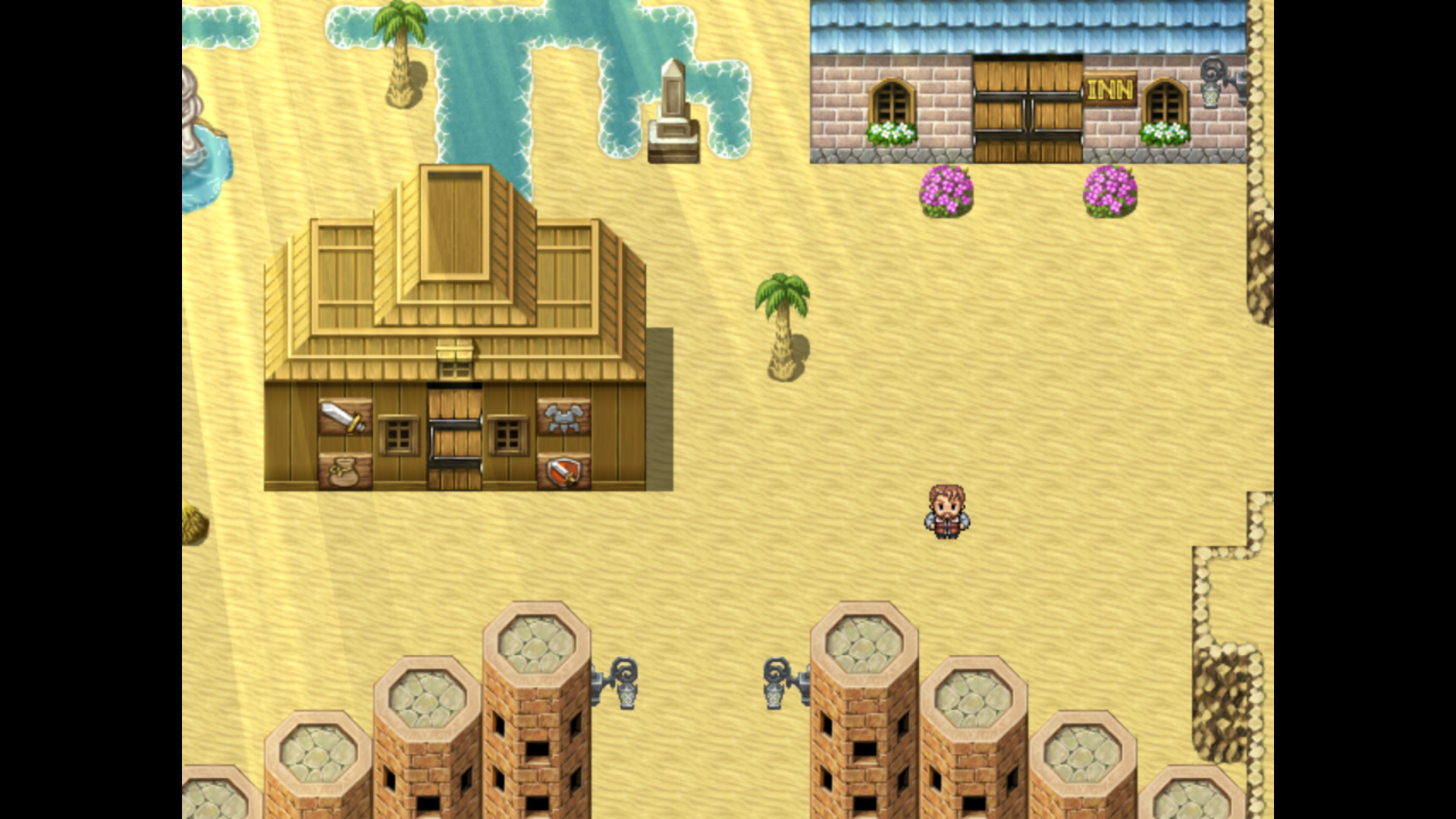 author=sawworm
It's great to hear that! Take care yourself.

Thank you! I hope you are doing well too!

Okay, I'll make sure to take a screenshot if it happens again.

author=sawworm
Expanding player home is my first goal right now, gonna add some side quests for it.

Whoa! So excited hearing this! Can't wait for it :D

By the way, does the game has a new game plus feature? Like, once you finished the game, you can start all over again with the current stats, gold, inventory, etc? And also, when I traveled to the past to meet Z*****m, I managed to defeat the Ice monster but, got defeated by the Mage Slayer. Is it possible to defeat him? Because it seems that I can damage him, unlike the first time I met him where all of my attacks are null. I hope you don't mind that I'm asking so much questions :)))

It's a pity that I couldn't move my data from version 0.7.0 to the latest version though, if it was possible, my party would be a gang of broken stats :v

1. The game sometime closes on its own, the error message was "method not found" or "no method error" especially when I try to save the game.

2. The pearl quest can be taken for the second time when Icywland changed after defeating the great tower

3. Past events won't be recorded as achievements. I defeated Leviathan in version 1.0.0, when I moved the save file to the steam version and loaded it, the achievement didn't pop up.

I don't really mind the latter issues though, I'm only concerned on the first one. Will there be updates on the steam version in the future?

author=faroukrizki
Just went back from the hospital and saw this. Bought the game! <3

I hope it's not related to corona, be well!.. and thank you so much for the support! :~D

They said that there was a possibility that I got infected by the corona virus from the symptoms. But, thank God, the test result was negative. It appears that I have an infection that disrupt B12 absorption. I had an infusion and got better.

04/27/2020 04:37 PM
Hi @sawworm! I just maxed out my character like my old saves from the previous version. However, I noticed something different. Does the newer version has any changes regarding character stats? I think my Grey Knight in this version has more AGI, DEF and MDEF but less Max MP. Also, Duran's Time Blade class AGI drops significantly, the difference from the previous version is almost like 30 points, I'm shaken 0.o

Are there differences in skills and magic too? The previous version that I played was version 0.7.0, I wanted to know which skills got toned down or up as I want to use stats boosting item on some of my character tactically.

author=blu3
I wonder if anyone can help with couple things please :)

- for fishing locations : where are Gwyndia, Left Trin and Pure Chest area?
- does ultimate weapon exist?
- I found Qual, does she only have 1 quest for Suan? I still have no clue as to how she can help in defeating Chronos (apart from appearing in every location I visited). I have 2 keys now but still want to explore a bit.
- is there any way we can teleport without using the scroll? It can be tricky when money is tight :(
- I only have 5 quiz cards so far, how many are there and where can I find the next one (if any)?
- in the Jobs and Difficulty notes, I can see Hybrid Monk and Archer but who are they? I found and saw Bow weapon but not sure who can use it.

I can only answer three questions if you don't mind.

As far as I remember, in the earlier version, ultimate weapons and armors do exist. You have to finish certain quests for this.

If your money is tight, you can just hunt in the haunted mansion near the rest area. Use Juliet's Radiant Blade to instantly kills everything in sight. When she run out of MP, just rest, it's free.

Certain actions can change fate and may determine your party member. If you watch the Shattered Hourglass page on Steam, you may see that there's a character whose name is Jannet. I don't know the detail since I've been playing the Good Karma path and haven't tried the other paths.

author=boos405
Hi there! Do you think you could create another easy difficulty? The last time I played the game I found it a little on the tougher side, I know if I grind it'll be ok but here I'd prefer to have a much easier difficulty option to the grinding.

I think I chose easy or something like that too at the beginning. So it's quite tough a game. If you can't for a reason such as it requires a lot of balancing, I get that, I'm thinking / hoping a script can lower the stats and it'd be that easy, which sometimes is the case and often isn't so yep. If not, never mind.

It's still a good looking type of game, and enjoyable to playthrough if you like that type of difficulty.

Yes, it's a quite tough game I'd say. However, I think this is what makes this game fun. If you have the right setup for each character, you can do well even in hard mode or, even in loot hunt mode. Duran's MP is basically infinite, Zulwhern's arrow attack is quite OP (12 hit in 1 turn is sick), Suan is just badass, especially his terminator class. Juliet's white magic is useful and her radiant blade is extremely useful if you're item hunting and Treephop is OP for early game and... he'll turn into a great potion user late game!

2. If you need money, go underwater. The clam monster drops quite a hefty sum of money. If you find it troublesome, buy potch of greed to double the money earned and fight in the haunted mansion near the rest area. Use Juliet's Radiant Blade to kill everything in sight. If you're low on MP, just rest, it's free.

3. Trade the tournament points for the last item that cost 300 points (I think?). It's an accessory that increase all resistance by 7.5% and it stacks.

4. Equip weapons with multiple elements like the Omni-Sword. If an enemy is weak against one of the elements and resist the other, it'll use the element where the enemy is weak against. Exploiting the enemies' weaknesses can turn the table and shake them up. Another great example is to let Zulwhern use the Gray Knight class while equipping Windy, his attack then will have 3 elements, holy, dark and wind.

5. Don't hesitate to use potions! The enemies drop them almost like all the time.

6. Use weapon masteries to boost your attack.
Pages: first 123456 next last