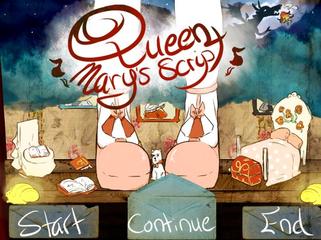 Show
The passage at the bottom of the maze on the wall doesn't work?? Does a message not pop up or does it transport you somewhere else? I'm asking just because other people haven't had trouble and if it's a bug, I'd like to fix it ASAP.

07/21/2014 05:59 AM
^ Thank you for pointing it out. I don't think I'll upload a version with a fix since it's kind of an easy bug to avoid but at least I'm able to fix it for the Japanese version.
Again, sorry about that! I hope you enjoy the rest of the game!

07/21/2014 05:16 AM
^ Oh no, that's a bug! I'm so sorry about that!
Show
You're only supposed to be able to do that when Nicholas is talking with Peter in his room. Then when you look outside, Amanda's supposed to be there.
But I just looked and realized I didn't use the right switch in case people examined the windows after that point in the game.


Were you able to get out of there or did you get stuck?

@Kylaila: Agreed. There was a lot about QMS that needed to be fixed in both story and gameplay. I hope I was able to grow from then with RMC.

Inspired by art and music to make a game?

06/10/2014 07:57 PM
^About making a game based on artwork of a series, I can see how it happens. So long as people don't use the characters and such right off the page, I don't see anything wrong with it.
It also doesn't help that there's so much unsourced art out there, we may not know if the picture is from a series at first.


Music is my biggest inspiration for games above art and anything else. Probably because I spend a lot of time in the car listening to music and daydreaming random scenes. I can usually name specific songs that inspired my series.
Like... I've been wanting to make an idol fighting game for FOREVER but lack the programming or genre know how to tackle that task. So every time I listen to a few select j-idol tracks, I'm itching to create this game I'll never able to . It's the worst.

06/10/2014 07:15 PM
Man, I've been on such a PSO hype recently.
PSO is still to this day the only mmo I've ever been able to get into. I played it on the Dreamcast as a kid and played it on private servers as a teen. The customization was my favorite part as well as the fighting mechanics. Everything about it was great for me.
PSO2 is fun too, but it doesn't really feel the same. Maybe it's because of the whole arks cash thing orz. I love the wide array of weapons though and the inclusion of mags.
If my friends were into it, I'd probably play it a lot more. But it's not really fun solo.


Are the PSO2 servers really region locked? I never noticed! That really sucks for people that can't even try the JP version if they wanted to.

author=Schinksi
I really enjoyed playing this game! It was so interesting and the atmosphere was fantastic!