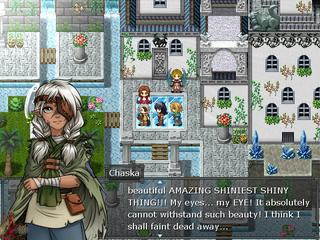 So I finally released a music pack.

Been holding back on this, but I finally decided to release stuff publicly. This pack has 36 BGMs and 6 MEs of what I consider my best stuff.

Here's the trailer for it: https://www.youtube.com/watch?v=yjyYOkoDAGE

Matt Taylor lands probe on comet, but is now (in)famous for tacky shirt.

But this is bigger news: Researcher on the project shamed and attacked for wearing this tacky shirt with semi-nude women on it.

Allow me to share my latest project with you. RMN is where I grew up as an RPGmaker, and thus, here we go.

Summary
Skyborn is a story-driven, steampunk game. Magic meets metal in this world, powered by coal, steam, and technology, with a backdrop of magic and myth. Steampunk is a setting with its roots in 19th century England, in the industrial and Victorian era, all adapted for modern times and used as its own fairly new genre of games, movies, and especially... outfits. Skyborn takes you into a fantastical journey, from gritty, industrial cityscapes, to beautiful ancient ruins, and even into a realm of pure magic.

Life under the rule of the winged Skyborn race isn't so bad for Claret Spencer, the star mechanic of an independent repair shop. She can patch up just about anything...but when a certain cravat-wearing customer turns her life upside-down, she finds herself pulled into an epic, city-wide conflict that's going to take a lot more than elbow grease to fix!

Features
-The focus of the game is a mostly light-hearted adventure. The character interactions, atmosphere, and story serve as the engine for the experience.
-Full-sized busts used in character dialogues. Full array of expressions as well, really brings the exposition to life.
-Mouse and menu bar. Thanks to the masterful work of rpgmakervx.net's Mithran, the mouse is leaps and bounds ahead of any previous iteration. It has easy navigation, easy clicking, and is fully capable of navigating through the menus intuitively and quickly.
-Threat, tanking, and CT systems make for a more tactical, streamlined combat system.
-No random battles. All encounters, other than scripted sequences, are visible on the map, and for the most part, easy to avoid.
-Exploration nodes! You can level up adequately, simply by collecting exploration nodes. They will grant xp/levels and can be found in the nooks and crannies of the world.
-Mining, crafting, and augmenting. Mine ore, take it to a forge. Turn it into a piece of armor. Then, take that armor and further customize and enhance it with a magical augment. Augments can be overridden without losing the piece of equipment, but it destroys the augment item itself.
-Battle retry. No automatic game over upon losing. Hard to lose anyway, without setting it on "hard" difficulty, the setting tailored for veteran RPG players.


Excerpts from the Skyborn Original Soundtrack
Snippets from Skyborn's OST... give it a listen!

I really wish I had infinite time, so I could do tons of these. They can't be used in any soundtracks so they're just for fun, shrug.

Immediate edits should not be displayed in posts

06/17/2011 09:57 AM
Just a suggestion: most forums seem to have a feature that allows for a certain small amount of time after a post in case a typo or grammatical error needs to be fixed, but RMN is ruthlessly draconian when it comes to edits that are submitted mere seconds after posting.

I modified the ending to Deadly Sin 2. She did say yes!

House Of The Dead Ninjas

This is a game developed by Sovanjedi's studio. It is highly addictive and entertaining, and features some deliciously retro features, such as the Nintendo-era instruction manual. (Worth looking at even if you don't need any help!)

Basically, you are a ninja tasked with a mission... get to the bottom of this seemingly endless tower, where some fantastical treasure awaits. Only thing is, in the way are all manner of traps and baddies trying to kill you, as well as the inevitable clenches of time, the ultimate killer. Each life lasts 30 seconds, but the timer can be refreshed with frequently-placed power ups.

Every bit of the gameplay is randomly-generated. The generator is pretty good, offering a variety of placements of enemies, power ups, and level formations. Your ninja can slice and dice with his sword and short range, use shurikens for long range, or drop bombs for some aerial bombardment.

It can be frustrating when you go to fast and end up dying stupidly, but overall the game has kept my attention for a good 15 or so fast-paced, nerve-wracking playthroughs.

Fun, addictive, not for the faint of heart!

My official album: compilation from my soundtracks, give it a listen

12/01/2010 06:40 PM
Hey, a couple months ago I compiled a hand-picked group of pieces from my two most recent soundtracks... and released an album. It's an "official" album, so it has been published, but it's free. You can simply download it or listen to the previews on CDbaby.

Does anyone else think facebook feeds, polls, and quizzes are the downfall of civilization?

But seriously, they suck. Every 5 seconds: "I just pooped!" Then 17 people who "like this" and 7 comments congratulating them.

Then there are the quizzes. "Can you name this celebrity's buttcrack?" "What flavor of ice cream are you?" What day of the week are you?" Here's my question. "How pathetic is your life that you have time to answer these quizzes all day?"

Then there are the polls. A mini-political arena. "Do you think (cultural icon x) is an asshole?" <-- Let me translate this poll for you. "Do you think everyone who disagrees with your world view is automatically an asshole?" answer is apparently yes for everyone.