Been around the scene since the early 2000's. 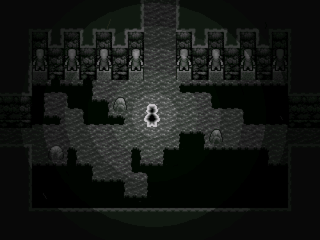 Entering the world of internet communities can be a frustrating experience.

05/03/2021 04:55 PM
You don't need to review my game (since it's incomplete and I didn't have time to test the event version properly). Just hearing your general thoughts is cool enough for me.

I've Done what I should have Done Long Ago...

One issue that RPG Maker 2000 has is that regardless of the amount of steps per random battle you set, sometimes it will glitch out and you'll have a random battle immediately after the previous one, after walking only 2 steps or so.

For that reason alone, a custom random encounter system is very useful! That and the amount of creative stuff you can make with a custom gameover screen or to add penalties for losing.

05/01/2021 05:12 PM
Thanks, Avee! I'm still not functioning at 100%, but I managed to make some changes that made the game much more reasonable to play. I usually don't release games without testing a lot (as you can tell from my other releases) but this time I thought it would be ok and I really wanted to participate in the event... but it didn't go that well at all, the game really needed a rebalancing.

@pianotm thanks once again for the input! I had planned to add an NPC warning about mimics, but from what you say, that may not be enough. I'll have to think about how to deal with the mimic in the finished game, since I don't want to make the ice dungeon enemy's harder.

@Ulevo thanks for the kind words! I wanted to make an old-school style RPG Maker 2000 game, so I'm glad that you find it comfortable to play.

@Marrend thanks for the feedback! I'm really frustrated about the missing file error :/ that alone invalidates my entry since it doesn't run outside of the box. I thought I had tested that when I was feeling better, but somehow one of those slipped by me. What happened was that I got ill midway into the event and couldn't test enough or finish the project. Since you mention the game is hard, can you let me know if you played version available here or the gamepage version? The gamepage version is much better balanced since I did some changes after the event.
Thanks for playing!

04/30/2021 01:29 PM
Thanks for the feedback Avee! I agree with all of it. Unfortunately the game is incomplete and it's missing things (such as the option to recruit another character).

To anyone who wants to try out OATH, I recommend downloading the latest version from the gamepage since it's been rebalanced to be reasonable (and a lot of stuff has been fixed). You can play up to the first boss (everything else isn't finished so you can quit there, but you can keep your saves!).

Edit: also, congrats on completing the first boss even though the game was punishingly hard at that point!

04/30/2021 03:13 AM
@Deckiller I'm so sorry! OATH is in need of a rebalancing, and it's missing some things right now, but I got ill and just managed to wrap it all in a neat package to upload. I didn't even add NPCs in villages. But I'll finish the game after the event, once I'm feeling better. Thanks for the kind words and feedback! I'll act upon it as soon as I can.
Pages: first 1234567891011 next last