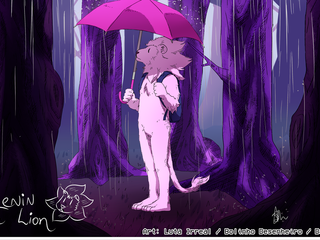 Lenin - The Lion, is a Drama RPG Game where you control an albino lion, the only one of the species. Because of that, Lenin suffers depression and needs to fight against his inner enemies.

author=Rdavo
I wrote a review for the game but I think for some reason I will have to resubmit it. Anyway, I really enjoyed the game and hope to see it complete soon!

Thanks for that! I really appreciate it :D I hope more people feel the same as you playing the demo!

author=FishSlapp
I seriously can't wait for the full game release. Even for just a demo, this had me in tears, I love the relative situations that a lot of people go through. The themes, the graphics, the music, everything.

I'm glad you liked the game! The full game release will mainly depend of the crowdfunding campaign this month! Soon I'll talk about its date here with you guys :)

author=geiruhawaadotn
OMG I LOVE IT !!!!!
I love your characters so much, they are so unique <3

Oh, that's amazing to read! I'll reveal more characters soon too, so keep an eye on it!

author=NovoVerso
Hello, where can I submit some screenshots with bugs?
And do you plan to have DASH implemented? I feel like Lenin's movement speed is a little bellow average haha

I guess you already sent it to me on Facebook, right? ;)

author=aloneinthisworld12
I loved playing as Lenin, he is a character that doesn't start off with childlike naivety or a dark personality, he is just himself. Neutral. I think that is really important for a game that has a main character grow especially since there are more than two options are popping up when its time to make a choice.

It was very fun to play and so far safe enough to show to children because there is nothing gory or too mature in it, just a few spooky things. The psychological aspect is what would make it seem a little unnerving like how some characters treat Lenin and how they treat each other.

That was my intention from the beginning: a game that anyone could play. A person who has never had depression can understand a little more about their evils - more directly and more subliminally - and anyone who has ever had it can play the game without feeling bad and have several bad triggers fired, but with empathy by Lenin.
Thanks for the comment!
---

Soon crowdfunding campaign news and more! And if you want to chat, enter the discord server! :)

author=JoshyPoshy
My bad, english isn't my strong language, I meant:
"Some let's players edit footage of the game, I don't mean in game personalisation, I mean: They record the audio, and them playing, and then they edit certain features, -like in Sony Vegas-, like, for example, I'm not even sure if this pertains to you: "Oh, this area has really repetitive bad music, I should change it a bit. 'Edits the song: 'The Red Coronation' during really epic game story climax'"."
There. Not to the point of changing your vision of Lenin completely, this is mostly for personal taste, I'm not dissing your choices, but some game developers don't exactly have a taste in music that includes more than 1 song. That doesn't necessarily apply to you, but if I were you, I would rather know it someone was about to play my game, and was then probably going to edit something.
P.s. I checked out the official poster, and Lenin's super cute~

Oh, I guess I understood. It's like to get opinions from players and other devs? Or I'm still getting it wrong? If that is the case: of course. I'm completely open for opinions about the songs, gameplay (when available) and even the script itself (I mean, if someone wants to say "this part needs a improvement" or something like that, there's no problem at all. Also, if who plays wants to record the game, talk about it, etc, its completely cool too!

I hope I've answered you!

Changing the focus a bit, I edited the main topic to put the Lenin's Theme, that is the song below:
Lenin's Theme (By Jordan Pool and Kieran)​


Hope you guys enjoy it!

author=JoshyPoshy
This seems very promising.
What about let's players who'll edit this to add their own little bit of self into the game? I'm asking for my friend Rain, since he's rather shy, even on the internet.

What exactly do you mean by "What about let's players who'll edit this to add their own little bit of self into the game?"?
In the game there is no personalization of the character or anything, but rather choices of the path to be followed by Lenin. Is that what you asked? Sorry if I got it wrong!

By the way, I also uploaded the official poster of the game! So take a look :)

author=wzackw
I just commented on your TIGSource devlog, but I forgot to mention that I like the characters, especially the design and walking animation of the elephant one! :)

I just saw your comment on TIGSource and I answered it! Ty for the tips :)
I'm glad that you like teh design, it's something that I put a lot of effort.
Hope you follow the project.

For the others, a screenshot for the last post in Tumblr:
Show author=Miremira
OMG I was so happy to see this game show up in rmn dude. I followed you on tumblr and this page looks awesome too! I'm really excited to see the progress of this game, as depression is pretty personal for myself too, so it's really cool to see a game that dives right into that realm. Literally. Lol but yeah great concept great art great choices great characters and guh I just like this okay I'll stop rambling.

Hahaha Thank you Miremira! I'm so glad that this project touched your feelings (really!). I hope to not disappoint with the gameplay too.

If you follow the Tumblr, try to participate to the little "event" that I'm doing. Not many people are participating yet, so it may be a good thing for you! :)

author=visitorsfromdreams
Great to see you here now that Im not using Tumblr, looking forward to watching your game progress!

Ow, good to know that people here already knows Lenin! I'll try to update the page frequently! I hope you keep an eye on it!

author=meaka
Ooh, it's nice to see you have an RMN page, too! I'm so looking forward to how this turns out.

Thank you so much, Meaka! You're one of the most dedicated fans (I can call you a fan, huh?). I've already become a fan of you being a fan of the game (lol I'll stop with the fan stuff).
Pages: 1