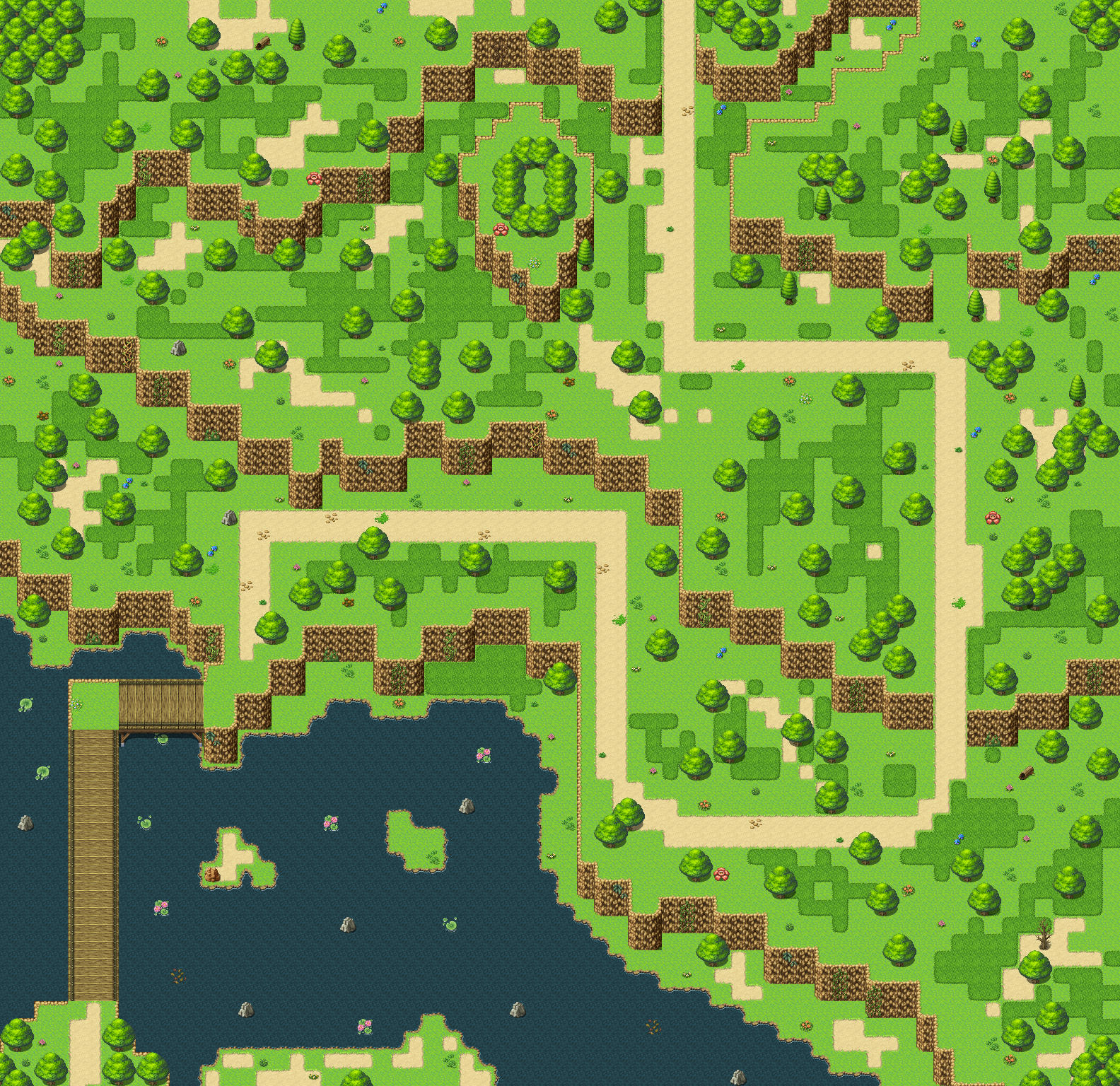 Please review the map, please. On the next page I added how it looks in game, I couldn't show an embed YouTube video at the same time as a picture, so I made another post, but it jumped to the next page.

Not to be rude, but I don't think this is any good. There's a lot of random grass and dirt patches that look odd, plus you have a very linear dirt path which looks forced and doesn't match with the other randomness.

To fix the random grass, I would say make the grass/ dirt patches in structured blobs (don't necessarily need to connect them) and don't make them have random one tiles sticking out (I find it hard to make blobs with tiles sticking out look natural. Small path like blobs are fine but if you have like a 4x3 rectangle with a random one tile sticking out it looks odd/ unnatural, well for me at least). If you're doing these random patches to fill space, I think it's also good to use the 4 clumped trees or cliff edges. They look decent enough on its own, so you don't have to draw these random bunches. The straight dirt path doesn't need to be so linear, you can add curves, shift it one tile, even make an S shape. Then there is a whole other discussion about how you want players to traverse the map, do you want them to follow a specific (doesn't need to be straight) route, or more open to explore. If you want the latter, then do you need to draw a single path? You can draw the paths in bunches to roughly guide where the player should go but don't need to make them hard commit to following a trail, cause you want them to explore other paths etc. If the former, I would say, make the path your focus, try block the routes you don't want them going to with trees/ blocking layers.

Despite my rant the youtube video (which I assume is an older one), doesn't look that bad, probably cause you can't see all the grass in one go. But I still dislike the random grass patches with one tile sticking out

You also a problem with paths going up cliffs. Not sure if you think you're using them correctly, but those cliffs tiles have a 2 layer elevation while the path just goes straight through, it doesn't make sense. You need to use the stairs tiles if you want the path to go up a cliff.

Another suggestion is to add shadows to make elevation more noticeable. The bridge on the bottom left going up, you can't really tell it's on the cliff until you see the right bridge. You did do shift mapping which helps but I think adding the shadow would make it better. Same thing applies to the cliff edges, removing the shadows make me think you think those tiles are on the same level as the grass, and makes sense why your paths go straight through. However, if you aren't using shadows in your project at all, then don't add it for just one map, make it consistent.

01/30/2021 05:08 PM
How about you guys make a forum post where people add games they think are notable then get a bot to add it to an excel. Excel could be like
Title:<name of game>
Recommeder:<person who recommended. If more people post the same game then more names will be added here. That way people know it's legit>
Tags:<category you think it fits in, e.g Story, gameplay, event, GOTY>
Then near the end of the year people can take a look at the excel and see what has good recommendations

author=reggird
Game is decent so far. But I started getting an error that is quite annoying :D "Loading Error Failed to load: audio/se/Sound1.ogg" it only started popping up once I finished and came back from the western outpost.
Also there is an item without icon and description at the shop for 0 Gold.


Thanks for letting me know. From my tests this is an error from cooking. Once again a problem with exclude unused files... If you have MV RTP just copy Sound1.ogg into the audio folder. Or just copy paste something like Item1.ogg and rename it to Sound1.
Not really sure what you mean about 0 Gold item at the shop. If you mean the accessory then that's because you can't buy an accessory so even if you try to buy it then it should just buzz. If you can actually buy a 0 gold item then that's a problem.

author=Victoria
This game is amazing! I'm in the 3 act right now, and there's a bug, I can't get the the rewords from killing boss and get the prices, when I press enter to the bounty wall says: error bounty page act 3 not found

FUARRR!!!! I deleted the wrong images... My bad. Check the newest download. (Just copy your save over, I think that will work)

03/30/2018 05:33 AM
Hey thanks for the review, I'm glad you enjoyed it. I'm pretty happy with how the game turned out as well. The major issue I have is that the game is way too repetitive, spam Z, hit and run, bosses don't have different attack patterns to try dodge (mainly cause I'm lazy) because the idea was just to make it very simple without introducing skill trees/ indepth skills etc. So that's way I included the minigames as well, just to make it less button mashing. Also the title was completely random, couldn't think of anything interesting.
Pages: 1