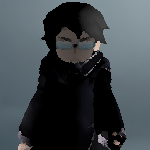 author=thesacredlobo
Well without knowing how old you were when you made this game. I'm going to assume it was those edgy teenage years that led to this game.

Also clarfiication on the story:

Spoilers if you read this and haven't finished the game.

A very long time allow on a world called Halloviah, the Hallovians (basically colored Hellioses) got attacked by a monster they will later discover to be Fuk-Thar, during the battle he somehow lost a finger. Lucius later know as the Architect, took the finger and turned it into a weapon called the Sceptre of the Architect. Lucius slain the monster using his new weapon and become what is called today a god. Since their world was pretty badly managed they decide to recreate the universe. A few years after, Lucien and his brother Hellios disagree on whatever if the new sentient life they are about to create should have consiousness or not. Hellios manage to get his hand on the staff and kill the physical body his btother. Hellios thinks that he got corrupted due to the amount of power he have so he decide to split his new power betweeen gods.

On the current day, Elysys is kinnaped because only some specific souls can contain the soul of the Architect because unknown reason. Lucien is a vampire who is basically a timeline-travelling butler of Hellios.
Pages: 1