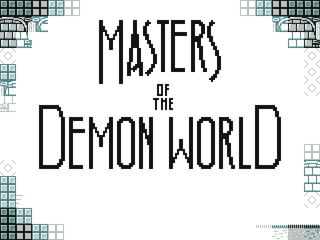 A spiritual successor to the Final Fantasy Legend gameboy RPGs

@Cap you were on top of things the whole game and I think had scumreads on all of us -- I'm sure if I'd died as lawyer, you would've figured out the doc claim vs believing Fomar was scum

@Jero I didn't have you figured you out until after the end of D1 -- although yes, I was intentionally trying to make the last part of D1 seem like as much of a chaotic rush as possible

@Demon all of scumteam was trying to get you killed -- so don't worry if it looks like no one will believe you, as usually those people have a vested interest in not believing you haha

@Tale if you haven't read scumchat, it was very frustrating to me that you played your guilty result properly and didn't announce it until all of us had checked in -- it forced us to commit whereas previously we'd all been sitting on our hands

@Odd I actually didn't solve your riddle until Fomar did, at which point I went back and solved it proper -- was fun though

@oldpat @ae this is easily in my top 3 mafia games and only behind like, the each-other game, so, here's to stupid scum plays -- let it be known the double doc thing was Emily's idea, I thought Pat should've cc'd Tale. Trying to argue my way out of a guilty read was incredibly fun

05/16/2020 10:23 PM
Ahaha the double doctor claim was simultaneously the stupidest and most effective play, AE and I were sitting in scumchat dying at the end of D1.

This must've been quite the game from Jeroen's perspective.

I think even if I died today, the OldPat/AE doctor crew could've carried it. Our plan was to probably nightkill Tale and pretend that the doctor screwed up, so Tale wouldn't be able to verify Demon.

Nokill is alright. Although Demonlord needs to die eventually, and if he's the lawyer, then tale's results become that much more valuable.

Also, a "guilty" read from Tale would definitely be valuable. Most valuable on a doc, yes, but a guilty read on like Fomar/Cap for instance would salvage the game. And if the lawyer is pretending to be a doctor, they can't hide.

@demon: Those are pretty long odds. If you wanted to convince me you weren't scum, though, you'd have to be selling me a Fomar+Cap scumteam.

author=demonlord5000
I just hope the doctor can salvage this after I'm dead.


^ also, town is not resigned here -- the game /ends/ if a townie dies today

odd, if you're there? I'm thinking of completing a lynch, it's not any different from lynching demon. Anyway- my fault for whatever happens in this phase.

If you're town, then, I guess I'm okay losing to scum-Fomar.