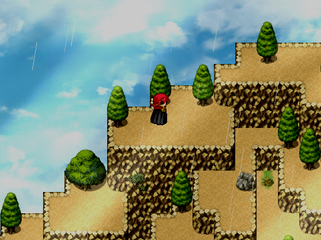 This is my first completed RPG Maker game. It is loosely based on a story/stories that I have been playing around with in my head for years.

So what's the deal with this game?

03/08/2021 10:23 AM
Think a lot of people remember and would love to return to Master of the wind universe. Shame it's using the Ace tileset though, compared to XP it's just a bit blegh.

In all seriousness looks good.

author=Stina
I'm pretty sure we all apreciate your sincerity, and it's an understantable feeling that I can really relate to (not in games, but in some stories that i've wroten in the past) so don't worry about that. It was cool playing your games. And if you need time to do it better or to drop it, both things are fine (tho a better game is always great)
Show
You know, if i'm sincere, and if you're going to redo your work from the start, would you be interested in an artist to do the "avatars" for your characters? I think it was a little awful that some characters had green hair... while their sprite had blonde hair. It really bugged me for awhile while playing learson, so I wanted to simply ask you. Send me a pm if you're interested and want to discuss about it.

Yeah, disregard pretty much everything in that blog post.

I gave up very quickly on revamping the first 4 chapters, I swear somehow it seemed like 10 times more effort than making them from scratch.

I will still be making the final chapter of the series so I can try and wrap up everything I started. So that's basically going to be 2 or 3 planned chapters crammed into one, it's probably going to be rushed and the story may go a bit off the rails but I really feel like I need to finish it now.

I appreciate the offer but since I'm no longer redoing the whole thing (or really care about it much anymore) I'll stick with the facemaker faces. I think the hair colour errors were more down to my colour blindness than the facemaker software.
Granted I never really liked the faces, I think in my next project I might forego them completely. With RPG Maker sprites I kind of get my own image in my head of what their faces look like and the face images work counter to that I find, kind of like reading a book and then you see a movie or TV adaptation of it.

I added some more info/videos to the games blog.

author=Stina
Eh, cool chapter. As most people said here, yeah, little gameplay, but it was enjoyable anyways. Felt more like a 'Visual Novel' or 'Movie' than a RPG game, but it was still good. Hoping for more?
Spoilers?

Show
Uh... tho i'm a little with shayoko here with the Ralph thing at the ending. Tho I can understand why he wouldn't fight those guards (Ralph did talk about not wanting to kill more people at some point), there was some dialogue you could have added to this part explaining Ralph's easy surrender. Like 'Ugh! If I make a scene, they could capture my son or Kai' or something similar. It's just a little ridiculous how easily he gave up, leaving his son behind after losing his daughter, without second thought (even for the player!), it came off as really forced and out of nothing.


Overall I enjoyed it <: I didn't have the time months before to play it but finally could make some now (the game was sitting in my downloads folder since like 8 months? haha that was weird). Like 5 hours playing, no regrets (:
Greetings!

Yeah, as the series went on I kind of got bored with it so I spent less time putting in stuff to do and instead focused on trying to get through all of the plot points I had planned. Looking back I had far too much story planned, really needed to cut down on the characters.

Regarding the bit near the end, I'm not sure how well it came across in the series but Ralph (even this far on in the story) wasn't meant to be that strong. If I recall correctly his previous victories came from when he had backup and later on when he had a complete disregard for his own defence/a very high tolerance for pain. The chances of him taking on multiple Eastern soldiers would be slim to none. The most important instance of this I can recall is the Elite outside Rarsaw, Ralph didn't really stand a chance against him (the battles in the game don't reflect this very well), but he was impressed by Ralph's actions in the fight and didn't want to kill him without seeing him act like that again.

I suppose in the situation at the end of chapter 4 Ralph could have called for help but I doubt he would have wanted to put his son in danger, so surrendering without incident seemed like the best choice to him.

I think first and foremost you should be making the game for yourself, the feedback should be a secondary concern. Especially as you're making an RPG Maker Game which seems to solely use the RTP Tilesets (not that that's a bad thing), these facts unfortunately means you're unlikely to get a lot of feedback no matter how much time and effort you put into it. Not that I'm trying to put you off that's just how it generally seems to be.

If you want to cancel it because you personally don't like it anymore or don't see it going anywhere then fair play to you, however if it's due to a lack of response you may be making the game for the wrong reasons (in my opinion).

Whatever the case I'll give the demo a shot and leave some feedback. I'd much rather do that than work on my own game right now. Also you might want to upload a version of the demo without the RTP included, 200+MB is pretty big for a demo.

Edit: You also might want to change the name for reasons that I hope are obvious. Although then you'd be letting them win. Whatever, your game.

author=Qirky
I'm really really impressed with this so far (I'm about 4 hrs in and I'm at the Cave to meet with Dale). I love that it's much more story and adventure driven as opposed to grinding you're way through dungeons. You've not pulled punches with the dark side of mankind and I respect that.

The mapping isn't out-of-this-world amazing but it's better than a lot of games, but without some signposting here and there, some sections can get confusing / repetitive.

Another gripe I have is one that I have with the RPG genre as a whole - who on Earth leaves sword and potion around in boxes eh? I like the 'bandit loot' thing though, it makes a bit more sense. I did like the shovel and digging up items but I haven't encountered it since leaving the desert area.

The dialogue can be a bit colloquial at times (and I can tell you're English!) but I laughed out loud on the odd occasion which doesn't happen a lot with games, not least amateur-made. Looking forward to playing more! It's inspired me to think about my old RPG Maker XP games and maybe trying to start them up again. Good work!

I'm glad you like it (so far), personally whenever I look back at Chapter 1 I find the dialogue to be terrible. Although I guess I can say the same for every Chapter that I'm not currently working on.

I'm not too fond of the standard RPG stuff like getting better equipment, fighting random encounters etc. but I kind of felt like I had to include it. I tone it down as the series progresses however I'm not sure whether that's really a good thing since as a reviewer has mentioned I don't really replace it with anything.

I forgot about the digging thing, I quite enjoyed that, might try and repurpose it in the next chapter.

Regarding the dialogue I was trying to make everyone sound really common, since pretty much everyone IS really common (at least as far as outward appearances are concerned).

I'm happy to see it inspired you to continue with your games, I don't think that's happened before so it makes me kinda proud.

I'm very curious as to what you'll think of the rest of the series.

author=Adina
How to get pass the guard that wont accept bribe ?

After you've talked to him you should be able to head south to the next screen and then you can climb the vines to the right.

author=RandomGamer1337
Uhh, how in the heckie do i get past the revived bounty hunters as David? The game seems to go unresponsive when the battle is about to start.

Is the game actually freezing or crashing? If so I have no idea why that is.

Otherwise you just have to let them kill you.

author=Linkis
I would iffin' I had a damn key :)

Honestly no, I THINK I've been all over the desert and spoken two to everyone.
Although that cheapass mayor refuses to let me in the chest next to this throne :(

Also, I've seen the entrance to a few other caves and a chest with a plank of wood on the top of a rock.
And, I did pull a switch that did something in a cave. I thought it lowered a blank for to walk over but I can't get across.....

If you go to where the Mayor is there should be some vines behind him, climb up them and you should be able to go to the next screen where the chest and plank of wood are.
Take the plank of wood and you can use it to bridge the gap in the cave with the chest.
Pages: first 123456 next last