Close
Just another RPG fan out there.

author=Fomar0153
There are two fossils - the Double Millenium fossil and the XP fossil - you get the first one in Fossil Forest and the second one you get from your rival after your third and final battle. You can only revive one fossil before the fab 4, after beating them if you return to the lab you can use the second fossil machine. There is a typo in the Brown Town Museum, I reffered to XP fossil as the Ace fossil by mistake.


Weird I didn't get a second fossil from the third rival battle...

01/03/2020 10:18 PM
I had a similar bug that unity mentioned above. I fought a Brickroad and catched it. However after the battle it prompted me to name a Cavedog and I had a Cavedog instead of a Brickroad in my party.
Where do you get Liberty if you choose Karsu?
Anyway this is a really fun game thank you :D

Edit: Where do you get the second fossil? I pretty much finished everything else but can't find it anywhere :x I beat the Fab Four and opened the other fossil machine already but the other fossil is nowhere to be found...

author=lowua
Not really sure what you mean about 0 Gold item at the shop. If you mean the accessory then that's because you can't buy an accessory so even if you try to buy it then it should just buzz. If you can actually buy a 0 gold item then that's a problem.

No I don't mean the accessory. It's listed on the consumable items below "Enemy Lens"
Show 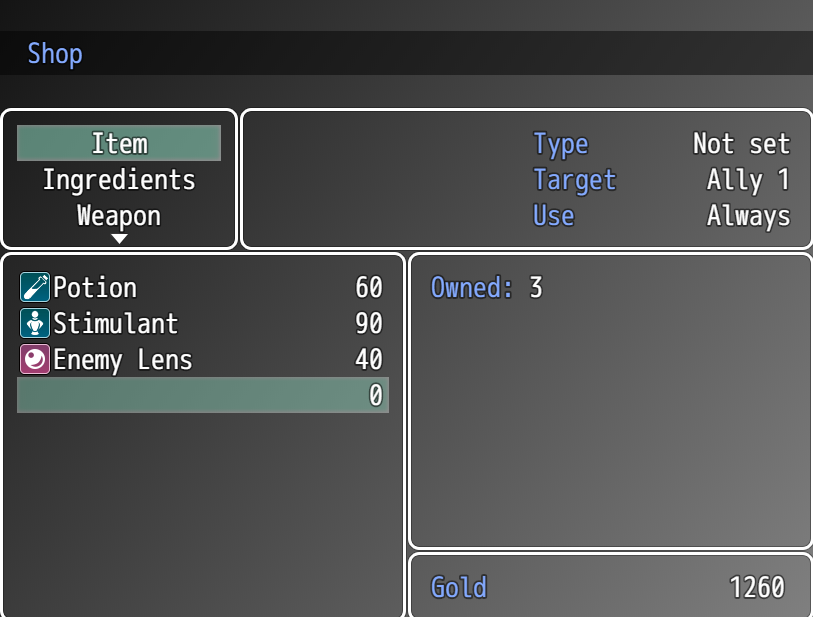 12/25/2019 09:22 PM
Game is decent so far. But I started getting an error that is quite annoying :D "Loading Error Failed to load: audio/se/Sound1.ogg" it only started popping up once I finished and came back from the western outpost.
Also there is an item without icon and description at the shop for 0 Gold.

11/28/2019 11:59 PM
The game is quite fun.
Show
I'm kinda stuck at the cemetery, though. What am I supposed to do at that boulder/cipher door/shovel puzzle? I can't dig up the dirt as he says he can't carry it. I tried pushing the boulder on the water fountains but that doesn't do anything.

03/04/2018 12:01 AM
I solved that issue by renaming that sound file as it was named "DS Enemy_s territory.ogg" I replaced the _ with a ' but I encountered a similar issue in that tech company in Gerudo Valley when using the Teleporter in the hidden passage the game crashes with the error failed to load img/parallaxes/Mountain2.png.

Other than that I feel like most players will be deterred from playing this for more than an hour. The random enemy encounters are just quite a drag. Especially in dungeons. Sometimes there are consecutive battles after making 2-3 steps and trying to escape will often fail and the enemy will get a full turn of free attacks so you kinda have to fight each battle.

What I did like so far was the different equipment for each character so you can build them either with elemental advantage against the local enemies or with high crit chance or with high accuracy etc. as well as some of the mapping and music. Also, finding all kinds of stuff when roaming around is always a nice thing to have (although the random encounters deter the player from roaming around)
Just my 2 cents.

11/24/2017 04:59 PM
Just played for about an hour. Ughh the random enemy encounters are just frustrating and reaaaaally time consuming. The first two bosses are a bit too sturdy in my opinion. You just spam the same move over and over and over and over again. It gets boring quite fast. Once you enter the cave of deception your save option gets disabled but when you exit the cave the save option is still disabled. Also, before solving the puzzle in the cave you get teleported to the North-East coast if you do the puzzle incorrectly. But once you solve it and make the chest appear it doesn't teleport you to the North-East coast anymore is that intended?