Played around with Construct 2. Wonder if I could make a metroidvania game with it someday.

Dunno if it's the best for that, but after playing around with it, it seems like its something I can use at least!
Roden

Have you looked at Stencyl? It was pretty easy to learn when I tried it years ago.
unity

On a more serious note, I cannot remember how packaging and distribution of games worked with that engine. Probably because I never messed with it! Then again, it was an engine made in the floppy era, so, I can only image that games were designed to fit on floppies.
slash

Is it? I thought it was mostly prewritten commands (move left, change sprite, etc). But, I haven't used it in years, so I don't know for sure.

A Metroidvania would be a lot of fun but super tricky to do level design for! I'd like to do one someday... I played the new Momodora over the weekend and it was really good so now I'm feelin' it :D
Red_Nova

Close
06/27/2016 01:19 PM
I made a Clue clone in Game Maker for a school project a few months ago. Yeah, there are a lot of event commands we could use, but they were so restrictive when trying to make game objects interact with each other that we were better off just writing our own code. It was kinda annoying since Game Maker has its own modified language, but whatever. The language itself was easy to learn.

You CAN use event commands in Game Maker just like you CAN pick your own lock in your apartment instead of using your key. Writing your own code is just faster and more efficient. In my experience at least.

I suggested Stencyl because, while it's also rather code-heavy, the process of writing the code is done by clicking and dragging event command blocks and fitting them together, Tetris style. The program then write the code based on how you arranged your blocks. It's a lot easier than writing code from scratch because it won't let you fit together blocks that wouldn't make sense from a code perspective, so the chances for error is much smaller.
unity

Close
06/27/2016 01:25 PM
As someone who is code-dumb but who might like to try something different than RPG Maker, it's hard to find a good engine for this stuff. I'm also tempted to try Unity 2D but the code part might totally kick my butt XD;;
Red_Nova

Close
06/27/2016 01:58 PM
Unfortunately, if you want to delve into other engines, you're probably going to have to learn some coding in order to create the kind of games you want. Unless you can find/pay someone to code your game for you or look for started packs full of scripts, then it's going to be an eventuality. Granted, I haven't looked too hard for resource packages for Stencyl or Game Maker, so it could very well be possible that you don't need to.

Fortunately, coding itself is not all that different from eventing in RPG Maker. The biggest difference between the two is actually writing out the commands instead of selecting them. You don't need to be Yanfly or Tsukihime to write code. Reading the flow of logic, though, is very important.

The thing about RPG Maker is the massive list of scripts that are already made to immediately get started on your RPG. Broader game development engines don't do that since the goal with the engines is to make more than just top down, turn-based RPGs. 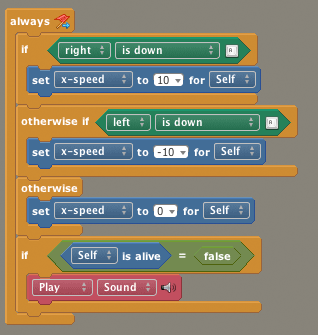 This is a Stencyl code block to move a character left and right as well as play a sound effect when it dies. You don't need to learn a language to code here, just do some RPG Maker eventing and you've got your code written out. If you can read this and understand what it does, then that's about 80% of the coding knowledge you need.

Unity 2D and 3D are both in a 3D space, so they're essentially the same engine. Though I know that Unity has a bunch of premade assets and scripts for you to get started with, so there's a lifeline for you.
slash

Close
06/27/2016 02:57 PM
Yup, I definitely found that moving from RM's event logic to writing code was a natural progression. The hardest part about writing code is learning logic, figuring out how to explain to the engine what you want it to do. For example, an "if/then/else" statement in programming is incredibly similar to RM's "Conditional Branch". A "boolean" is exactly the same as an RM "switch" - it's either True or False (on or off).

So there's hope! The other tricky part about programming is learning syntax (making sure you put semicolons at the end of lines, put the right number of equal signs, etc.) which pretty much just comes from practice and study. I'd argue that logic is way more important (and trickier), and since you've already got a head start on that you may be better off than you think :D
Cap_H

Close
06/27/2016 04:16 PM
I always wanted to try Construct. Even before I started with RM. There were some fancy projects over at Moddb I followed. I don't know if any of them was finished. They looked polished in opposite to Construct's on-site demos.

Close
06/27/2016 07:21 PM
unity, the cool thing about Stencyl is the StencylForge webspace that comes with it. People have written behaviors/code for things that you are free to borrow and tweak to your needs. Also you can generally go to the forums and get help for things, the same way you can get help for RPG Maker here.

My only real complaints about Stencyl is that the event interface can be a bit clunky and being still in beta, it crashes from time to time for seemingly no apparent reason, but it's pretty good at what it does. You can also make mobile games with its built-in resolution/touch screen options. :D

Other than that, I'd also recommend you look into Clickteam Fusion, though as my only experience with that comes from using the outdated versions I don't really know what the state of that thing is.
Pages: 1