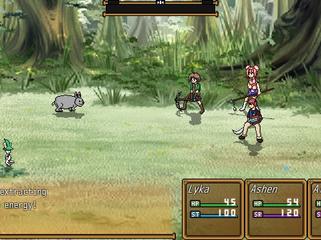 About windowing / fullscreening, I've made it to be toggleable via option. So don't sweat about which button will do for it.

And the turn order... I've thought of that many times, but I'd say I have to drop that... I can't give too much power on that. Plus, it can be pretty hard to implement one presentation-wise. I want the player to read the enemy, and vice versa. I want to give both of them the same level of information available! The enemy, in programming case, commands first. They can only guess based on the situation. I want the players to be like that too. But giving the turn order early break that purpose. I can make enemies' turn shown after the done command is selected, but that's pretty tasking.

And about speed altering, not only speed-increasing stuffs, but speed-decreasing stuff as well. The next demo probably won't feature that yet (learning curve here). But I can't let it not in the full game since speed is the key to know the gap of turns between enemies and allies. I'm sure that in some cases, being slower is better.

10/10/2013 03:17 PM
@suwako:
You can assume that the sound effects and the battle theme are temporary (*cough*theSFXsarerippedstraightfromsubterraneananimism*cough*). The game already had it's own original battle theme, though ;)
And the tutorials have been refined too. ... Talk about the demo's progress... Oh man, gotta rush for drawing the bosses' spritesets! But with the crews are in mid exam and me being horded with university stuff... No, this game will have the next demo at November.

09/30/2013 04:31 AM
Now it reminds me of Chantelise... The game uses sprites for Lise that her attacks' hitbox gets ambiguous! To note, Chantelise is similar to your game here, 2D sprites for 3D environment and gameplay.