author=Mikemc
How come I don't see Monopoly on the list?
"The most hated ambitious game on rpgmaker.net" :D

Yeah, we were wondering what happened to this too, Lol. The short answer is, currently, the only available version we have of it runs on Windows XP and below. Addit plans to re-release the game without the molebox eventually:

I'll eventually include this in the gamingw collection once I finish rehauling this thread.
LordBlueRouge

Close
11/11/2020 03:29 AM
Hi TheGameArchivist, I sent ya a private message through RMN's mailing system about something you might be interested in - If you're not interested, no worries, no need to reply. I just thought I'd try and help out with something. Thank you guys again for trying to find an solution to sorting out these games. I think I might be able to finish this by December at the latest. It's just very slow methodical work at the moment.

Just to go off on a small tangent; Today while going through hedge1's uploads, I found a really cool Action Battle System by Litearc? I'll probably a animated gif of it later. I just wanted to know, is Litearc still making games? This little demo was really impressive. It's a shame no one took this and made it into a full game.
solenoid
0

Close
11/11/2020 03:29 AM
Hi,
I hope this is the right place to ask about this. I'm looking for a game I played about 10-15 years ago that I believe was made in RPGMaker. I can't remember the title but can remember some details of the game's presentation and plot:

- Medieval fantasy setting
- PC is blonde-haired silent protagonist
- Your first party member is named 'Bard' or 'Geoff', who has been evicted from his house and joins you on your adventure - this character also appears in the titlecard for the company/person that made the game
- First part of the game takes place in the swamps to the west; endgame takes place in the northern part of the starting town
- PC is searching for 'red thread' or 'red yarn', which is an object of some power
- The mayor of town turns out to have been in possession of the red yarn all along, this character is the final boss
- There's a red skeleton character that I'm pretty sure was named 'Red Skelton', like the actor
- Fairly stock-looking RPG menus and battle system/mechanics

It's entirely possible that the game was made in Game Maker or something of the sort but having played more RPGMaker games over the years I'm more positive that it was made in that engine.

Thanks for reading, I really hope someone can help me find this!
TheGameArchivist
0

Close
11/13/2020 02:29 AM
I'm intrigued. I'll do my best to help you. I need a bit more information though. Do you remember what website you got this game from? If not that, at least which ones you used to get games from?
solenoid
0

Close
11/13/2020 08:25 AM
Thanks TheGameArchivist, I really appreciate that. I believe I got it from a site like Download.com or MajorGeeks; I can't think of any other site names at the moment. Given the scope of the game it was probably distributed by a couple of those freeware/shareware sites that were prevalent at the time. It's also possible that I stumbled into a site dedicated to sharing Game Maker or RPGMaker games, but I doubt that since I don't have strong memories of playing any other games of this ilk.

Let me know if you need any more info/clarification. Btw if you'd like, we can take our conversation to PM.
TheGameArchivist
0

Close
11/13/2020 01:02 PM
That's worse than I had hoped actually. =S What I was hoping to do is scrape an archive of a site like gamingw or another rpg maker site and to find it by your description.

I went through the archives of download.com and majorgeeks.com and couldn't find it. download.com wasn't fully archived for their entire rpg list, so it is possible it was on one of the pages I could not access. download.cnet.com still has a bunch of games, but I didn't find it from looking quickly through it. Earlier in majorgeeks life, they didn't have games on the actual majorgeeks site, they had a link for games to a site called demonews.com. That site still exists, but it doesn't have RPGs older than 2014, and when I went and looked at an archive from 2008, I couldn't find it.

I'm at a dead end at this point. I did a bunch of google searches too, and that didn't lead anywhere. Saying that though, if you want to try to look for it, use https://web.archive.org and search possible websites and dates for when it could have released and search through what has been archived. If you come across it, maybe the name will trigger something that I won't have.
LordBlueRouge

Close
11/17/2020 07:36 AM
Howdy, does anyone know about a game called Vaporwave Simulator? I was recently uploading stuff to my dropbox when I found a copy of the game on there. It released back in 2016 and it's attributed to a tumblr link that no longer exists. What further mystifies me is that there's no creator attributed to it (as far as I can find) besides the game's own old tumblr. I'm planning on uploading this thing on here and itch, but I'd want to know who originally created it to give more proper credit.
Gari
0

Close
11/17/2020 09:34 AM
It might be something totally different, but it might be a prototype for this game released in 2018 by ETGgames : https://store.steampowered.com/app/766850/Vaporwave_Simulator/
You may want to resume it or give a screen to help more knowledgable people.
scitydreamer

Close
11/17/2020 01:51 PM
Here's some screenshots I posted on Twitter. It's not likely to be a prototype, because this is a game with an actual story as opposed to the solely exploration based game on Steam. I also tried looking through the game files to see if there's any attribution, but there's only credit given to resources used. Along with the screenshots, I'm putting a screen of the readme that came with the game: 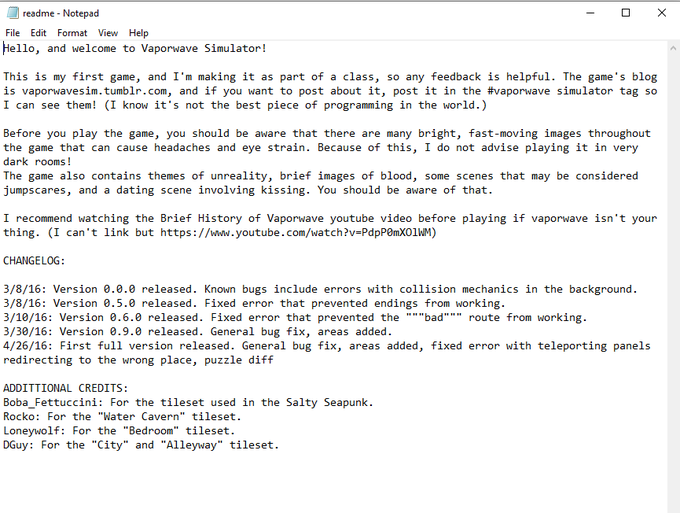 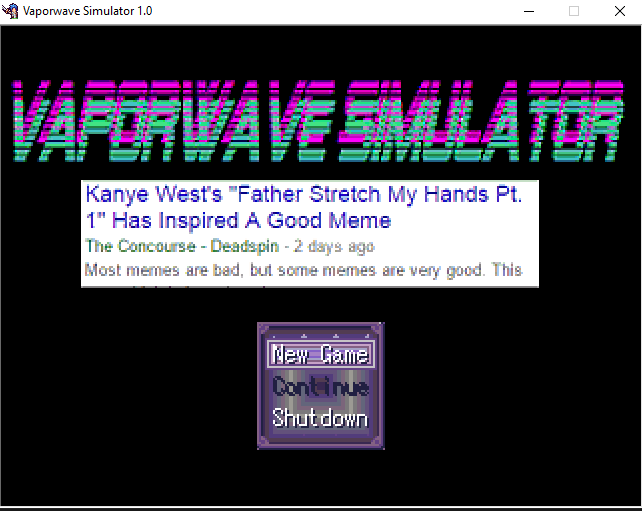 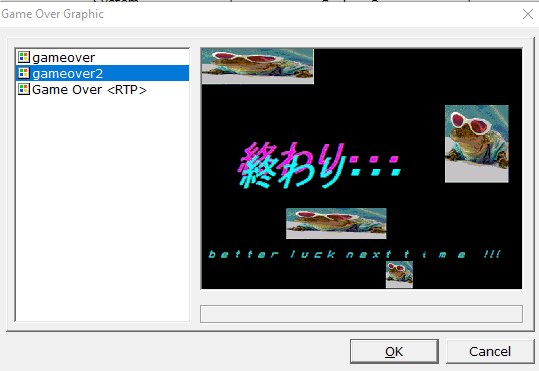 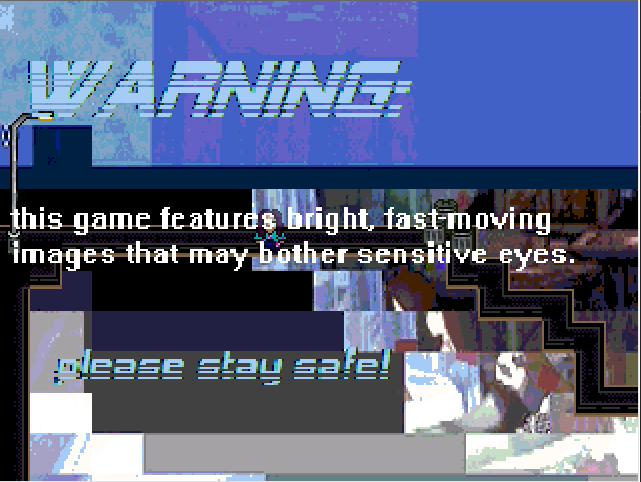 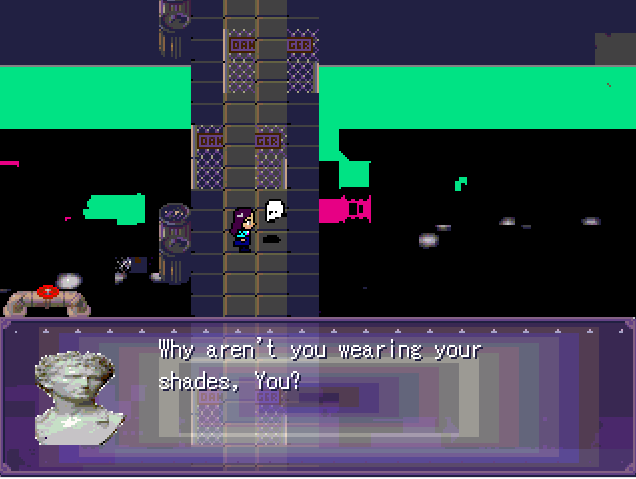 Close
11/17/2020 07:13 PM
a 2k3 vaporwave game returning from being vaporware after getting released is just so apt
TheRpgmakerAddict

Anyway seems a cool game to me! :D
scitydreamer

Close
11/20/2020 12:43 AM
Hey, so update, I actually managed to track down the original creator and talked to them over tumblr! I guess you can expect Vaporwave Simulator to be up here. 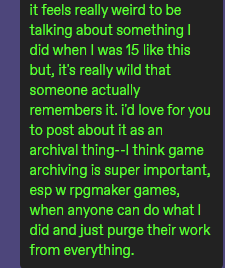 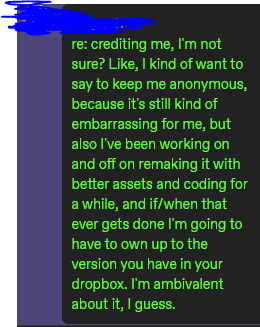 Close
11/20/2020 05:41 PM
Very very cool stuff here. Warms my heart whenever I see you guys help each other out like this. Hope to see Vaporwave Simulator uploaded here soon.
TheRpgmakerAddict

I'm looking for this one in particular as well. It was a "2d platformer" in RPG Maker (the poorly made kind). Does anyone have this too?
Gari
0

author=Gari
You can find it here.
I remember of a web (flash ?) game that emulated the first game.

Yeah, I only have it posted to itch because the game's mapping does not meet this site's standards, and well, I can't exactly fix that.
LordBlueRouge

The only game I seem to be having a problem with is Initial Fantasy v2.0. It's been available in anyone175's downloads twice. But whenever I open it, I keep getting a winrar error, as if I downloaded improperly?

it's 2.66MB and roughly 86 files or more. I haven't tried to play it yet, but it "looks" okay. But yeah, if anyone has more info on this game let me know. It's not a big problem, but it is one of the games from the missing games list and I just wanna make sure everything is there for anyone who happens to be looking for this.

EDIT: As a sidenote, TheGameArchivist, I don't know if you had a chance to check your mailbox yet. if you're reading this, I sent ya a response to your email: go with plan B! they'll be more duplicates but it'll be easier to get out of the way.
Pages: first prev 1516171819202122232425 next last
Forums :: What's Happening in Game Make & RMN
Back to Top