A Night Near the Woods

A night near the woods... and in other fantastic places!

Two years ago I reviewed Doge Quest, a game by JustAShyDoge with protagonist Doge and Cate the cat. The two return with their friends Riggy the wolf and Shibo, who will be the playable protagonist of this story! First warning: this was an event game made in a short time for the 2018 Twisted Fairy Tales Event.

The game begins at Halloween, when Shibo has to make an rpgmaker game for a contest but unfortunately his friends want to put on some costumes and enjoy the night trick-or-treating. But something goes wrong and his friends suddenly disappear!
Where did they go? Uh apparently the only one who can help him is a rat that wants a kiss in exchange! But that's not all, soon it becomes clear that there is something magic in the air! 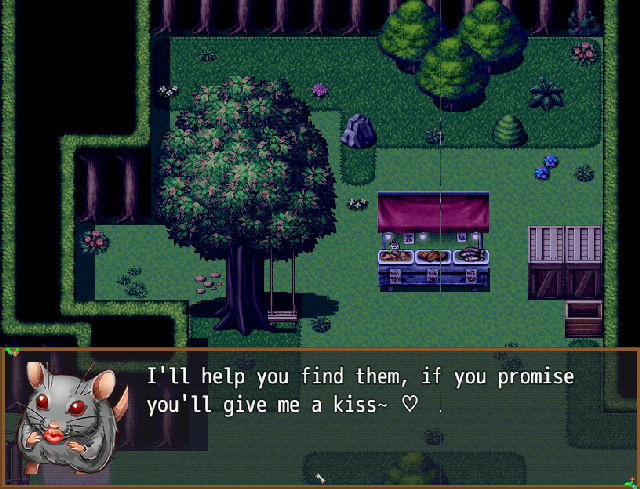 And that's when the real trip begins: the adventure is a wild dreamlike voyage in some strange locations using a weird train. It's not a horror game, but rather a sort of faery tale involving a witch and the (classic) repetition of the number three: three friends to rescue, three castles, three curses.

Concerning the gameplay this isn't much different from Doge Quest, except maybe for the absence of combat: you go around, explore, talk and solve simple tasks. It's a sort of interactive visual novel or walking simulator, just a tale in a playable format. You can also save anywhere and you do not really need to use the menu EXCEPT for a particular task.

Visually the game uses both Rtps an custom made sprites and edits, more or less like Doge Quest. For the music it's the same, there are some music that are taken from other sourcer and are pretty good! I also found mapping to be nice, except for some minor passability errors, little imprecisions or lack of some interactions in some places where it was expected, anyway it's the worse I could say of this game. Some parts are in fact really clever and interesting, and I admit I liked the whole plot and adventure even if a bit weird and mysterious in some parts.

Also game is not very long, as it took me 45-50 minutes to complete, anyway it was enjoyable as it each time made me curious to see what was going to happen next! 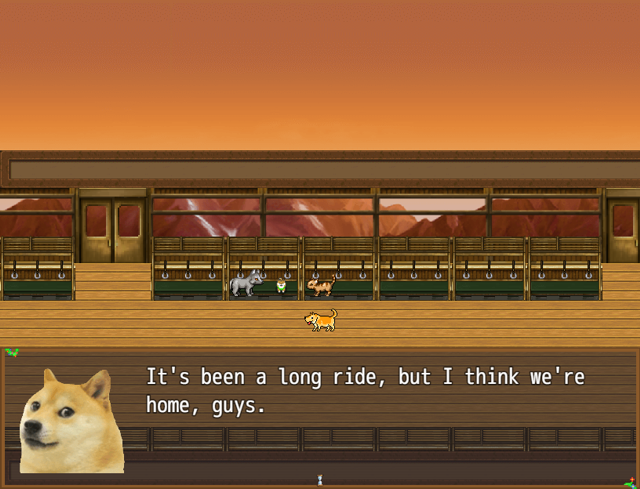 Yep! It's the end of this review! Get ready for the...

Final Verdict
A Night Near the Woods is a cute and fun short interactive faery tale. Oh and if you need there is also a walkthough, even if ok I did not need that but it was helpful to learn that I missed an optional minigame! Anyway what can I say about this game? It's a linear but enjoyable story about friendship, and I admit I liked it more than Doge Quest (the tasks were well-thought-out and also the pacing was good and setting was more interesting). So it's good... let's see the next one!